How about some homegrown, independent, authentically twenty-first century dance music?... 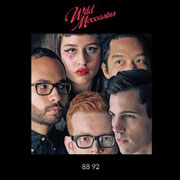 Disco is so back you’re probably sick of it by now, with it jumping the shark sometime last summer when “Get Lucky” by Daft Punk (QRO album review) was ubiquitous (even on The Colbert Report – though Daft Punk weren’t…).  It’s not just huge acts like DP: old artists such as Giorgio Moroder and Nile Rodgers (QRO photos) are getting new attention, while big indie-rock groups are all entering the discotheque (such as Arcade Fire’s Rephlektor – QRO review).  But how about some homegrown, independent, authentically twenty-first century dance music?  Look to Wild Moccasins’ 88 92.

The kids of Wild Moccasins (QRO interview) might be far too young to have experienced disco the first time around (’88 92’ might represent the span of their birth years), but that only makes their new album sound fresh.  There’s the bright disco on “Open Sesames”, “Eye Makeup”, and “Real” (the last one is sung in Spanish, or possibly Portuguese, in which case it’s probably pronounced ‘re-al’, as in the Brazilian currency), but the group can also go smooth evening disco on “Painless Mouth”.  88 92 is spacey on its title track, but there’s also the (slightly) more down-to-earth disco odysseys of “Sponge Won’t Soak” and “Emergency Broadcast”.  The group can even pull out a sitar on closer “When I Said I Saw It Coming”, or mix in indie-pop with single “Gag Reflections” (QRO review).

QRO has been following Wild Moccasins for a while, and they’ve definitely grown a lot (and not just in height) since 2010’s Skin Collision Past (QRO review), signing to New West Records and getting the production values that disco needs.  88 92 also sees Zahira Gutierrez almost exclusively take the mike over singer/guitarist Cody Swann.  And now they’re showing that disco’s future isn’t stuck in its past.