<img src="http://www.qromag.com/wp-content/uploads/2011/09/wildflagwildflagL.jpg" alt="Wild Flag : Wild Flag" /><br /> Let's face it: when we first heard about Wild Flag, we all knew they would come up with something great.... 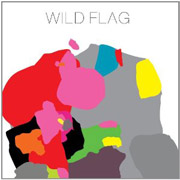 Let’s face it: when we first heard about Wild Flag, we all knew they would come up with something great.  Mary Timony (lead guitar and vocals) from Helium, Autoclave, and Mary Timony Band, and ex Sleater-Kinney Carrie Brownstein (rhythm guitar and vocals) are the forces behind this much anticipated project; and how can a collaboration between two of the greatest female artists of the last two decades disappoint?  To make things even more interesting, drummer Janet Weiss (also from Sleater Kinney, Quasi and Stephen Malkmus & The Jicks) and drummer-turned-keyboardist Rebecca Cole (from the Minders) joined forces with them.

Wild Flag are technically a supergroup, but they don’t feel like a supergroup at all.  They’re neither a band of nostalgia, nor one of those outlets for bored artists trying to kill time between their regular projects.  What make them special is that in spite of being around for so long, they managed to come up with new creative ideas and they play with such an energy that it feels like this is the first band they’ve ever been in.  The album may be reminiscent of Sleater-Kinney and Helium at times, but it’s mainly a fresh sound made of power pop melodies, classic rock riffages, ‘60s garage, psychedelic feel and a Patti Smith’s (QRO photos) type of punk sensibility.

Click here for photos of Wild Flag at 2011 All Tomorrow’s Parties in Minehead, U.K. in the QRO Concert Photo Gallery

Click here for photos of Wild Flag at CMJ 2011 in New York, NY in the QRO Concert Photo Gallery

Click here for photos of Wild Flag at Brighton Music Hall in Boston, MA on October 14th, 2011 in the QRO Concert Photo Gallery

Click here for photos of Wild Flag at SXSW 2011 in Austin, TX in the QRO Concert Photo Gallery

Click here for photos of Wild Flag at Brighton Music Hall in Boston, MA on March 7th, 2011 in the QRO Concert Photo Gallery

The four musicians have known each other for over a decade from previous collaborations (Brownstein and Weiss were in Sleater-Kinney together, Timony and Brownstein released The Age of Backwards EP as The Spells in the late ‘90s, and Cole and Weiss played in the ‘60s cover band The Shadow Mortons) or from simply being in the same music circuit.  The existence of Wild Flag (named after an E.B. White essay collection) was first announced by Brownstein on her Monitor Mix NPR blog in September 2010, and the band then toured the West Coast throughout November 2010, played SXSW 2011 (QRO recap) and released "Future Crimes b/w Glass Tambourine" on Record Store Day 2011, before announcing a much anticipated release date.

The self-titled album was recorded and produced by Chris Woodhouse at the Hangar Studios in Sacramento, CA last April: all tracks were recorded live except for the vocals, which gives them a more spontaneous vibe.  Without a bassist (like Sleater-Kinney), Wild Flag have put the emphasis directly on gripping guitar play, sparkling melodies and energetic drums.  Brownstein with her quivering roar and Timony with her characteristic witchlike deadpan couldn’t sound more different; generally speaking Brownstein-sung tracks are more energetic, instinctive and punk-y, Timony’s more melodic, slower and with a bubble pop vibe; yet on the whole record there is a cohesiveness, a harmony rarely seen in the recent indie-rock scene.

Lyrically "Wild Flag" is about emotional abandonment, getting lost to music, love and dance.  "We love the sound / The sound is what found us / Sound is the blood between me and you" from the album opener pretty much sums up the theme that runs through the whole record.  And there is a bit of girl empowerment in good Sleater-Kinney tradition, too.

The first song, "Romance", is definitely the catchiest, sunniest tune, which puts you in such a mood to dance and clap along.  It’s so contagious that you almost want to play it over and over again before carrying on with the rest of the songs.  It has an early ‘60s British garage rock vibe with a Wire-esque post-punk touch.

"Something Came Over me" is more subdued, mysterious, melancholic – typically Timony – with pop vocals, one riff jams and dreamy backing vocals; but things speed up again with the Brownstein-sung "Boom": Hammond-sounding keyboards in foreground, garage-y swirling guitars, powerful drums, beautifully throaty vocals make this one of the best tunes of the album.

Once again Timony switches to a slower tempo and a more ambiguous mood with the psychedelic "Glass Tambourine"; this song is wilder and more wide-ranging, with several steep tonal shifts, psychedelic guitar solos and a cryptic refrain that is a call to worship music but without taking it too seriously: "A glass tambourine / Don’t shake it like you mean / A glass tambourine / Don’t break it on the scene."

The album carries on with the joyful, Cars (QRO album review)-esque "Endless Talk" and its hypnotic organ-sounding keyboards, and then the garage-y "Short Version", where Timony blistering guitar and Brownstein shivering bark seem to fight for control of the song while Weiss dashing drums incite them to go even higher, louder.

In "Electric Band" all the instruments (drums, first guitar, Timony vocals, second guitar and keyboards, in that order) engage one-by-one in this beautiful fanfare, which both musically and lyrically is an open invite to join the Wild Flag adventure; "Future Crimes" is a stunning crescendo of passion ("I want to feel this again, just like a heart attack") and desperation ("I’m so hardwired to be alone" and "My limbs are inside out") till the chills-giving final outburst: "If you’re gonna give up this fight / Then I’m gonna call you a liar".

Then, just when you expect things to slow down as the album approaches its close, you have the jammy, funnily sexy "Racehorse": propulsive drum beat, Brownstein vocals that sound like a modern version of Horses-era Patti Smith, two guitar lines (one laying down a resolute, abrasive rhythm, the other fuzzing like crazy), and keyboards that after being in the background for the first half of the song suddenly go all psychedelic and wild.  The clearly Helium-esque "Black Tiles" is the perfect closer, with Timony and Brownstein beautifully co-singing and trading riffs so catchy that will stick in your head for days.

In the indie-rock world made of hipsters trying so hard to be cool for the sake of it and to be part of the scene more than anything else, Wild Flag are such a pleasant, promising surprise.  Their debut album not only is definitely one of the best of the year, but also probably one of the strongest debuts we’ve had in a while.