<img src="http://www.qromag.com/wp-content/uploads/2010/06/wildnothinggemini.jpg" alt=" " />Wild Nothing, the moniker of Jack Tatum's solo project, is one of the best incarnations of what the Internet likes to label as C86-influenced,... 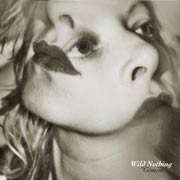 Wild Nothing, the moniker of Jack Tatum’s solo project, is one of the best incarnations of what the Internet likes to label as C86-influenced, 4AD-loving, glo-fi pop.  Wild Nothing’s debut, Gemini, sounds ambitious enough for the 21-year old, but Tatum has already worked with arty punk act Facepaint, as well as under the guise of country/folk-tinged pop, Jack And The Whale.  We may find the Virginia Tech student with another handle next year, but for now, Tatum can bathe in the warm buzz of Gemini.

Self-professed to the influences of the eighties, and early nineties dream pop, and post-punk bands, songs like “Our Composition Book” and “Gemini” find Tatum conjuring Johnny Marr’s signature treble guitar riffs.  On “Drifter”, Tatum’s falsetto gets very high to emulate operatic vocals of Liz Fraser, in this very Cocteau Twins-like piece with an homage to Peter Hook’s bass work in New Order.  When Tatum is not channeling the shoe-gazing icon, his airy voice recalls at times Stuart Murdoch of Belle & Sebastian, as well as Johan Duncanson of The Radio Dept. (QRO album review), though with markedly more passivity.  His detached crooning at times suffers, like in the moody opening track, “Live In Dreams”, in which Tatum impassively sings, “I’d rather live in dreams / And I’d rather die”.

Click here for photos of Wild Nothing at 2010 Primavera Club Festival in Barcelona, Spain in the QRO Concert Photo Gallery

Click here for photos of Wild Nothing at 2010 Truck Festival in Steventon, U.K. in the QRO Concert Photo Gallery

Click here for photos of Wild Nothing at Governors Island in New York, NY on June 19th, 2010 in the QRO Concert Photo Galleryy

Lots of attention and details have been put in the synth-driven Gemini, and each track ebbs and flows harmoniously, but not all twelve songs sound fully developed.  “Pessimist” is one of the muddier pieces that serve as a breather, between the otherworldly “Drifter” and the sunny playground anthem, “O, Lilac”, that could have easily been omitted.  The more inviting “Bored Games”, with its pulsating, electro-dance beats and repetitive progressions, is another track that could have been left in the cutting room.  The sadly beautiful upbeat ballad, “Chinatown”, stands out, with hooky, irregular rhythms that sound as if large wooden chopsticks are having a sword fight, and finds Tatum in his most emotional vocal delivery, sorrowfully pleading, “I need to keep you here / I need to picture you still…”  The most jingle-jangle of all on Gemini, “Summer Holiday”, will have the listeners comparing Wild Nothing to The Pains of Being Pure at Heart (QRO live review), exuding sweet and carefree innocence of youth.

Though Tatum’s melancholia clouds over Gemini, the shimmer of the high chords, the airiness of the guitar riffs, and the bouncy rhythms, make this a great summer record, as you roll around the sun-drenched green pasture in elation, forgetting that you’re an adult now.