NYC’s Wilder Maker has been on a journey since 2014 and their latest full-length 'Male Models' listens like a Polaroid essay of the trip.... 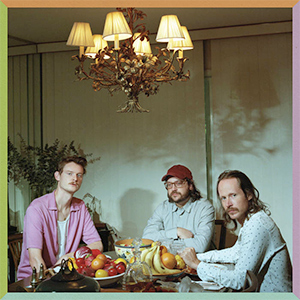 NYC’s Wilder Maker has been on a journey since 2014 and their latest full-length Male Models listens like a Polaroid essay of the trip. The sights seen, friends met along the way, the memories not to be forgotten. Slimmed down to three members, the band takes a more direct line to the pop jugular than previous album outings like Zion. There are no 12-minute barnburners like “Song for the Singer” off Year of Endless Light. The net effect, like most photo albums, is a bit motley. But when it hits, it hits more like your favorite mixtape from your favorite rapper than as an indie rock album concept. All bangers, no filler.

Male Models has so many cameos Wilder Maker needs a guest book in the studio. Mutual Benefit, Felicia Douglass, V.V. Lightbody, Adam Duritz, and Katie Von Schleicher. Von Schleicher is first among equals, having been a member of Wilder Maker for multiple prior releases. She gets back into the groove on “Against Numbers” (QRO review) and “Silver Car”. The shaggier edges of previous outings are traded for tighter corners and more pithy songcraft in “Against Numbers”. He/she vocal doubling adds a satisfying sonic depth to the lyrics. And four layers of bass saxophone establish a Wagnerian-type flugelhorn platform to launch a ripping guitar solo. The musical phrase making has a clipped quality, like the soft, warm, fleshy contours of your ear are being boxed into a hard, cold, metal frame.

File “Silver Car” and “Scam Likely” under Brooklyn Country. In the former Von Schleicher delivers Americana balladry with a voice that brings a breathy vulnerability to a world weary worldview. A falsetto chorus closer elevates the track into curious spheres. Gabriel Birnbaum fires up the honky-tonk on the latter track. “Scam Likely” sports a roadhouse riff that plays backdrop to old-fashioned singer/songwriter storytelling.

Nowhere is the stripped-down song construction more evident on Male Models than in “A Professional” and “Static”. The former features Felicia Douglass (Gemma, Dirty Projectors, Ava Luna) on vocals against a clean beat, a melody intimated, delivering a refrain that sings like an adult lullaby. Wilder Maker can do complex and epic and decadent (see “Women Dancing Immortal” off Zion), but it’s all business on “A Professional”. In “Static” Chicago’s V.V. Lightbody joins Wilder Maker to narrate a slice of day drinking life among the bruncherati. The guitar riff propels Lightbody’s storytelling into the foreground, a story of pleasures riven with regret. Her voice holds itself in reserve on the verses before opening up on the refrain, revealing the wry self-awareness of the actor who tries to wear the tragic and comic masks all at once. A howling guitar solo takes us to commercial.

Male Models takes us on a trip, and the final track “Jason” is an understated statement song. The final stop at the end of the road. All the more appropriate that it’s a quiet solo number by  frontman Gabriel Birnbaum. A spare keys motif sustains a baritone reflection on the road traveled and the road ahead. The central protagonist of the song, Jason, could easily be an avatar for musician and audience alike, who struggles to know and be known in a world of passing acquaintance. The indignation that comes with feeling misunderstood is only chastened by the great difficulty of disentangling the self we project from the self that we are. It’s a fraught relationship and no solution is in sight. But what remains is the music. Each guest spot on Male Models punches its ticket in recognition of the solace art provides. Hop aboard and enjoy the ride with Wilder Maker.