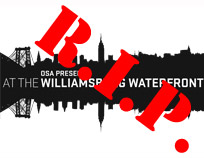 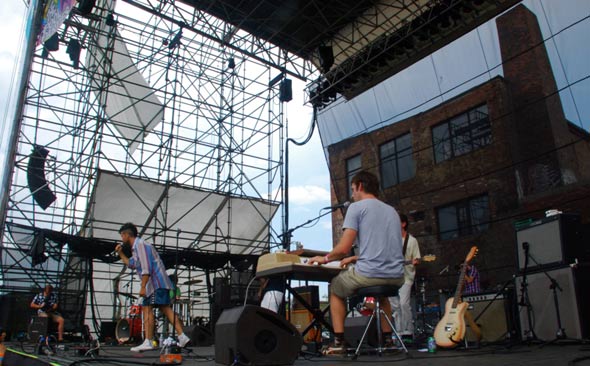 Note: Williamsburg Waterfront was replaced as a concert by Williamsburg Park, now named 50 Kent, between North 11th and 12th.

The entrance to Williamsburg Waterfront is on North 9th Street and Kent Avenue, just off the East River.  An empty, half grass/half concrete waterfront space, it is a New York State Park, currently with proposed, but not yet implemented, redevelopment plans.  While it held a few events before 2009, such as Boredoms’ ‘88 BoaDrum’ East Coast performance of 88 drummers on 8/8/08, it was really opened as a major New York City outdoor venue when Jelly NYC moved their Pool Parties there in 2009, from the being redeveloped McCarren Park Pool to the northeast.  In 2010, the stage was moved and upgraded, and paid events began to booked there as well.  Unfortunately, that was the last year of Pool Parties there, but there have been a few free shows in 2011 to go with the paid events.

Stretching over two blocks south, and from Kent Avenue to the East River, the ground is sometimes concrete, sometimes grass, though there is a building, a warehouse converted into the ‘All-Star VIP Pub’ during Pool Parties, in the middle along Kent.  The southern side of the space is the ‘beer area’, fenced off with a space in between it and the regular area, and one can only enter through a turnstile in the middle (after getting a 21+ wristband).  The western, seaside edge contains food & water vendors and port-a-potties, which are also in the beer area, with a wide variety of food on offer (though one has to purchase drink tickets first).  To the east of that space is the VIP area, which has its own connection to the main area/photo pit.  The stage itself, moved from the western side to the eastern side of the park in 2010, as well as being much expanded into a full, ‘proper’ outdoor stage, with serious scaffolding and side banners, and a large photo pit, is right next to the lone building.  To the north is a separate-entrance area (which stretches all the way to the river, and down along it for all of the space) where you can bring in your own food & drink – they’re not allowed in regular area.

Williamsburg Waterfront seriously improved in its second year, most notably in the much improved stage – having a semi-real back to it means the sound disappates less (though lack of sidewalls still means some outdoor dissappation).  The stage is higher as well, creating a better view, and while you don’t get the Manhattan skyline in the background anymore, you also don’t get the sun in the background, either.  The place also benefits from being further removed from McCarren Park Pool, timewise, and so more judged on its own merits.  Security is still fairly strict, as it is a state, not city park (thus the ‘beer area’, and quicker hook because of rain), but better organized (though all the fencing can make one feel like they’re cattle, or in a prison yard).  It also fairy close to the Bedford Ave. L stop, and the river gives a great, constant breeze.  We’d said in 2009 that Williamsburg Waterfront would only get better, and it has. 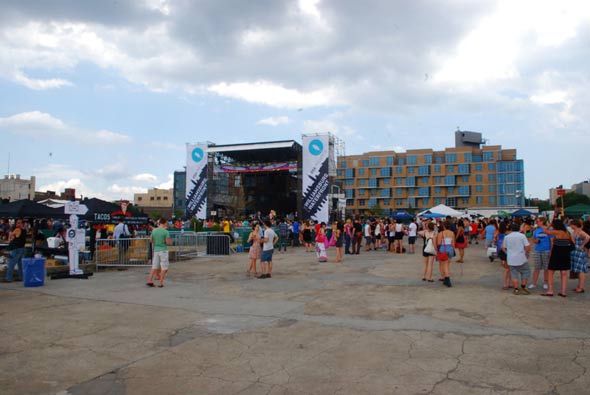 Mission of Burma – “That’s When I Reached For My Revolver”, Williamsburg Waterfront, Brooklyn, NY, 7/12/09