Amid a new layer of electronic eccentricity, Wintersleep has finally revisited the excellent form and sound of breakthrough record 'Welcome To The Night Sky'. ... 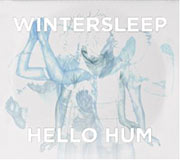 “Hello Hum – I am the dying lung of the town you left,” declares Wintersleep’s Paul Murphy at the start of the band’s latest offering – “I can only find you if you’re looking for me.”  While those words set the stage for yet another excursion from the band’s back catalogue, Hello Hum instead marks a reinvented return.  Amid a new layer of electronic eccentricity, Wintersleep has finally revisited the excellent form and sound of breakthrough record Welcome To The Night Sky.  Although in-between-er New Inheritors (QRO review) had some serious standout tracks, that album lacked the cohesive quality that both Sky and Hello Hum hold.  Much like their shift from acoustic reckoning to a heavier synth pop on 2005’s Untitled record, New Inheritors came from a transitional time, one meant for getting feet wet in a new sound.  Instead of a mere splash, Hello Hum makes for a tidal wave of electro infused pop rock.

Click here for photos of Wintersleep at Terminal 5 in New York, NY on April 4th, 2013 in the QRO Concert Photo Gallery

Click here for photos of Wintersleep at 2012 Osheaga Music Festival in Montreal, PQ, Canada in the QRO Concert Photo Gallery

Click here for photos of Wintersleep at SXSW 2012 in Austin, TX in the QRO Concert Photo Gallery

Click here for QRO’s review of Wintersleep at The Market in Fredericton, NB, Canada on November 13th, 2010

Click here for photos of Wintersleep at Terminal 5 on August 1st, 2008 in the QRO Concert Photo Gallery

A number of small additions – from phasers straddling a heavy rhythm section in “Hum”, to synthesized-chimes ringing out on “Resuscitate”, crazy amounts of delay on “Smoke”, and anthemic gang vocals throughout – coax out a fuller sound here, while the actual tone of the music is much more pronounced, taking on a stoic sort of sadness that somehow breeds more understanding than anything.  These feats can largely be attributed to the production union of Tony Doogan and Dave Fridmann – while the former brings half a decade’s worth of a working relationship with the band, Fridmann in turn presents the Wintersleep with an unquestionable resume of channeling some of the most affecting popular music of the last twenty years (See Flaming Lips’ The Soft Bulletin).  These complementary forces result in the band’s biggest sounding album to date, and while the guy’s are no stranger to this quality in their music, this offering comes with an endearing effortlessness to a degree they’ve never before met.

More simply, and perhaps most importantly, this record remains true to the idea of Wintersleep while also expanding on it.  In doing so, Doogan, Fridmann and the five gents at the band’s helm have arrived at one of the best Canadian albums of recent memory.