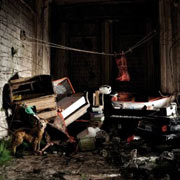 From their 2003 self-titled debut album, it was clear that Wintersleep had no problem with going against the grain.  Even in its earliest, most bare-boned incarnation, the five-piece’s sound rivaled a vast number of Halifax based bands who were busy basking in the Sloan-era pop rock years, when the city experienced an explosion of very similar sounding artists.  Wintersleep continued into 2005’s Untitled, which saw a little less modesty, and an increasingly commercial sound complete with pop hooks and a stronger instrumentation.  Though containing a few fan favorites, their sophomore effort failed to really captivate audiences, and Untitled acted as yet another foundation album.  The band did recover from their sophomore slump though, and Wintersleep released Welcome To The Night Sky in 2007, which earned the band a Juno Award and a strong international fan base, as well as some rave reviews.  The success of that third album pushed Wintersleep to a fork in the proverbial road.  With New Inheritors, the band neither surpasses nor fades, and instead forges an enviable new third path through the sonic wilderness.

Click here for photos of Wintersleep at Terminal 5 in New York, NY on August 1st, 2008 in the QRO Concert Photo Gallery

Despite hitting the studio with the same lineup, as well as having returning producer Tony Doogan, and with only three years between recordings, this latest album is very noticeably different.  Shredding guitars center an all-around heavier rock sound, while the addition of backing strings and the continued pervasiveness of synthesizers anchor a dreamy shoegaze like environment.  The band immediately shows that New Inheritors is more than just an extension of Welcome To the Night Sky; it is in fact a reinvention.  Though reminders of the past are prevalent – for instance on throwbacks like "Terrible Man" and "Blood Collection" – it is the band’s new sound that intrigues early on.  Powerful bass lines accent a haze of guitars and powerful percussion on prominent number "Black Camera", while the title track sees roaring guitars lead valiantly into an instant indie rock anthem.

The album is not without fault though, and this is clear on indistinct song "Trace Decay" which sees Wintersleep languish in the pit of pop/rock that dominates their hometown music scene.  Though they bail themselves out towards the end of the song, in doing so they play on the album’s other main shortcoming: instead of adding it to their wonderfully layered output, synth is sent out on a limb of power pop-esque spontaneity.  The result is a forced-sounding effort, which holds the album back on its first half.

The relative ambivalence of New Inheritors is torn asunder in the second half of the album, and thank goodness for that.  Wintersleep explode on a fiery set of songs, laden with evidence of growth, but that can also be traced back to what they were doing right last time around.  Their dreamier atmosphere is at its best on standouts like "Preservation" and "Echolocation", while invigorating guitar riffs duel and become one on "Mirror Matter".

Though ambivalence does creep in on the album’s unspectacular closer, it is not excessively detrimental to the overall outcome.  The album is essentially made up of a dozen enjoyable songs that may or may not live up to the standards set on Welcome To The Night Sky.  Small errors like a buildup taking too long, or fading instead of peaking, prevent the near perfection of the past.  Ultimately, New Inheritors is a showcase of admirable alt-rock songs that build into one of two outcomes: a fiery, anthemic climax, or a potentially explosive dud.  Thankfully, the band’s continued growth makes for more of the former and less of the latter.