Art met punk and energy met experience as the venerable, influential Wire opened up the 2008 season of the Seaport Music Festival. The London band has been making music for over three decades, but has seen some multi-year breaks during that time, most recently disappearing in 2004, when charter Wire guitarist Bruce Gilbert semi-retired.  But you can’t keep a live Wire down, and the band returned last year with their Read & Burn: Vol. 3 EP, to be followed up this July with only their second LP in over fifteen years, Object 47 (QRO review).  But before that drops, the band has been hitting a few festivals (QRO Festival Guide), including the inaugural 2008 show at South Street Seaport on Friday, May 30th.

As one of the first art-punk bands (they were post-punk practically before there was a punk to be post- of), Wire has had an influence on a wide, wide range of seminal acts, from hard-core icons Minor Threat to shoegaze definers My Bloody Valentine.  R.E.M. famously covered Wire’s “Strange” on their early classic, Document; early Britpop-stars Elastica infamously were sued for plagiarism for borrowing a little too deeply from Wire (the case was settled out-of-court).  The band itself has traversed in sound from the ‘Spirit of ‘77’ U.K. punk of debut album Pink Flag to electronica in the eighties (at shows, the band would play only new material, with a cover band that would play only their old material opening up); in 1990 drummer Robert Gotobed left because he thought a drum machine would be better (and the subsequent three-piece changed their name to “Wir”), then disappearing through much of the nineties (as many of the acts they inspired hit it big – or the acts those acts inspired did…), only to return in 2002 as four with Read & Burn: Vol. 1 EP and Send LP the following year.  Gilbert left after the Send tour, but Gotobed (now back to his birth surname, Grey), singer/guitarist/producer Colin Newman and bassist/vocalist Graham Lewis are back (does that make this “Wre”?…), with new guitarist Margaret Fiedler McGinnis.

And Wire certainly drew from all corners of their discography in their show at South Street Seaport, with the first half more drawn from this decade, the second half from their earlier punk and post-punk days.  The band opened with Read & Burn: Vol. 3’s “Our Time”, but the 2007 piece was as punk as anything from 1977.  They then went back-to-back with Send on the grinding “Mr. Marx’s Table” and ra-ta-tat-attack of “Comet”.  Their one real jump into the past in the first half was the nihilistic “Being Sucked In Again” (from 1978’s Chairs Missing) – as well as thanking the crowd for not taking the chance to see The Eagles, who were playing at Madison Square Garden (QRO venue review) that night (“In 1977, The Eagles were one thing to me – shit!” – Lewis).

Interestingly, despite the focus on the newer stuff early on, it took a little while before the upcoming Object 47 made its debut.  “Mekon Headman” was a little over-distorted, but the following “Perspex Icon” had just the right mix of electronic expanse and punk solidity.  What was doubly impressive was that it was the first time that song had ever been played, live.  Unfortunately, Wire slipped a bit with the too rough “Advantage In Height” (from the 1986 Snakedrill EP) and Send’s over-echoed “The Agfers of Kodack”.  But Object 47 that rode to the rescue, with the dark-rock of “All Fours” and the bold and brave first single, “One of Us”, whose anthemistic nature played particularly well at South Street Seaport.

From there, Wire shifted into the past.  The slower, grander “Boiling Boy” (from 1988’s awesomely-titled A Bell Is a Cup…Until It Is Struck) was a nice segue into an ending dominated by Pink Flag and 1979’s 154.  There was still an angular nature to 154’s “The 15th”, while Pink Flag’s “106 Beats That” was more of a punk anthem.  Even the one twenty-first century piece in the later portion, Read & Burn: Vol. 1’s “I Don’t Understand”, really played hard as the band went into their encore break.  Wire kept their Flag in the Pink when they returned with the drone-rock “Lowdown” and the record’s classic one-two/one-two punk yell finisher, “1 2 X U”.  And they brought out the record’s title track for the oh-so-rare second encore, saying it was something they played the very first time they’d played New York, and they enlarged the piece live.

Also see them playing “The 15th” 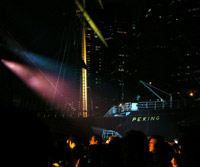 The DIY-punk theme in the later set extended to McGinnis experiencing old school technical difficulties with her amp, but otherwise, Wire was pretty high-tech.  Newman had an Apple laptop perched in front of him the entire time (he did seem to often be reading lyrics from it).  But what was most impressive was the light show.  You’d think an outdoor show at the not-normally-a-venue Seaport (QRO venue review) would struggle with such a thing, but the band had it in spades.  In addition to a swirling pseudo-spotlight and numerous colored lights that would swing right over the crowd, there were strobe lights and even smoke machines.  It was so intense that Lewis had to say (right when Wire shifted into older material), “The lighting guy, can you take it down a bit?  I’m getting epileptic up here…” 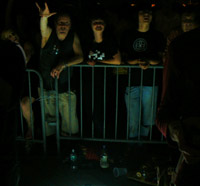 But it worked, matching nicely with the lights of the downtown skyscrapers and under-lighting that brought out the masts of the nearby sailing galleon.  And, in many ways, Wire were similarly a perfect fit for downtown Manhattan’s River-to-River Festival, as they brought together the energy of the young and artistic skill of the old in the diverse crowd.  It was actually kind of inspiring to see a mature, non-massive act like Wire bring the kids to a mosh pit, such as on “Understand”s great title chorus or “How many dead are alive?” anthem on “Pink Flag” (even if it did also bring out security…).  And while there might have been some lines on their face, the band was alive, running, jumping, and doubling up on the encores.  It all made a great kick-off to Seaport Music, River-to-River, and the 2008 summer concert season in New York City. 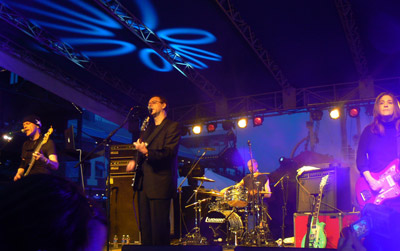