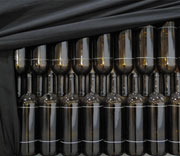 Just what is ‘post-punk’, anyway?  It came some time after punk burst onto the scene in the late seventies, so it would seem to have an early eighties origin.  But is it a reinvention of punk, or of what came before punk – does it even have that much to do with punk?  It seems to be whatever the early punk bands did after they stopped being so angry, but that takes in a wide range of sounds, from the reggae influence in late-period Clash to what became the first electronica in acts like New Order.  And what about more recent artists, those that started in the past twenty-five years or so – can they be ‘post-punk’?  Does one have to go through a punk phase first?

For a primer on post-punk, pick up the new Red Barked Tree by post-punk pioneers Wire.

Yes, Wire was born in the London punk scene of the late seventies, but long ago became post-punk, embracing effects and synthesizers.  ‘Art-punk’ was another term bandied about, but ‘art’ implies either prettiness or weird-for-the-sake-of-weird, neither of which applied to Wire.  The band went a lot of places, musically, in the late eighties and early nineties, before semi-retiring, with only 2003’s Send and a few EPs in this century/millennium.  That was, until 2008, when the band returned (albeit shorn charter Wire guitarist Bruce Gilbert, the first permanent change in the band’s history) with Object 47 (QRO review), an interesting but uneven reintroduction.  With Red Barked Tree, Wire’s post-punk stands a lot taller.

Tree/Wire/post-punk isn’t heavy for heavy’s sake, or speedy for speedy’s sake, but instead confident enough in its backline base to do interesting things above it.  There’s the echo effects to processional opener “Please Take”, and the more industrial ways atop “Two Minutes” and “Moreover”.  Tree can go low and restrained in the dark, somber “Clay” and “Down To This”, but also high, even touching, like with the light psychedelica “Adapt” or mixed melody “Smash”.  There’s an unnerving speed in “Now Was”, and an unnerving staccato in “A Flat Tent” (which has vocals that are oddly reminiscent of Modern English’s “I’ll Melt With You”…).

Some effects are better than others, depending on what you like best: harder industrial effects, proto-electronica, neo-New Wave, etc.  It does probably best come through in “Bad Worn Thing”, perfectly leveled, not too stripped, not too heavy in its post-punk pressure.  But post-punk can be many things to many people while retaining a cohesive identity, like on Wire’s Red Barked Tree.