Wish I Was Here Soundtrack 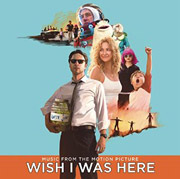 Remember Garden State, the highly successful independent film that launched the guy from Scrubs into movies and made you fall in love with Natalie Portman? Remember its soundtrack, which launched the career of The Shins and helped touching indie music in general? Well, actor Zach Braff finally followed up that directorial debut earlier this year with the Kickstarter-funded Wish I Was Here, a heartfelt movie that unfortunately left audiences wishing for the magic of Garden State. The soundtrack similarly didn’t make the huge impact that Garden State’s did, but is still a nice collection of songs.

James Mercer owed Braff after all Garden State did for The Shins, so of course the soundtrack opens with an original Shins songs, “So Now What”, which is some sweet and bright Shins, but not revelatory by this point. The record as a whole is mostly sweet but sad indie-folk that certainly has a theme (more so than most records by one artist), but can push that theme a little hard (like the movie). Better is when the album goes against its own grain, like the toe-tapping intimate folk of Radical Face’s “The Mute” or especially the Graceland (QRO deluxe edition review)-greatness of Paul Simon’s “The Obvious Child”. Bon Iver also contributes an original, “Heavenly Father”, but its somewhat overshadowed by the superior Bon Iver (QRO review) single, “Holocene”, also on the record. Coldplay created the film’s title track, and performed by Cat Power, it’s some clear emotion, if a little too clear.

Alternative artists peppering soundtracks is itself not a revelation at this point, after the success of Garden State’s soundtrack, and so this soundtrack couldn’t be the same size revelation anymore than the movie could be, but is still a worthy compilation.