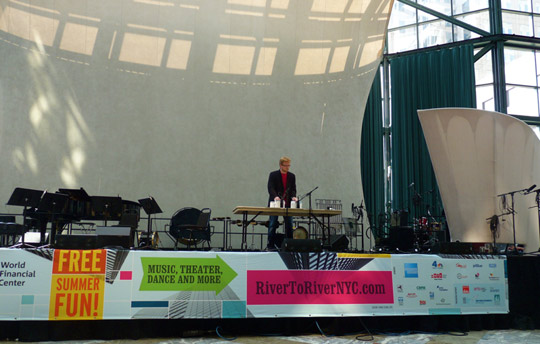 World Financial Center is located in lower Manhattan, between Vesey Street, West Street, Liberty Street, and the Hudson River.  It is a complex of office buildings located above an upscale mall, just to the west of the World Trade Center memorial site.  The actual venue spaces are located on the western side: an outdoor stage in the northeast corner of the outdoor plaza, and the Winter Garden, an indoor stage up against the western glass wall.  During the summer, the annual River-to-River Festival holds some concerts there (along with Castle Clinton, Rockefeller Park, and others), including the kick-off, twelve-hour Bang On a Can Marathon.  Other events occur occasionally throughout the year in the Winter Garden.

Both stages are notable for having a first-come, first-served seating area in the front, though the Winter Garden’s is larger (especially if one adds in the steps on the other side of the area), while the outdoor area gets a much bigger standing turnout.  Considering the name, it’s not surprising that World Financial Center has a top-notch sound system, and the lighting in the Winter Garden is remarkable, sometimes including a massive screen in front of the glass wall.  While the Winter Garden has people walking from different ends of the mall, the outdoor area is rather hemmed in, by the complex on two sides and a railing splitting the plaza in two.  Being a mall-cum-office complex, there’s no alcohol in site (in fact, the closest thing to portable consumption is a Rite-Aid on the other side of the mall), and the security guards are a cross between high-class mall cops and office building entrance security (neither of which is very welcoming, even for security people).  The outdoor area features a view of the Hudson River, while the Winter Garden has enormous indoor palm trees.

River-to-River features a wide range of musical acts, but the indie ones tend towards parks like Castle Clinton, Battery, or Rockefeller, or South Street Seaport.  While World Trade Center has featured more ‘rock’ acts like The Eels in the past, it mostly goes the ambient electronica route these days.  This plays to its limitations, like seating, non-rock audience, nearby businesses, lack of alcohol, high security – but also its strengths, like tech-friendly crowd, open ceilings, and excellent lighting and sound systems.  An unusual space – but pretty damn kick-ass for a mall. 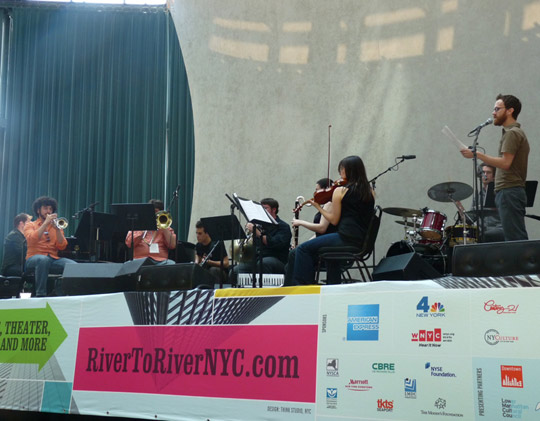 Audrey : The Fierce and the Longing