<img src="http://www.qromag.com/wp-content/uploads/2010/12/wovenhanddec10.jpg" alt=" " />Denver's Wovenhand arrived at Barcelona to present their latest work <i>The Threshingfloor</i><span style="font-style: normal">, where the band shows their folk side and add the sounds... 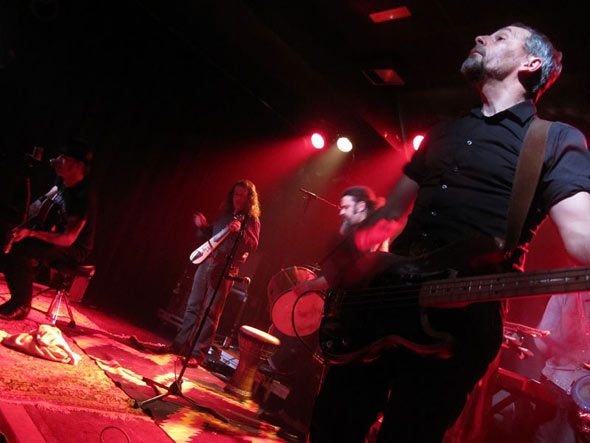 The live music experience is great for several reasons (choose the one you like) but one of the best things happen when a band changes a song and plays it differently or simply change the approach, that is, when a record is acoustic and then the musicians play it live with a full electric arrangement.  Masters of this are Bob Dylan or Neil Young, and on the other side we can find bands like Supertramp or Simple Minds (once accused to use playback during their 1989 world tour).

Denver’s Wovenhand arrived at Barcelona in the final stages of their current European tour to present their latest work The Threshingfloor, where the band shows their folk side and add the sounds they found in the East of the continent.  The support band was the Greek ensemble Seven Seas Duet, the project of musician Loukas Metaxas.  In a very short and minimalist gig – only three songs were played due to technical problems – the Greeks’ tunes reminded where Beirut’s Zach Condon (QRO photos) and all his copycats come from.

And at ten o’clock, like a Swiss precision wristwatch, David Eugene Edwards, Pascal Humbert and co. appeared onstage.  In other gigs, the quartet began straight away with songs from The Threshingfloor, but not in Barcelona.  The first notes of Humbert’s bass and the slight feedback from Edwards’ guitar revealed a cover of Joy Division’s "Heart and Soul".  Brutal, harsh and raw, it would’ve fit in Peter Hook’s 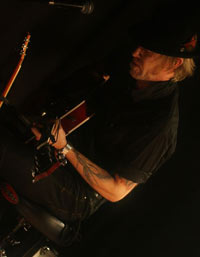 repertoire when the Mancunian toured Europe playing Unknown Pleasures and other JD’s tunes.  From then on, the next five songs the former members of Sixteen Horsepower played were those that begin their latest work, in chronological order: "Sinking Hands" – gloomy and dense – "Threshing Floor" – enormous and with a hypnotic bass line courtesy of Humbert – "A Holy Measure" – one of the tracks that differed the most from its original studio version, as it sounded like primitive Metal in some sections – "Raise Her Hands" -another number in which Edwards really looked to be in trance – and "His Rest" – one of the most ‘relaxed’, if such word is adequate here, and a true beauty.

The next bunch of numbers were older songs like "Tin Finger", "Kingdom of Ice" or "Your Russia", this one being the track that ended the first part of the night.  These last songs were older but that didn’t mean they played them differently.  Each and every one of them was played with astonishing conviction and power, giving no rest to the audience, as the 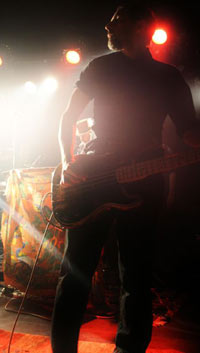 ambience was dark, suffocating and opaque.  One of the moments that deserved a special mention was when the band covered New Order’s "Truth" (a cover also included in The Threshingfloor), which kept on displaying great energy and force.  For the encores, Wovenhand had the special contribution of the Seven Seas Duet in a long medley that ended with "Winter Shaker", a tribal, obscure, brooding and mystic song that helped finishing the gig on a very high note.

So, as the writer of this was commenting to fellow members of Spanish website underscore.es, the 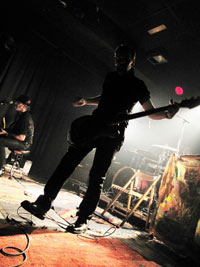 highlight of this gig was that, instead of offering a quiet, mystic, and acoustic set (overall, if one has in mind the latest record by Edwards and company), Wovenhand decided to approach it the other way, displaying electricity, decibels and some drops of distortion and noise.  True that it looked like the musicians seemed to forget their origins and walked a way that was swampy at times, dry at others, but in the end the result was a true expansive bomb of sound and imagination, which showed the band’s true skills.  And the audience appreciated that. 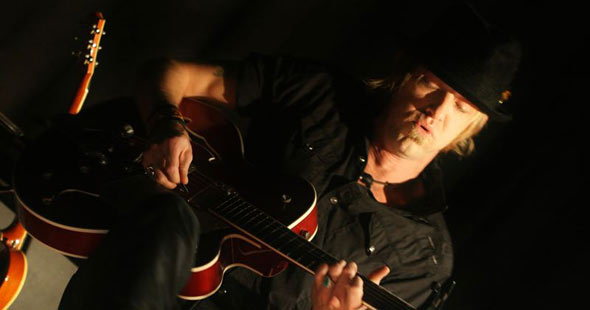