<img src="https://www.qromag.com/wp-content/uploads/2011/07/wyeoakcivilian.jpg" alt="Wye Oak : Civilian" /><span style="font-style: normal">Though it continues the progress made by 2009's excellent </span><i>The Knot</i>, with this record Wasner & Stack have crafted their... 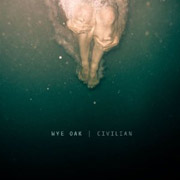 Live, singer-guitarist Jenn Wasner and drummer-keyboardist Andy Stack (who plays keys with the left hand while he drums with his right hand and his feet) barely look at each other on stage but you can feel a level of intimacy, a subconscious connection in Wye Oak.  There is a certain magnetism in Wasner presence on stage: her truly impressive guitar technique and her melancholic, sincere voice not only keep you entertained but at times really manage to get you totally lost to their magic.

Civilian is the third album of the band.  Though it continues the progress made by 2009’s excellent The Knot (QRO review), with this record Wasner & Stack have crafted their best work to date, proving to have learned a lot during their half-decade career.  This album has a more adult approach both musically and lyrically.  More than anything else they seemed to have learnt when to rein in their explosive talent, and when to let it all loose.  All their songs flow between sober restraint and loud explosion of power and emotion.  Even at the peak of the emotional, romantic explosion and desperation, they seem to find a way to tame the melancholy and the pain by normalizing it with mature self-consciousness and sobriety.

Often compared to Yo La Tengo (QRO live review) for the dreamy almost shoegazing sonics and to co-citizens Beach House (QRO live review), they have managed to create their own almost unique sound described by their label Merge Records as, “21st Century Folk.”

The album opens with an ambient chatter that leads into the droning drums and the layered, at times slightly distorted guitar melodies of “Two Small Deaths”, and carries on with the atmospheric “The Alter”, where the looped organ and smooth bass line perfectly synchronize with the tenderness of Wasner vocals.  But it’s the Sonic Youth (QRO live review)-esque “Holy Holy” that better expresses that sense of vulnerability, that dichotomy between tenderness & passion that make their music really worth listening.  There is something raw and sincere in both the music and the lyrics of this song.  In “Dog Eyes” a calm, happy melody is alternated with heavily distorted guitars, to once again suggest that duality.  “Civilian” has a classic crescendo structure, with an emotionally intense climax, both a confession to be human, selfish and superficial, and a request to be forgiven.  All seems to calm down with “Fish” and even more with “Plains” (hear some Meat Puppets – QRO live review – influences here).  “Hot As a Day” is definitely one of the best tracks of the album, where the duo express their music ability, Stack his sharp drumming accompanied by tambourine and piano melody, Wasner her graceful vocal range and guitar skills.  “We Are Wealth” is all about the warm, comforting Wasner vocals.  “Doubt” is a lullaby, a perfect album closer.

Where most bands seem to struggle with their third record, which in some cases can be a negative turning point in their career, Wye Oak yes have proved to have a certain consistency in what they do, but also to have fully grown up both musically and lyrically.  Civilian is one of the most sincere and somehow poetic records of 2011.