<img src="http://www.qromag.com/wp-content/uploads/2011/12/wyeoakdec8.jpg" alt="Wye Oak : Live" />The duo of Wye Oak were <span style="font-style: normal">able to fill in the enormous space of Toronto's Air Canada Centre with their... 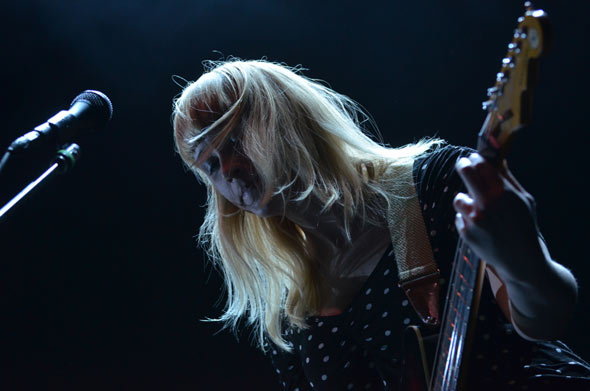 Click here for photos of Wye Oak at Webster Hall in New York, NY on May 7th, 2014 in the QRO Concert Photo Gallery

When one thinks of Baltimore, let’s be honest, musically, it doesn’t always paint the best picture (even before The Wire aired…).  However, if you’re impatient and/or can’t be bothered to read this article, musically, Wye Oak just might possibly be the best thing to ever come out of Baltimore – heck, Maryland.  It’s almost impossible to describe their sound to a first time listener or potential gig-goer, apart from to give the robust advice to bring a pair of earplugs as you are about to be hit by a wall of sound unlike any other – a pumping, minor melodic kick wave to blow your head off.  However, as terrifying as that may potentially sound, it’s as pleasurable as it could ever be.  This massive sound isn’t conjured up by a big band, as perhaps their roots should then again suggest, but only by Wye Oak’s two members – Jenn Wasner and Andy Stack.  The duo is a marvel to watch, with Stack providing drums and keyboards – yes, simultaneously – and Wasner providing opulent guitar and powerful vocals.

To listen to Wye Oak, one wouldn’t suspect that Wye Oak was a collective of two.  Their all-encompassing sound manages to captivate the ears with a solid exquisite sound, faultless in approach and providing a constant engagement for the ears.  There is nothing missing here.  Stack oozes skill by playing drums with his feet and right hand, whilst his left provides a keyboard accompaniment alongside programmes and loops.  It’s particularly noteworthy that this was at the Air Canada Centre in Toronto – a huge ice hockey arena where The Maple Leafs play (insert your own arboreal pun here) – where the band are able to fill in an enormous space with their colossal sound. 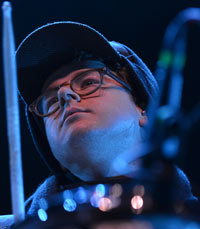 The band, opening on Thursday, December 8th for Brooklyn’s indie sweethearts The National (QRO spotlight on), began the night of three splendid performances with a bang, to be followed by Neko Case (QRO album review) and The National.  This was much to the crowd’s dismay, with Wye Oak receiving a warm reception and pleas not to leave the stage from their short slot.  A short but sweet set, Wye Oak comprising of material mainly from their 2011 release Civilian (QRO review).  Although Wye Oak may not be a household name yet, they seem to be slow burners – Civilian is their third label released album (all on North Carolina’s famed Merge Records), but has been making appearances of countless 2011 end of year lists, including QRO’s own (QRO Top Albums of 2011). 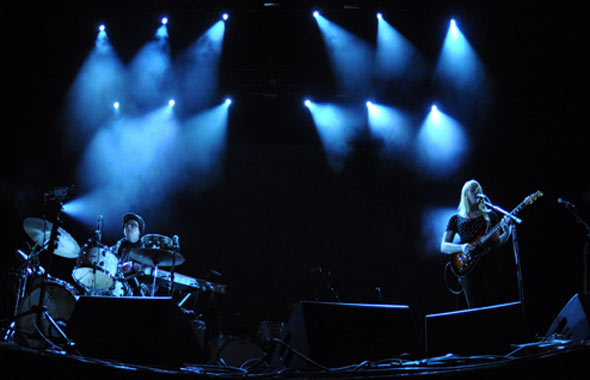 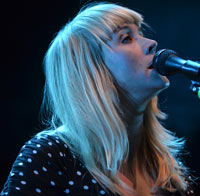 The beautiful yet almighty title track “Civilian” oozed power with a thunderous gallop of the drums laced with Wasner’s deep effortless vocal.  Wye Oak are a captivating band to watch, even for those without familiarity, as each track has something mystifyingly captivating, such as “Dog Eyes” or as track “Holy Holy” should exemplify the pounding guitars and perfected crescendos.  Wye Oak present no bloopers; they have perfected their art form to a tee.  What they have left is whet appetites gagging for more, and given time, perhaps it’ll be Wye Oak filling out ice hockey areas next time around. 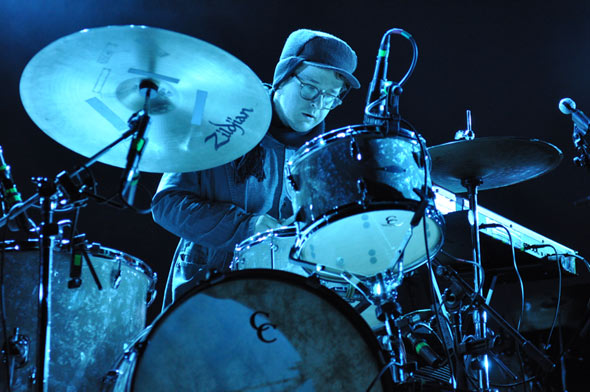