<img src="http://www.qromag.com/wp-content/uploads/2012/06/yachtmay8.jpg" alt="YACHT : Live" />While YACHT has evolved almost beyond recognition over the years, happily the central piece of the puzzle Jona Bechtolt remains as manic and... 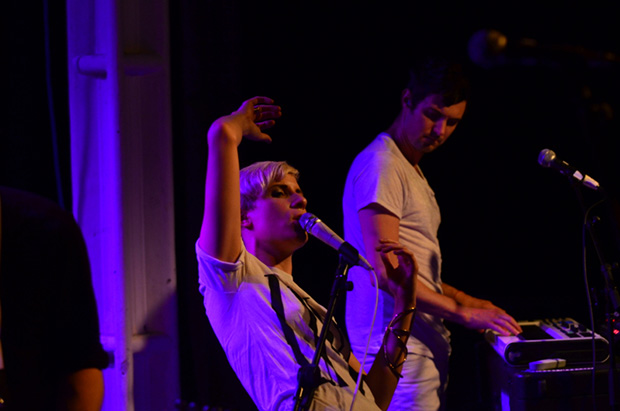 Click here for all of QRO’s coverage of YACHT in ‘Spotlight On : YACHT’ feature

YACHT’s first tour around London enlightened gig-goers to a frenetic, comical and technology-savvy munchkin – i.e. Portland artist and DJ Jona Bechtolt.  Since those early days, as more and more people bent their ears towards skewed electronic pop, the unit self has grown as well.  First with the permanent addition of fellow artist Claire L. Evans for their DFA label debut, See Mystery Lights (QRO review) and now, touring their latest full length Shangri-La (QRO review) at XOYO in London on May 8th, a full backing band – beautifully named The Straight Gaze – as well as Bechtolt’s trusty MacBook.

First though, support came from Eaux, an industrial, shoegaze inspired outfit featuring former members of Sian Alice Group.  There is a band that wears their influences on their sleeves: each song is a synth-laden ode to Cocteau Twins, battling it out with Radiohead’s eerier moments.  Sadly their efforts fell a little flat, and the songs came across as rather joyless and shoegaze-by-numbers.  While no doubt chosen as a foil to YACHT’s egregious disco beats, the choice felt wasted on the XOYO crowd who were largely unresponsive. 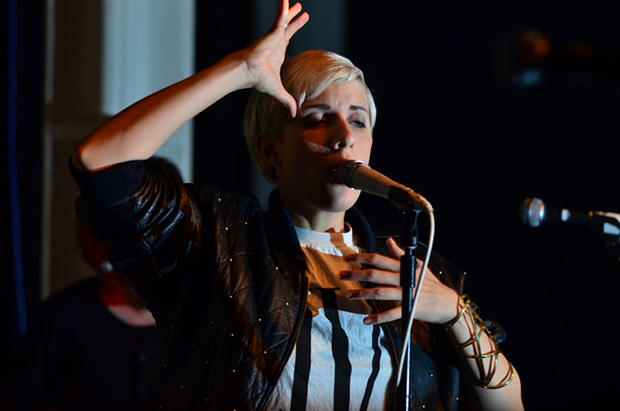 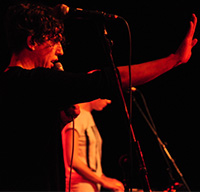 Of course, even as YACHT were fine tuning their instruments, their genial approach and innovation with technology came through, courtesy of a “We <3 the Internet” graphic backdrop, which told the crowd where to get the latest info and see the video for their single “Heave”.  Neat!

At first, from a long time fan of the band originating with watching Bechtolt dancing on stage with his laptop, seeing YACHT take to the stage and begin with Evans on vocals and live instruments, was almost like watching a different band altogether.  YACHT 3.0, if you will.  The backing band and live instruments brought out a rawness to Bechtolt’s compositions that not many 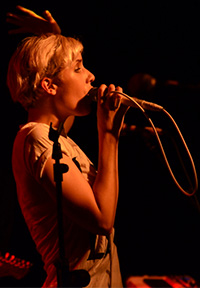 had noticed before, even songs from I Believe In You. Your Magic Is Real (QRO review) play out harder and stronger than they ever had when streaming out of Garage Band.

The gig was full of new material, from Shangri-La – their second DFA output.  It was plain to see just how comfortable the band have gotten in their iconic surroundings – their new material, especially with the live bent, was reminiscent of their label counterparts LCD Soundsystem (QRO live review) and The Rapture (QRO live review).  However the biggest rush of excitement of the evening greeted “Psychic City”, with the whole crowd singing in unison. 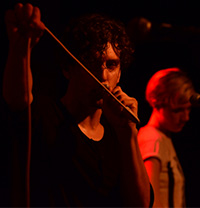 While YACHT has evolved almost beyond recognition over the years, happily the central piece of the YACHT puzzle – Bechtolt himself – remained as manic and irreverent as ever, indulging the crowd in star sign analysis, an explanation of the “Temporary Autonomous Zone” and a Q&A session where we learnt the reasons for male nipples (fetal development process, people!).  No one knows when the YACHT party will end, but with Bechtolt at the wheel, the journey will no doubt be tons of fun. 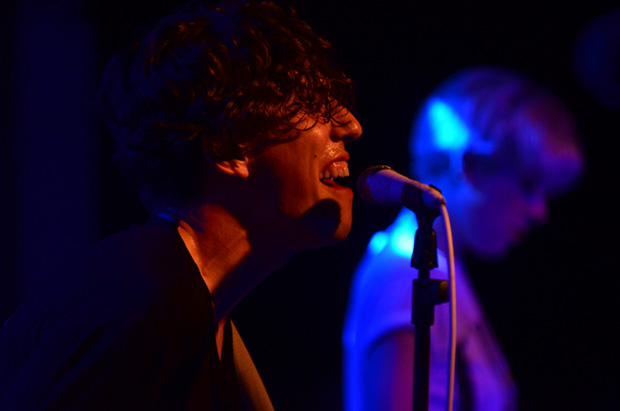