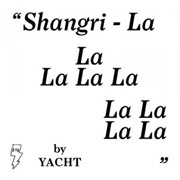 Electronic artist Jona Bechtolt used to be known as ‘one-half of The Blow’, but his I Believe In You. Your Magic Is Real (QRO review) put his solo project YACHT on the map in 2007.  Then girlfriend Claire L. Evans (QRO interview with both) joined him for 2009’s See Mystery Lights (QRO review).  And then they added a live band (QRO live review with band).  Now Bechtolt takes a relative backseat as Evans comes to the fore on Shangri-La.

Click here for photos of YACHT at Sanots Party House in New York, NY on July 28th, 2009 in the QRO Concert Photo Gallery

Click here for photos of YACHT at 2008 Fun Fun Fun Fest in Austin, TX in the QRO Concert Photo Gallery

Like all of the work of YACHT, Shangri-La is not tub-thumping electro-dance beats or twee indietronica – not even extreme experimental, though there are definitely elements of all three in YACHT’s unique, somewhat all-over-the-place blend.  The record opens with the speedy & funky “Utopia”, and closes with the brighter sing-a-long title track, and in between sees everything from cowbell beat (“I Walked Alone”) to Casio-simple (“Love In the Dark”), disco burner (“Beam Me Up”), and conversational ‘get ready to act’ anthem (“Beam Me Up”).  What’s most notable, in comparison to prior YACHT records, is that Evans takes up lead vocals nearly throughout Shangri-La.  It’s a move that largely works (though she’s not tough enough for the somewhat R&B diva of “Holy Roller”), especially as she has a way with lines – “I love you like a small town cop” (“Love In the Dark”), “If I can’t go to heaven / Let me go to L.A.” (“Shangri-La”), and pretty much the entirety of the awesomely conversational “One Step” (which is perhaps YACHT’s most infectious song since Magic‘s “See a Penny (Pick It Up)”).

YACHT is always going to be an idiosyncratic act, no matter who’s in the band, and that holds true with Shangri-La.  YACHT’s also always going to be an infectious band, and that holds true as well with Shangri-La.  It’s rare when a band can keep both of those up, getting neither bland, inaccessible, nor repetitive, but Bechtolt has built a sturdy ship.