Yeasayer has managed to be consistently original and indescribable.... 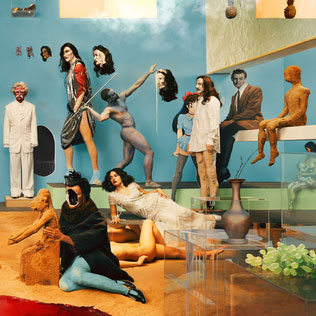 Ever since they began, Yeasayer have been a hard band to describe. Mixing electronics, tropical, psych, Indian, and even rock, they blend like a fusion restaurant of the near future, and have an equally as diverse audience. For their latest Amen & Goodbye, Yeasayer manage to up the psychedelic, Eastern, and Biblical all at once.

With songs like “Daughters of Cain”, “Dead Sea Scrolls”, and “Divine Simulacrum”, there is a definite Old Testament thread running through Amen, which also displays itself in harmonics that approach the hymnal. Yet it’s done through the Yeasayer filters, from the echoing techtronica of opener “Cain” to the post-modern “Dead Sea Scrolls”. “Half Asleep” employs sitar-like sounds, while “Child Prodigy” is actually a minute of harpsichord straight out of the eighteenth century. Oh, and the record isn’t all religion, such as the dark ode to science, “I Am Chemistry”, or all darkness, as the following “Silly Me” might be the closest Yeasayer have ever gotten to a catchy pop song.

Many acts in this day & age explore the experimental, from the past to the future, but often it’s either watered-down or inaccessible. And even those that can pull it off either work once and never again, or repeat themselves. Yeasayer has managed to be consistently original and indescribable.