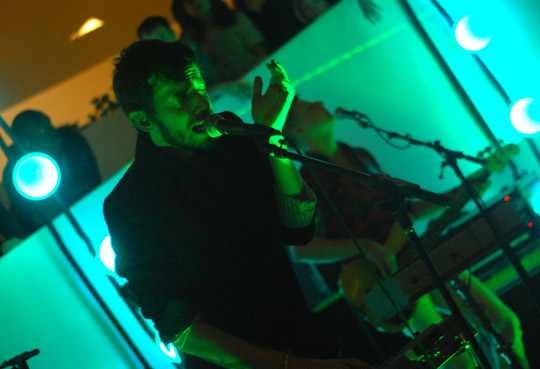 While the Guggenheim Museum (QRO venue review) on Manhattan’s Upper West Side displays works going back to the Impressionist Period, and opened over seventy years ago, there’s always been a distinctly ‘modern’ feel to it, from Frank Lloyd Wright’s iconic architectural design to the pieces inside.  Currently displaying the works of Wassily Kandinsky, considered the first to paint modern abstract, it’s also home to the new ‘It Came From Brooklyn’ monthly series of concerts, featuring bands from across the East River who are making it/have made it.  The first show (QRO review) was a kind of ‘test-run’ with the new, classier Walkmen, while the second (QRO review) was the first-ever performance by Julian Plenti, a.k.a. Paul Banks of Interpol (QRO album review).  For the third, on All Hollow’s Eve Eve, the Guggenheim went even further into the future with Yeasayer, who were previewing material from next year’s Odd Blood. 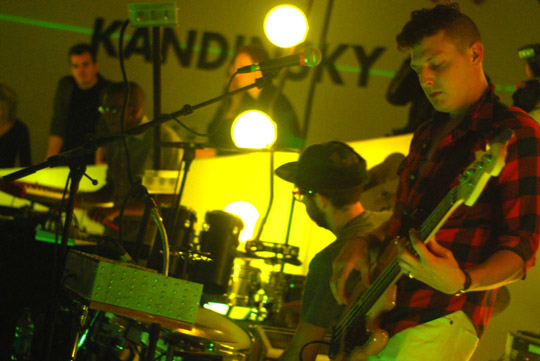 Not that Yeasayer isn’t futuristic enough already.  The band broke out in 2007 thanks to debut full-length All Hour Cymbals (QRO review), which had a unique mixture of the spooky, near-supernatural, industrial, tribal, electronic and more.  Songs like "2080" felt like they really were from the near-future, where globalization brings the cultures of the world together, but individualism keeps the melting pot more of a tossed salad, different, distinct parts from different, distinct places in each piece.  The band even kind of looks the part, in its different races (in today’s still-too-lily-white indie culture – though all still male) and styles of appearance. 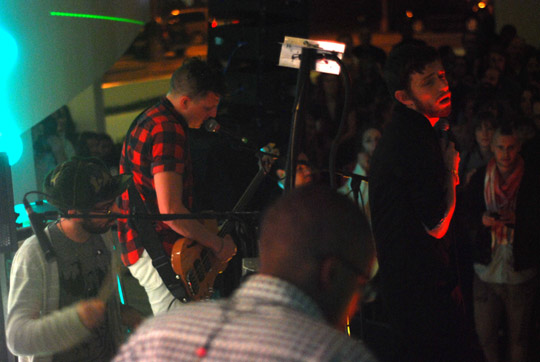 But they still face an age-old fear: the sophomore slump.  Any breakthrough performance that can be segmented into one, single, debut piece of work, whether album, movie, TV season, year in the majors, etc., always brings about the question, "Can he/she/they/it follow it up in their second performance?"  The more accomplished the first performance, the more pressure is put on the second (and the more people are, perhaps gleefully, looking for the performer to fail), whether you’re in the first, twenty-first, or thirty-first century. 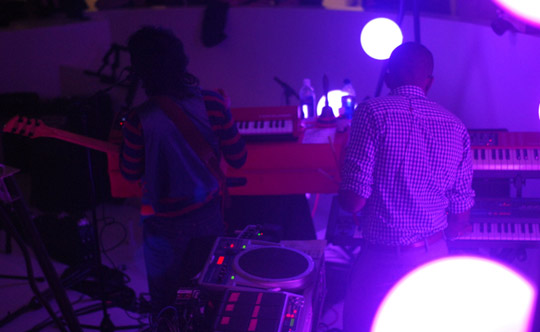 For their performance at the Guggenheim, Yeasayer approached this all head-on.  Most notable, certainly initially, was there light show.  The stage floor had a few large globes, maybe three feet high/wide, which changed colors like some mix of Japanese lantern and jellyfish; further, smaller globes were arrayed above the crowd and behind the band.  While it wasn’t the first time the group had used these globes (see their set up at Hudson River Park in the summer – QRO photos), what was very new were the pseudo-3D glasses that were handed out.  As the band later explained, they weren’t really 3D, but meant to make ones red and green vision shift and separate, over time.  Unfortunately, they 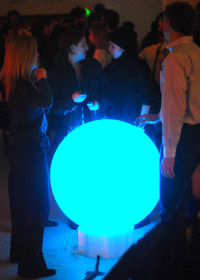 also joked that that time span it took, about an hour or so, was longer than they were going to be playing.  And it was rather hard to keep the glasses on non-stop, throughout the entire performance: it wasn’t just if you were getting a drink or going to the bathroom, but if you wanted to go up the Guggenheim’s ramp, security would stop you – not even if you wanted to watch the band from behind, on the initial, painting-less ramp (prohibiting the flimsy glasses like they prohibit drinks there – which left the security people there holding a pile of glasses 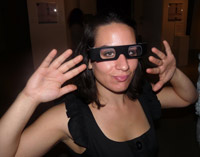 in their hands…).  While it may not have created the light show Yeasayer (or the Guggenheim) wanted, the globes of light, as they were, were interesting enough (unlike, say, watching a 3D movie without 3D glasses…). 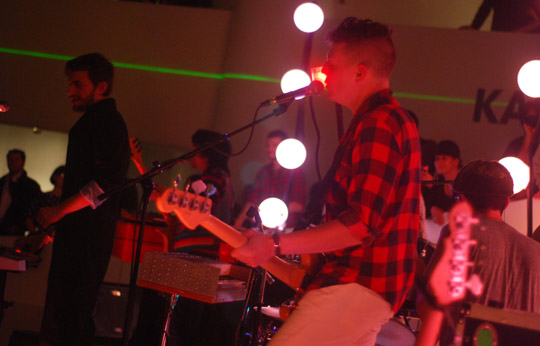 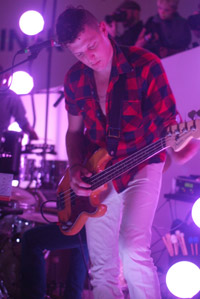 But the obviously more significant new piece of the puzzle was Odd Blood.  While it doesn’t come out until February, few indie releases are put out in January, December, or even November, thanks to heightened competition from the mainstream music world, so the album is more than likely in the can already – they’ve even released the track listing.  And the first half of the show was the first half of Odd Blood, in that order, with only one ‘old’ piece inserted – "Tightrope", their most recent recorded release, part of the Dark Was the Night compilation (QRO review).  While record/set opener "The Children" had 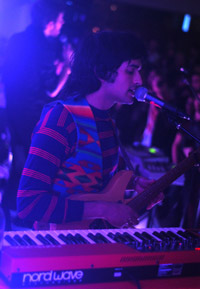 a clanging haunt that was too much, too soon, "Tightrope" followed it up nicely – and even nicer was first Blood single, "Ambling Alp".  Having just been released for free download on their website (link), it was the one new song people could be familiar with, and many were, attested to by the cheer that rose up when guitarist/keyboardist Anand Wilder first rung his bell at the start of the song.  It helps that it’s also a great song, an epic tribal ring that feels a worthy next step in the evolution from All Hour‘s top tracks. 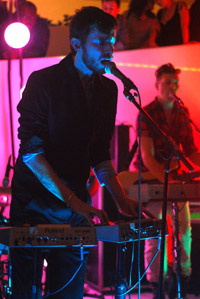 The Odd Blood pieces which followed pretty much kept up that quality, "Madder Red" bigger in both its haunt & harmony, "I Remember" an interesting change in twinkling keys like Fantasia or Dan Deacon (QRO live review), and "O.N.E." the most tribal piece of the night, featuring lead vocals from Wilder.  But from there, Yeasayer went into All Hour Cymbals for the rest of the night, with singer/keyboardist Chris Keating even meekishly apologizing/thanking the crowd for letting the band play the new stuff.  While the initial Cymbals pieces done, "Many Waves" and "Red Cave", weren’t too stand out (perhaps lined up that way on the set list – QRO photo – to make the immediately preceding new material seem better?…), Yeasayer ended the night with the album’s best three songs, "Wait For the Summer", "2080", and "Sunrise".

Yeasayer playing "Wait For the Summer" live at Guggenheim in New York, NY on October 30th, 2009:

It’s not easy to preview new material, especially if you’re following up a breakthrough debut.  People got into you because of your prior work, want you to play that, and it’s not like you’ve got some wide range of previous material with which to leaven in the new/mix-up the old.  That’s true in all arts, including the modern, including music.  But the Guggenheim has balanced its ‘classics’ with the new for going on seventy years now – not a bad place for Yeasayer to try. 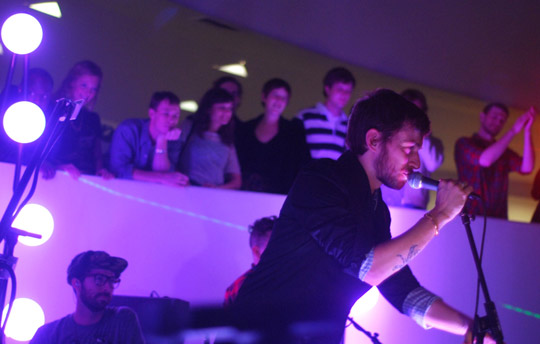