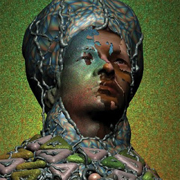 After a solid debut with All Hour Cymbals (QRO album review) in 2007, Yeasayer caught the attention of the press, the public and a few bluebloods of the industry.  MGMT (QRO live review) invited them on tour, the big international fests came calling, and Yeasayer members even backed up Beck on his Modern Guilt (QRO review) tour.  Quite a whirlwind of activity for a band with only eleven songs officially on the books.  Fast-forward past all the hullabaloo to the present day, and the band finds themselves faced with the same challenge every artist faces: do it again.  On their triumphant sophomore album Odd Blood, Yeasayer ‘do it again’ and more.

The band from Brooklyn brings a lot of their road experience back into the studio, combining some of the best aspects of their touring partners with Yeasayer’s signature rhythms.  The monumental, maximalist weirdness of the orchestral synth intro to "I Remember" is straight from the MGMT playbook.  The beeping, buzzing, bubbling melody lifts the listener aloft on the wing of an electronic feather pillow.  "The Children" is a deliciously bizarre marriage of slo-disco and Beck’s ‘satan’ voice from "Motherfucker".  In fact, Beck’s playful vocal sensibility is a constant companion throughout Odd Blood.  Yeasayer isn’t afraid to tune their voices up or down a few octaves to grab your attention.  But whereas nobody could quite take Beck’s hammy Midnite Vulture falsettos seriously, Yeasayer is able to imbue their playful vocal preening with a Morrissey (QRO live review)-like sense of purpose.  No small feat.

Aside from these immediate influences, it is the strain of ‘world beat’ running through Yeasayer’s music that sets their sound apart from a lot of other bands out today.  ‘World beat’ is not usually a label with which indie rock bands want to be associated.  Why?  Well, it’s just too easy to do that sort of music badly.  Add a hard-to-pronounce instrument here, throw in some Tyrolean throat singing there, and soon enough you sound like a cheap Peter Gabriel knockoff.  Acts that have accomplished this feat in recent memory, like Björk and Arcade Fire (QRO live review), generally have more musical chops than your average band.  So it’s no small statement to say that Yeasayer successfully incorporates world rhythms in songs like "Madder Red" and "ONE".

The song "Ambling Alp" was the single picked out for the promotion of Odd Blood.  Not undeservedly; it’s a catchy tune, alternating between Depeche Mode verses and afro-pop refrains, using all the quirky electronic tricks in Yeasayer’s repertoire.  Yet the band really isn’t a singles factory.  Their strength is fleshing out musical landscapes that their influences merely sketched out in brief detail – and in this sense they surpass their influences.  You may not find any song on this album to put on your ‘Best of the Decade’ list, but when Yeasayer hits that mix of electro-psych-world-rock just right, you’ll be glad they went with substance over sugar.