Yo La Tengo – Live at SummerStage 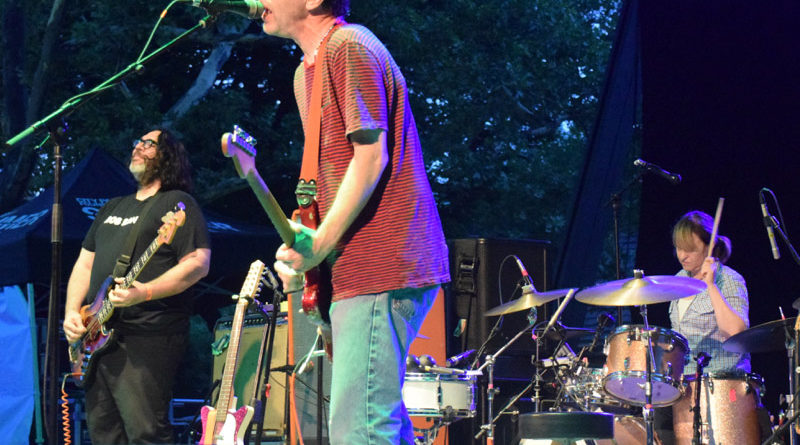 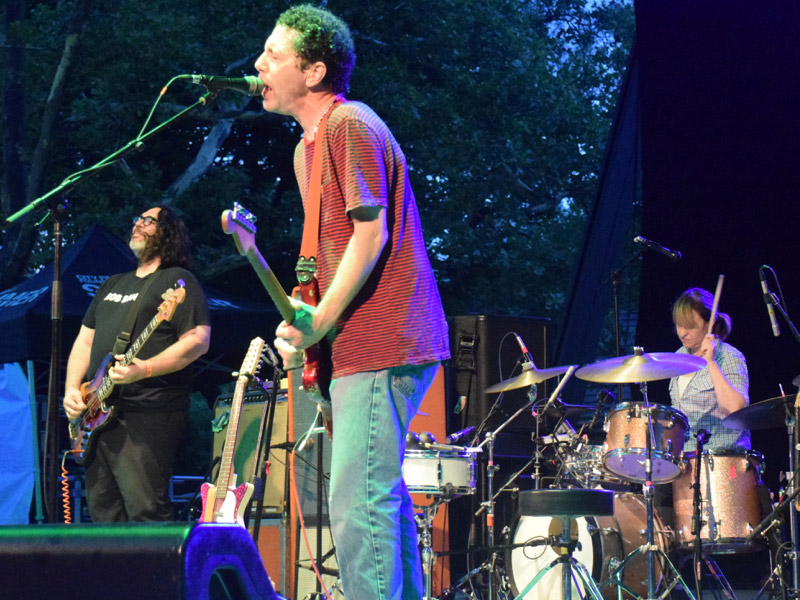 Photos of Yo La Tengo at 2016 Pickathon in Happy Valley, OR

Photos of Yo La Tengo at 2013 Le Guess Who? Festival in Utrecht, Netherlands

Photos of Yo La Tengo at 2013 FYF Fest in Los Angeles, CA

Photos of Yo La Tengo at Prospect Park Bandshell in Brooklyn, NY on July 11th, 2013

Photos of Yo La Tengo at KeySpan Park on Coney Island in Brooklyn, NY on July 13th, 2009

Photos of Yo La Tengo at 2009 Pitchfork Music Festival in Chicago, IL

There are few concert spaces in New York City as reliable as Central Park SummerStage (QRO venue review). For many years now, the space just west of East 69th Street has had big concerts, both ticketed and free, stretching from May into September (before winter comes to Westeros NYC).

There are few bands in indie-rock as reliable as Yo La Tengo. For decades now, the trio of drummer/singer Georgia Hubley, guitarist/singer Ira Kaplan, and bassist/singer James McNew have been delivering exquisite music that’s always a critical fave, if never mass appeal.

The free shows at SummerStage tilt towards the city-highbrow, and Yo La Tengo have a certain classy nature to them, being such veterans and such every music critic’s favorite band. But it was still a hot and sweaty night, with the crowd not as old as one might have expected. Yes, there were Upper East Side elders, but also Brooklyn hipster kids, and a serious line for the free samples of Sierra Nevada that ran out as Yo La Tengo’s set began. 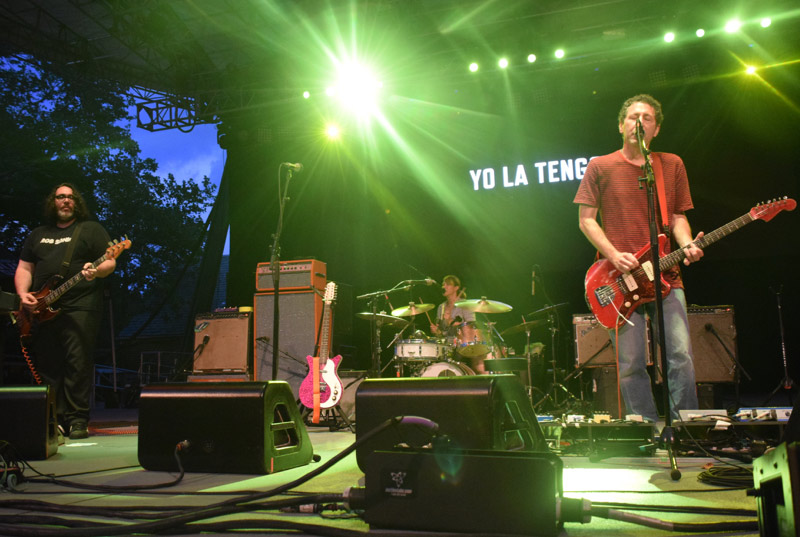 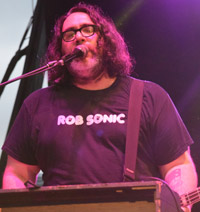 Yo La Tengo’s most recent record was 2015’s Stuff Like That There (QRO review) with original guitarist Dave Schramm, but perhaps as he wasn’t there, nothing from that mixture of covers, originals, and reworkings were played. However, the evening still began with a cover, from a group that is, among other things, a well-honed covers machine (with multiple covers records, including Stuff, Yo La Tengo Is Murdering the Classics, and Fakebook), Ace Frehley’s “Back In the New York Groove”. Sung by McNew (who only rarely sings lead), it was an upbeat way to start the show. 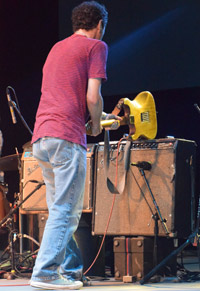 But this is Yo La Tengo, who thought nothing of delivering a mammoth jam for the next number. “Pass the Hatchet, I Think I’m Goodkind” from 2006’s I Am Not Afraid of You and I Will Beat Your Ass is a relative ‘hit’ (of course Yo La Tengo would have a long-named single from a long-named record…), but at SummerStage the band extended it with a jam from Kaplan. The jam included Kaplan playing to amp for distortion, taking his guitar off, leaving it on the amp while still on and humming, and picking up another guitar (the first one was eventually removed). Meanwhile, Hubley and McNew soldiered on, holding it down, as a good rhythm section should. 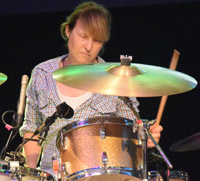 Admittedly, there were a number of jams on the evening, perhaps too many (photographers in the pit during “Hatchet” barely knew what to do with themselves, especially as it was only the second of the first three songs that they were shooting). Penultimate “Ohm” (from 2013’s Fade – QRO review) saw Kaplan go into the crowd to retrieve a guitar during all the time he had, while the subsequent “I Heard You Looking”, performed with openers Ultimate Painting (QRO photos), was an epic close. But there were also sweet moments like I Am Not Afraid’s “Black Flowers”, “All Your Secrets” from 2009’s Popular Songs (QRO review), and “Before We Run” from Fade. 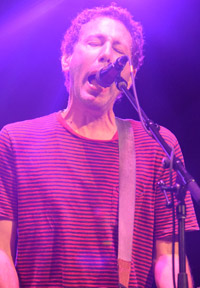 And there was one more cover for the evening. After the encore return of Afraid’s “I Feel Like Going Home”, Kaplan welcomed a special guest – his mom! The younger Kaplan explained that the band had once yearly played eight shows during the nights of Hanukah at their hometown venue of Maxwell’s (QRO venue review) in Hoboken, New Jersey, only Maxwell’s is no more, but this December they’ll be bringing the run to Manhattan’s Bowery Ballroom (QRO venue review), 12th to 19th. Kaplan joked that his mother had it in her rider to only work on Jewish holidays, but was making an exception to give the crowd a taste of the holiday shows, as she joined Yo La Tengo for their cover of Anita Bryant’s “My Little Corner of the World” (from 1997’s I Can Hear the Heart Beating As One). 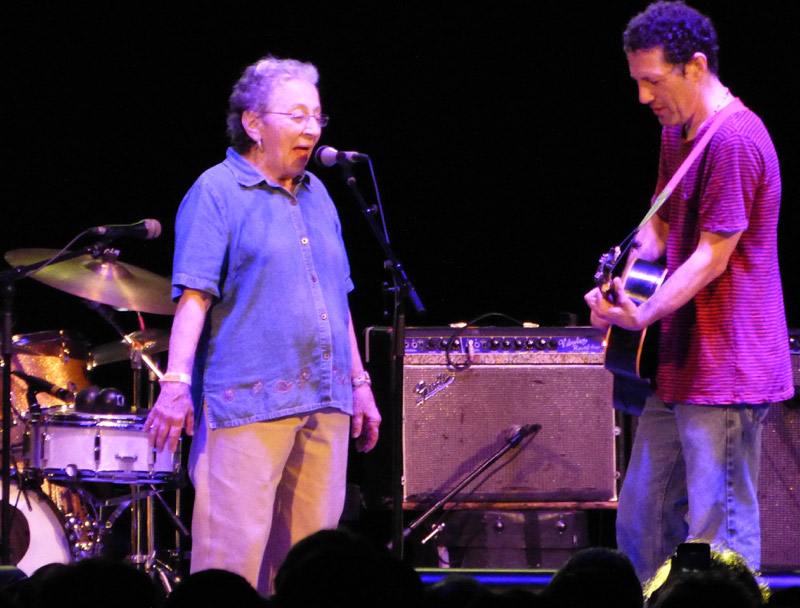 Photos of Yo La Tengo at McCarren Park Pool in Brooklyn, NY on August 28th, 2008

Kaplan did have the band’s longevity on mind, remarking that it was twenty-six years since McNew joined the band, and talked about other long-ago shows, such as seeing Sha Na Na at Central Park’s nearby Wollman Rink (McNew, on the other hand, joked about all the work they’d done on the video playing behind them – it was just their name up there). There are few acts that have stayed together, no break-ups & reunions, than Yo La Tengo (especially when one considers that two-thirds of them – Hubley & Kaplan – are married, usually a recipe for a band’s dissolution…). And Central Park might be the most famous park in America, if not the world. It was really nice to see the two of them come together. 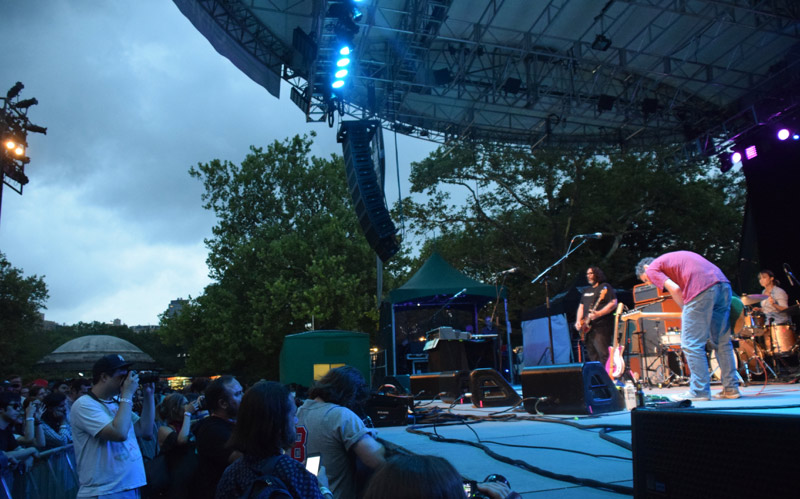