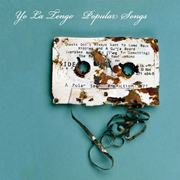 Hoboken’s Yo La Tengo have been a favorite of critics for a long time, and not just because singer/guitarist Ira Kaplan used to be a rock critic himself.  There’s the band’s longevity, now past twenty years of Kaplan & wife/singer/drummer Georgia Hubley (bassist James McNew has ‘only’ been in the trio since 1992…).  There’s their wide-ranging musical knowledge, including being able to play more covers than you can shake a stick at.  There’s even their Hanukkah shows, all eight nights at their hometown’s Maxwell’s (QRO venue review).  But really it’s their music, able to span many different styles & genres while being great at all of them.  That all keeps apace with their latest, Popular Songs.

The title was probably ironic, given that Yo La Tengo have always found much more success with critics than in mainstream appeal, but Popular is accessible & enjoyable enough to garner much wider notice – while still being impressively accomplished & varied.  It’s that last aspect, Popular’s variety, which first really comes to notice, as Yo La Tengo are able to play swishing atmos-psych (opener “Here To Fall”), drone-tronica (“By Two’s”), bright, relaxed rock (“Nothing To Hide”), and even a smooth, straight-faced smile with a jazz-funk backbeat (“Periodically Triple or Double”) – and do it all so very well.  By the time of middle track “If It’s True”, even the most laymen of listeners is hooked.

Click here for photos of Yo La Tengo at the last McCarren Park Pool Party in Brooklyn, NY on August 28th, 2008 in the QRO Concert Photo Gallery

The other half of the tracks on Popular follow in sad, soft beauty (“I’m On My Way”, “When It’s Dark”, and “All Your Secrets”) – enchanting, though after the variety that came before, feel a little similar.  But then Yo La Tengo blow Popular Songs up in its three final songs, “More Stars Than There Are In Heaven”, “The Fireside”, & “And the Glitter Is Gone”.  Those three comprise over thirty percent of Popular’s running time, at near ten minutes, over eleven minutes, and near sixteen minutes in length, respectively.  “More Stars” embraces the earlier soft, sad elements even more, and moves further from the rhythmic wordplay from the record’s start, into a growing, carrying walk away – and it’s the most verbal of the three, with “Fireside” a stripped mixture of occasional strumming & reverberations, and “Glitter” just a straight-out instrumental jam session.

But it’s not like Yo La Tengo can’t pull all of that off, either, with impressive skill and grace, never falling into self-indulgent ‘look at how good I am’ or off-putting ‘look at what I can do’.  If the variety on Popular Songs can be frustrating, it’s only because, after almost every song, one would be happy with a whole album of that, but Yo La Tengo instead go in another direction – and succeed once more, starting the whole process over again.

Often times, critically-acclaimed bands can seem cursed to remain ‘just’ critically-acclaimed, never breaking into wider appeal – but that’s often because they haven’t found a way to make interesting music accessible.  Not so with Yo La Tengo – and Popular Songs has so far been their most commercially successful record to-date…