You Can Be A Wesley – “Talking Science” and “Old In Florida”

We were recently graced with two tracks from Boston’s You Can Be A Wesley. This is a blunt transcript of what happened when QRO’s Christy Hannon and Mike Gutierrez got...

We were recently graced with two tracks from Boston’s You Can Be A Wesley. This is a blunt transcript of what happened when QRO’s Christy Hannon and Mike Gutierrez got their paws on it. She’s a little bit Goth, he’s a little bit Chillwave: together, they’re totally totally awesome-sauce.

Christy: I’m thinking in a sort of stream of consciousness these mp3’s are giving me visions of an early 2000’s San Diego scene, Mates of State, maybe Arcade Fire Funeral-era without the orchestration. The vocals are a cross of Régine Chassagne and Joanna Newsom with some interesting melodic lines.  The backing male vocals add some depth and interest to the straightforward rock ditties. I’d like to see how this band is live. It sounds like could be a pretty fun show. 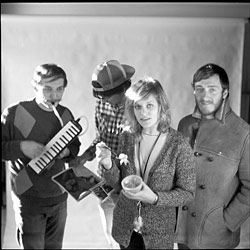 Mike: I like those comparisons. I’d have Joanna Newsom’s babies if it were biologically possible and she didn’t have that restraining order on me. And the male vocals are a nice touch. I reviewed You Can Be A Wesley ‘s last record Heard Like Us , and it was great vocally, Saara Untracht-Oakner has a real sweet vocal gift. But you missed that yin-yang male/female thing that "Old In Florida" plays up. By the way, what the hell is the early 2000’s San Diego scene? I was in San Diego in the early 2000s, I don’t remember a thing. Granted I was drinking heavily, but still…

Christy: Dude, male/female vocals, did you not read my Mates of State reference? Plus I have a vested interest in the Floridian Old Folk as that’s where I am. The guitar/bass vibe totally appeals to me in a Touch & Go/San Diego band sort of way, calling it how I see it. Overall I like the straight forward punch of poppy rock.

Mike: I don’t read anything you write, you know that. But point taken. And I hesitate to call You Can Be A Wesley ‘poppy rock’. They rate too highly on my badass meter. Their red hot single "Creatures" seduces first, then socks you in the stomach with this outrageous 51 gun sonic salute. If I could cop that sort of attitude I would have bedded Joanna long ago.

Christy: *wince* I’d only give an approval to this genetic exchange if you named the offspring Gruesome and let it keep the mother’s surname. Tasteful, stylistic and simple. Like the mp3 selection before us.

Mike: You sold me, now sell Joanna. In the meantime, enjoy some new You Can Be A Wesley , y’all.

{audio}/images/blog/Old%20In%20Florida.mp3{/audio}
Tags
You Can Be A Wesley
Categories
Tracks
OLDER ARTICLE