When Young Galaxy released their self-titled debut full-length in 2007, they seemed very much out of the grand mold of such ‘Canadian Invasion’ acts as Stars (QRO live review)... 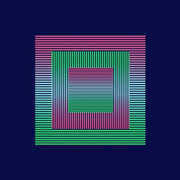 When Young Galaxy released their self-titled debut full-length in 2007, they seemed very much out of the grand mold of such ‘Canadian Invasion’ acts as Stars (QRO live review) and Broken Social Scene (QRO spotlight on) – Young Galaxy (QRO review) was even released on BSS’s label Arts & Crafts.  However, from then on, the band has been evolving (including changing labels) in the even newer, more modern direction of electro, coming to maturation with Ultramarine.

Young Galaxy have certainly not abandoned grandeur on Ultramarine, as witnessed in opener “Pretty Boy” – it’s just that they often marry it to dancetronic sounds.  The combo is most in force and most impressive on “Pretty Boy” and middle track “Hard To Tell”, the former an evocative up-reach & out-reach, the latter involving twinkle and tech.  And the album closes by awakening into neo-brightness on “Sleepwalk With Me”.

There are pieces where the group goes more for straight electronic, for more mixed results.  The nautical tropicalia of “Fall For You” actually works pretty well, and is something both enjoyable and interesting, but the airy evening disco of such pieces as the following “New Summer” feels kind of common these days.

Young Galaxy came in too late to revolutionize the Canadian Invasion, but have been making up time on today’s electro-wave (thank god they didn’t go garage – they’re far too skilled for that), and even as they’ve evolved out of where they started, they just might be onto something new.