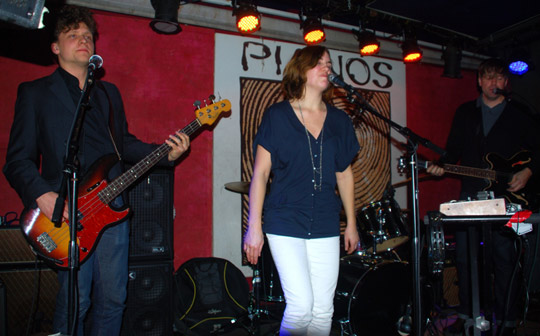 In 2007, singer/guitarist Stephen Ramsay (formerly of Stars – QRO live review) and singer/keyboardist Catherine McCandless released their self-titled debut LP (QRO review) as Young Galaxy, and seemed poised to start a second wave of ‘Canadian Invasion’ acts – but then were swamped by the return of the first wave, from Arcade Fire (QRO live review) to Broken Social Scene (QRO spotlight on) to Stars, and seemingly disappeared.  Now, almost two years later, Ramsay & McCandless are finally coming back with the new Invisible Republic, and a (mostly) new backing band.  On their way to South-by-Southwest (QRO festival preview), they stopped off at Piano’s (QRO venue review) in New York, NY on Wednesday, March 4th to preview their new material.

On Young Galaxy, Ramsay & McCandless trafficked in not just the grand romance of Stars, but also the epic expanse of countrymen/labelmates Broken Social Scene, but live, they would take that to a crashing call to arms.  Some of that was lost at Piano’s, whether from the new material, the band’s nerves at playing the new material, the crowd’s unfamiliarity with the new material, or the somewhat older crowd’s general reticence to get involved.  Instead, the preview show became a real introduction to Invisible Republic, played a bit slower, starting with the swaying new opener “Light Years”.  And while the new “Destroyer” did feel reminiscent of Young Galaxy’s “The Alchemy Between Us” in its own slow expanse, the band also added in some choral and even psychedelic elements. 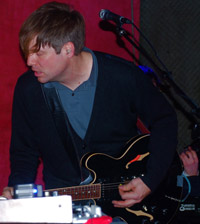 From there, Young Galaxy only mixed things up more and more, displaying really different sides.  McCandless-led “Firestruck” stood out as a real torch song, with instrumental explosions, which allowed her accomplished voice to stand out more than it ever did before.  “The Buzz In My Flesh” combined the band’s expansive instrumentation with almost bossanova diva vocals from McCandless, linked by a strong rhythm.  Young Galaxy wasn’t completely ignored, as two of its strongest tracks were included, “Outside the City” coming second in the set, and “Swing Your Heartache” coming second-to-last (though no “Wailing Wall”, unfortunately), but the focus was on the new in the psychedelica-meets-melody “Queen Drum” and disco-funk + expanse-jam closer, “Long Live the Fallen World”. 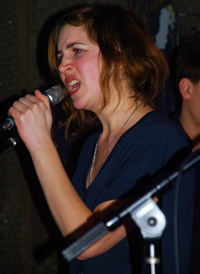 Preview shows are always tricky (and there are a bunch of them in New York in the run-up to SXSW, like the same night’s show just a few hours earlier & a few blocks away at Mercury Lounge, by Manchester Orchestra – QRO review), but Ramsay, in particular, was in a good mood, such as joking that “In Canada, the tradition is to go pant-less during the set when a band from another country is playing”, hoping at least one person would ‘Porky Pig it’.  He said that Young Republic would “be out in the next five years”, with which McCandless had to correct him that it was “the next five months”, or in announcing that they were going to be playing “The Buzz In My Flesh” only to be corrected again by McCandless, that it was “Firestruck” that was up next on the set list (QRO photo – maybe that line about taking too much peyote and “challenging the 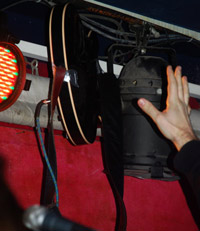 While Young Galaxy didn’t repeat the epic crash-finishes of their 2007 shows – missing touring guitarist Stephen Durand and touring drummer Liam O’Neill (now with labelmates/fellow Montrealers The Stills – QRO spotlight on) did stand out here – instead the full line-up got wild in a different way, turning the end of “Fallen” into a noise-rock jam explosion, including Ramsay sticking his guitar into the ceiling of Piano’s and running into the crowd to high-five fans (who were a little taken aback, and slow to reciprocate).  And Invisible Republic might show the same relation to Young Galaxy: not a retread, but not an abandonment, either – an evolution. 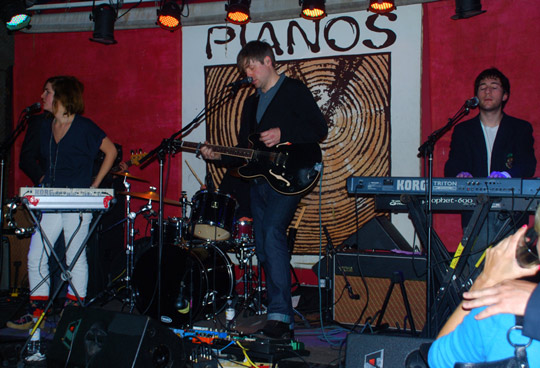