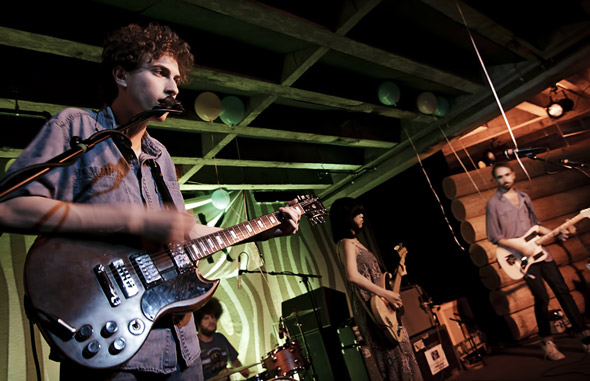 Descending the staircase of the Doug Fir Lounge in Portland, OR on Sunday, July 24th, enveloped in near total darkness and beset by liquid bass tones of unreal sustain, it was hard to identify this venue as the one whose casual cheeriness generally calls to mind the Christmas carol sing-a-longs or summer camp open mics of a near-forgotten youth. 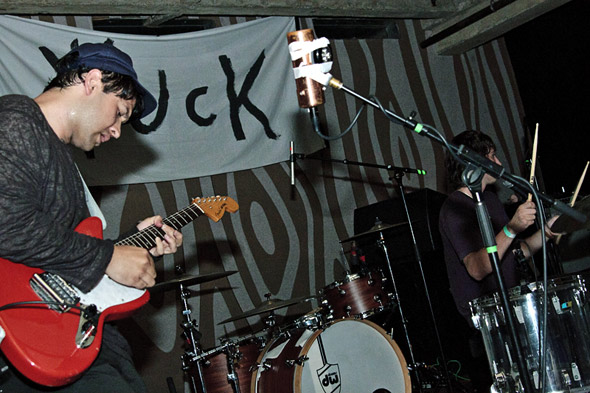 The three members Unknown Mortal Orchestra, their sneakers lit by stomp boxes and as-seen-on-TV touch lamps, all crowded the lip of the stage, a formidable frontline effortlessly dominating the atmosphere of the room.

Whether ripping through energetic solos or providing queasy tone-bending atmosphere, guitarist Ruban Nielson rarely let his foot lift from his Holy Grail reverb pedal.  The silver, cylindrical microphone he sang into seemed to split his ragged falsetto into two registers, lending his voice an airy unearthliness.  Between their space-filling reverb boxes and their tactful way of utilizing space itself, the band engineered a live sound that captured the best aspects of a Dave Fridmann production. 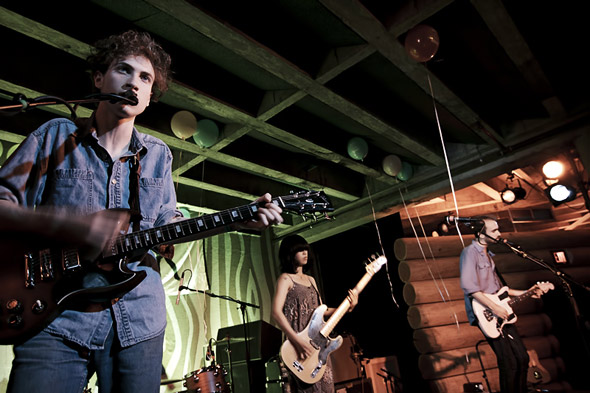 Click here for photos of Yuck at 2014 Live at Leeds in Leeds, U.K. in the QRO Concert Photo Gallery

Click here for photos of Yuck at 2012 All Tomorrow’s Parties: I’ll Be Your Mirror at Alexandra Palace in London, U.K. in the QRO Concert Photo Gallery

Click here for photos of Yuck at 2011 Constellations Festival in Leeds, U.K. in the QRO Concert Photo Gallery

At the conclusion of Unknown Mortal Orchestra’s set, the Wipers’ Over the Edge began to play over the PA, a choice perhaps inspired by the inverted peace sign incorporated into the typography of Yuck’s rear-stage banner.  As the house lights dimmed a few minutes later, that music was replaced by a piece of thumping electronica with a memory-nagging melody.  Clearly this was intended as Yuck’s intro music but one has to cross one’s fingers and hope it was not intended to foreshadow a future direction for the band.

The band members appeared on stage without any fanfare, dispersing balloons around the stage in honor of bassist Mariko Doi’s birthday.  One balloon was tied to her microphone stand to bob above her head the rest of the evening.

As might be expected from a group with a short gestation period and only one full-length release to their name, Yuck stuck mostly to material familiar from their self-titled album, going so far as to mostly retain the record’s running order. 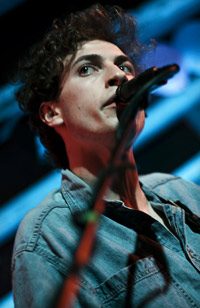 As the songs were ticked off, one couldn’t help but notice that the band was detrimentally faithful to the performances captured on Yuck.  The album’s more successful songs – “Get Away”, “Holing Out” – felt reigned-in and overly cautious in the live setting.  Likewise, Yuck‘s more underwhelming moments – “Rubber,” “Stutter” – retained in their live versions the tepid tastefulness captured on record.

After having experienced the nimble energy and occasionally scorching fretwork of Unknown Mortal Orchestra, it’s surprising that Yuck hasn’t taken a page from the opener’s book and incorporated some of that looseness into their own approach.  Considering how much space in Yuck songs is devoted to lead guitar passages, guitarist Max Bloom takes surprisingly little advantage of the spotlight.  Forgoing impassioned improvisation, Bloom favors tidy, precise guitar figures similar in style to those heard from Smith Western’s Max Kakacek.  With his Fender guitar taped up in the Lee Ranaldo style, it was impossible not to hope that Bloom would be inspired to venture a little further into the unknown.  Perhaps at a future gig someone will sneak onstage to replace his slide with a screwdriver. 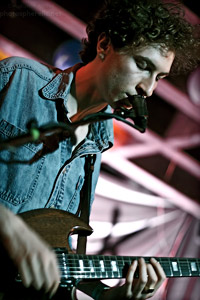 The experience of hearing Yuck as well as experiencing the band’s live performance has made the U.S. music press’ story about the band’s stylistic roots seem an ill-fitting narrative.  Although Yuck does hark back to a ‘90s sound that could be said to have originated in the 1980s U.S. underground, it links particularly to an era where those sounds had gone global, or were at least crossing oceans – one thinks of Alan Moulder-mixed albums by My Bloody Valentine and Smashing Pumpkins (QRO live review) or Aussie-pop-informed releases by the Lemonheads (QRO live review).  If anything of Pavement’s (QRO live review) is evoked, it would have to be 1999’s Nigel Godrich-produced Terror Twilight.

When the band finished their set, that electro music hit the speakers again.  Considering the group’s embrace of stricture and polish, it’s no surprise that the drum machine and sequencer are beckoning.  Here’s hoping they can resist that temptation.