Yukon Blonde go back and forth between magnificently hype-worthy and desperately repetitive on their first full length. ... 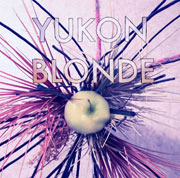 Classic rock is a genre very much at the heart of Yukon Blonde, the debut album from the Vancouver band of the same name.  Though it may be hard to recognize at times under a new age haze of vocals and distortion, the shredding guitar riffs, mellow bass lines, and distinct percussion are all reminiscent of a time long since passed.  Having made a dozen or so ‘Who To Watch In 2010’ lists despite their relative obscurity and nonexistent discography, Yukon Blonde go back and forth between magnificently hype-worthy and desperately repetitive on their first full length.

Click here for photos of Yukon Blonde at Mercury Lounge in New York, NY on March 28th, 2015 in the QRO Concert Photo Gallery

Click here for photos of Yukon Blonde at SXSW 2015 in Austin, TX in the QRO Concert Photo Gallery

Despite their aforementioned obscurity, you’ll likely recognize a few of the albums ten tracks.  “Bride Song” is tearing up public radio at the moment, while “Wind Blows” and “Blood Cops” will soon be joining it at the top of the independent charts.  Yukon Blonde is an upbeat album full of distortion, haze, and adventure.  The Canadian three-piece rely heavily on adrenaline and the heat of the moment for their upbeat instrumentation, but they’re also quite committed to a formula.  Typically, the band lays a jovial foundation of easy, breezy rock, before building a layered sound and raising the intensity midway with a fitting solo.  Meanwhile, “Ghosts On Film” and “Babies Don’t Like Blue Anymore” speak to the impressive integration of a psychedelic folk singer and a classic rock band.

When Yukon Blonde strays, they don’t go too far from that abovementioned formula.  Aside from a hint of country-rock on “1000 Years”, and a dash of indie-folk on “Wind Blows”, they stick to their usual formula.  Realistically, that is a good thing, considering these are three very proficient musicians.  Unfortunately, that lack of diversity sees the songs on this record run together more than once.  Aside from this, their only flaw is not knowing when to say when.  There are times like in the gang vocal filled, Fleet Foxes-esque track “Wind Blows” that you think, “Wow!”  Then you get a ways further in, and you’re left thinking, “Wow, I wish this would end already!”  The band knows how to put an awesome song together, this much is for sure.  It would do them a world of good, though, to stick to more of the clean cut, almost ‘radio friendly’ tracks that play so well into their talents.  At times just fantastic, and at others painstakingly repetitive, the album is still at very least an admirable endeavour.  It is one however, that doesn’t quite live up to the hype others have surrounded it with.

Joanna Newsom : Have One On Me