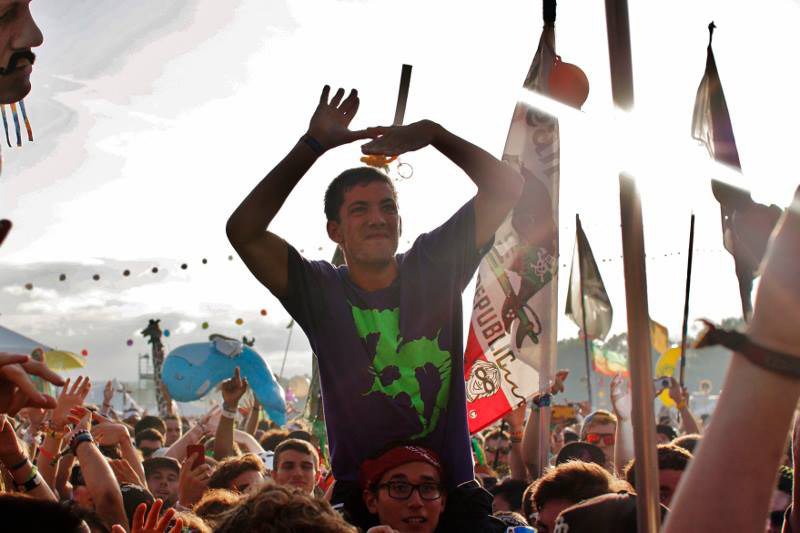 Over the past three years, Toronto-based dubstep act Zeds Dead has gathered a huge cult following among dance music fans.  Releasing their latest EP Hot Sauce on Diplo’s Mad Decent label, they’ve toured extensively both within the US and internationally, making 2013 their biggest year yet.  The duo stopped by NYC with RJD2 last Friday, October 5th, for a night well worth the hype.

Click here for photos of RJD2 at 2014 Wanderlust Squaw Valley in Squaw Valley, CA in the QRO Concert Photo Gallery

RJD2 played an amazing set following openers Branchez and Paper Diamond.  The jazz-samples and live drums that accompanied his hip-hop beats gave his set an acoustic quality to it, at least compared to the bass-heavy sounds the previous openers and headliner.  He played hits like “The Horror” and “Ghostrider” from his popular album Deadringer, as well as tracks from his well-received new album, More Is Than Isn’t.

While indie rock fans may constantly complain about the “horrible acoustics” in Terminal 5 (QRO venue review), it was the ideal venue for an event like this one.  You didn’t have to be on the main floor to dance – the music hit at from every angle of the venue.

The crowd that night was, surprisingly, really good.  Just picture what you’d call a “typical EDM crowd,” and then take away all the extraneous neon and tackiness.  That’s what it was like.  Everyone clearly loved and knew the music, and danced hard to show it.

Click here for photos of Zeds Dead at 2012 CounterPoint Festival in Atlanta, GA in the QRO Concert Photo Gallery

The great thing about Zeds Dead’s performance on Friday night was the variety of their beats.  They may be labeled as dubstep producers, but you can hear just about everything from DnB to trap in their tracks.  The set included almost every song from their repertoire (including “Rude Boy”, “Adrenaline”, “White Satin”, “Turn Around” and “Cowboy”), along with some remixes of “Purple Haze” (Jimmy Hendrix), “I Shot the Sheriff” (Bob Marley), and an out-of-the-blue mix of “I Love It” by Icona Pop (QRO spotlight on).  They even played an encore.

After the show, while a swarm of ravers were walking down 56th street, someone shouted  “IF YOU LOVE Z.D. THEN I LOVE YOU TOO!”, which I think succinctly sums up the [bass]mentality of last Friday’s show.