It’s clear that they thought long and hard about new 'La Futura', putting in the time and effort to push it to its full potential.... 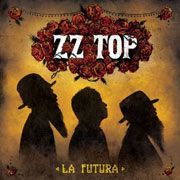 With this album being their 15th studio record to be released, it’s safe to say that ZZ Top have a lot to live up to considering their past releases, of which the most recent was released a whopping nine years ago.  However, it’s clear that they thought long and hard about new La Futura, putting in the time and effort to push it to its full potential; recalling “the directness of [our] early stuff but not turn our backs on contemporary technology… resulting in this melding of past and present” (Gibbons) and in turn the creation of La Futura.

Being a rock band from America you can really hear the blues roots within their music, especially through the amazing guitar riffs of Billy Gibbons.  It’s an impressive return to form (Clark of Guitar International) “for this infamous southern rock trio, and includes some of the best music ZZ Top have ever pushed out.”  And it’s true that these tracks are some of the freshest roadhouse blues around, with the tracks proving to be popular in their general reception.

One of their tracks, “Flyin’ High”, even made a world premiere in space when the unfinished song at the time was played on board a Soyuz spacecraft during its launch to the international space station back in June 2011.

Their songs are incredibly easy to listen to, with great lyrics and that blues foundation which makes them great songs to chill out to.