<img src="http://www.qromag.com/wp-content/uploads/2012/07/12stonesbeneaththescars.jpg" alt="12 Stones ; Beneath the Scars" /><br /> While 12 Stones themselves hopefully believe in the songs they present on <i>Beneath the Scars</i>, it doesn't present anything... 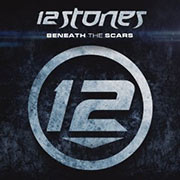 On one hand, it’s a tough business talking about music made by bands like 12 Stones.  Some people wouldn’t agree.  They would say, "There’s nothing tough about it.  It’s quite simple, actually.  They make bad music."  But what is bad music?  Their instruments are in tune.  They play them well enough.  The lead singer stays in key when he sings.  He has written lyrics that convey emotion.  Could it be that when someone says an album is "bad" that he or she just means it doesn’t appeal to or align with his or her musical tastes?  That seems like a more fair judgment to make.

It may sound too sentimental and many may not consider bands like 12 Stones or any other rock band of the like to be worthy of good comments, but at the end of the day they have spent months in a recording studio making an album that hopefully they believe in.  Let’s give credit where credit is due.

That being said, on the other hand, this album likely won’t appeal to the musical tastes of most.  Granted, there are days where for some strange reason mainstream formulaic music seems to have its place and perhaps this album will fulfill the needs of those who are just looking to check out.  Not to get too stereotypical, but there is likely a song somewhere on 12 Stones’ latest album Beneath the Scars that will find its way onto a WWE program or perhaps a documentary about motocross.

It is interesting that 12 Stones’ fame sort of peaked right at the beginning of their career and it wasn’t even because of the band as a whole, but rather just lead singer Paul McCoy’s appearance on the hit Evanescence (QRO photos) song "Bring Me To Life" back in 2003.  As a result, the only album that received moderate attention was their first and self-titled album, which had actually been released a year prior.

The hard truth is that it’s hard to respect a band that has been around for ten years, released four albums, and have failed to branch out from their original sound.  Music is an ever-changing medium and artists have to adapt to stay exciting.  Heck, even Bon Jovi realized this finally and released a country album, not that 12 Stones should try that, but who knows…

While 12 Stones themselves hopefully believe in the songs they present on Beneath the Scars, as stated previously, it doesn’t present anything new.  Unfortunately for this band, if you’ve heard one of their albums, you’ve heard them all.  In fact, there are times where things get downright comical.  Lyrics like "It’s hard to stay sober / When you feel like love is gone" from the song "That Changes Everything" make this album a bit hard to take seriously.  Granted, we’re not talking Metallica and Lou Reed’s Lulu (QRO review) level of ‘what the heck were they thinking in the first place?’, but one can’t help wondering.

MP3 Stream: "That Changes Everything"