Click here for photos from of Grizzly Bear at Williamsburg Waterfront in Brooklyn, NY on August 30th, 2009 in the QRO Concert Photo Gallery

Click here for photos of Grizzly Bear at Pitchfork Music Festival in Chicago, IL on July 19th, 2009 in the QRO Concert Photo Gallery

Day 2 the deluge began.  The steady drizzle that came in the morning turned to a downpour by the afternoon.  ACL goers said goodbye to the soft, newly planted grass and hello to layers of mud and another full day of music.

After years of establishing themselves in the indie music world, Grizzly Bear‘s career finally seems to be garnering attention from a wider audience.  The set, unfortunately, was somewhat of a disappointment.  Their haunting sound and understated energy did not translate well onto the stage, and ended up as an undistinguishable song mass.  One very good song, granted, but nonetheless not the riveting performance that the thick crowd was expecting.

Click here for photos from of Bon Iver at Sound Fix Records in Brooklyn, NY on February 21st, 2008 in the QRO Concert Photo Gallery

Click here for photos of Bon Iver at CMJ 2007 in New York, NY in the QRO Concert Photo Gallery

Immediately following Bon Iver‘s performance, scattered “best show” accolades could be heard through the crowd.  Justin Vernon’s voice poured out over the crowd like the steady rain that 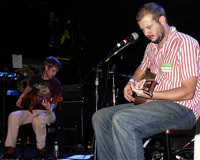 fell throughout the entire show, and gave flawless performances from Bon Iver’s entire repertoire.  The highlight of their performance was a stomping rendition of “Skinny Love” that gave an entire new depth to an already perfect song. 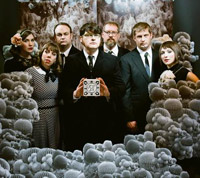 The Decemberists took the stage with Becky Stark (Lavender Diamond – QRO album review) and Shara Worden (My Brightest Diamond – QRO album review) in tow, and rightly so.  The women have become key components to the recordings and live performances of their rock opera Hazards of Love (QRO album review), speeding through delicate love songs and heavy guitar jams.  Colin Meloy & co. bring the story to life, playing the songs in the same order they appear on the album.  While The Decemberists, as ever, were breathtaking, the real show stopper was Worden.  Her powerful blues pipes slammed into the audience during “The Wanting Comes in Waves/Repaid”, along with guitarist Chris Funk’s prog-rock inspired licks.  Stark’s voice, while perfect for the tinny vocals on the album, fell flat in comparison to Worden’s huge presence. 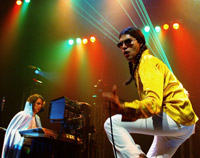 Electronic duo Ghostland Observatory closed out with a flashy, vibrant show.  The Austin locals managed to keep a decent crowd away from the Dave Matthews, offering an hour and a half dance party with perhaps the most intricate light show of ACL 2009.  Psychedelic cowboy Aaron Behrens hopped around stage with unstoppable energy, probably dancing more than anyone in the crowd.  The show came to a point with “Sad Sad City”, an obvious crowd favorite during which audible sing-a-longs could be heard.