<img src="http://www.qromag.com/wp-content/uploads/2009/09/afterthejumprecapday3sm.jpg" alt=" " />Day Three of After the Jump Fest saw some of the most interesting bands so far, but also petered out a bit. ... 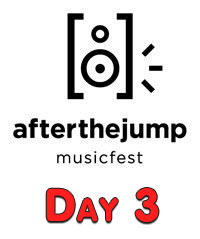 After the Jump is a collection of New York bloggers (currently numbering seventeen, including themusicslut.com and poptartssucktoasted.com) who band together to put on events, featuring some of their favorite undiscovered talent.  Most notable are their showcases at CMJ (QRO recap) and SXSW (QRO recap), but they also throw ‘After the Jump Fest’, a three-day Brooklyn event, this year at Park Slope’s new Littlefield venue (QRO venue review).  Friday-Sunday, August 28th-30th, saw twenty-two bands play Littlefield, and QRO was there for (almost) all of it.

After getting some surprises on Day One (QRO recap), and more what you expected on Day Two (QRO recap), Day Three of After the Jump Fest was more of a mix of the two, but didn’t end as triumphantly as it should have: 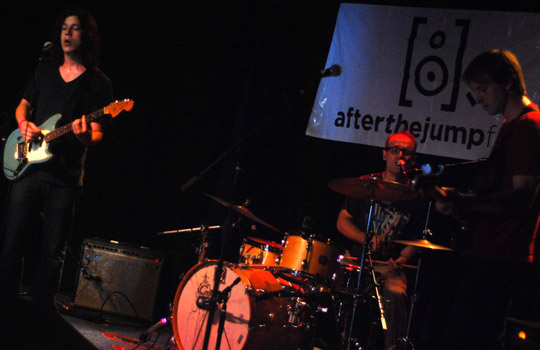 Click here for photos of The Octagon at Piano’s in New York, NY on May 6th, 2009 in the QRO Concert Photo Gallery

While many Brooklyn bands having fun just force the going wild, The Octagon just relax into their fun alt-rock, which is really nicer, as well as being more remarkable.  Their catchy style is reminiscent of eighties alt-fun rock, like The Replacements (QRO re-release reviews). 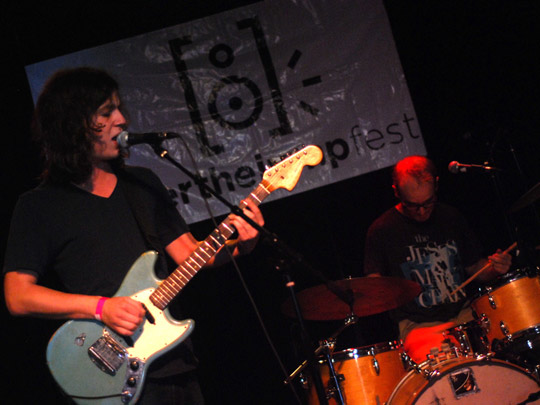 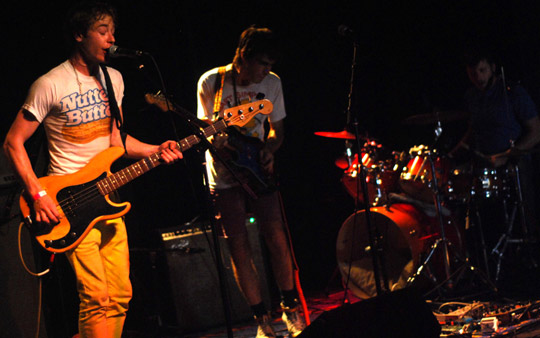 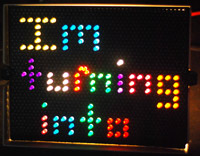 First off, having a Lite-Brite of your name on stage with you is awesome!  And that children’s toy of yore did fit I’m Turning Into (two-thirds of whom are also in My Teenage Stride – QRO photos – from Day Two – QRO recap), thanks to their cheery indie-pop and catchy, bright guitars.  They did throw one curveball, in that all three band members switch all instruments, including drums (akin to Gringo Star – QRO live review). 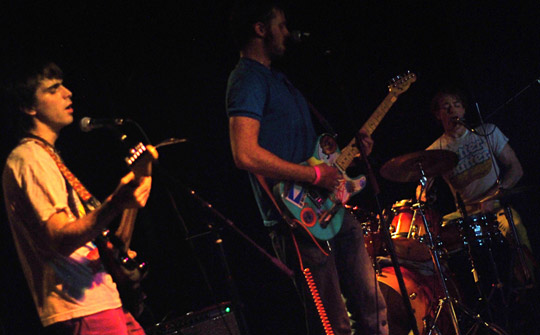 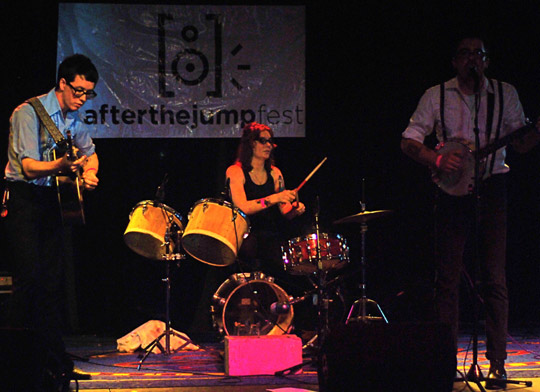 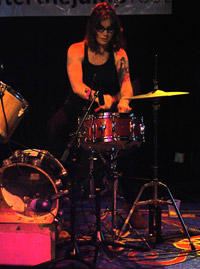 This New London, Connecticut band ("Nuclear submarine capitol of the world…") came down I-95 at the invitation of Greg Jamie of Blood Warrior (see below), and, more significantly, O’Death (QRO album review), to play their first ever show in New York (they live in New London & they’ve never played New York?!?),

and their sound was similar.  They were the first male/female band at After the Jump (and only second with a female, after the abysmal Talk Normal – QRO photos – of Day Two – QRO recap), though the lady drummer is married to the singer/banjoist (so where does that leave the other guy?…). 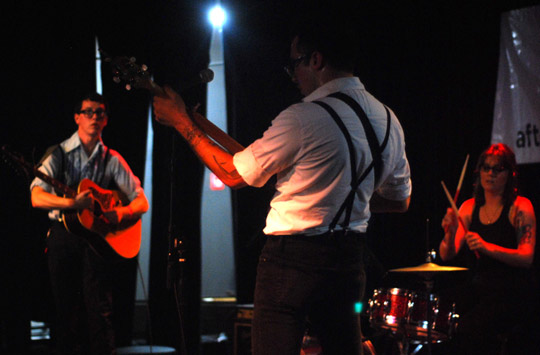 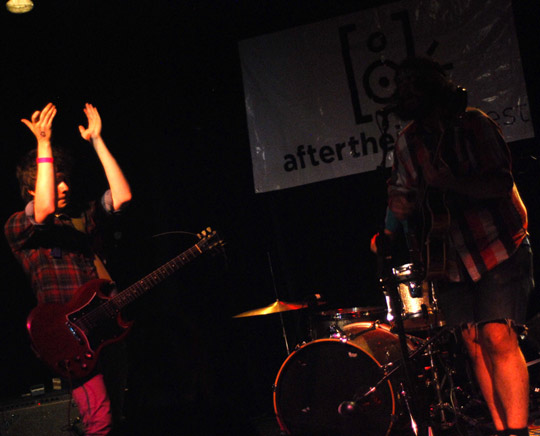 The banjo-party continued with the more Southern-fried Gunfight!  Not that original after Get Haunted (see above), Gunfight! were kind of a more enjoyable version, fun guys having fun (though the bassist’s strap did slip…). 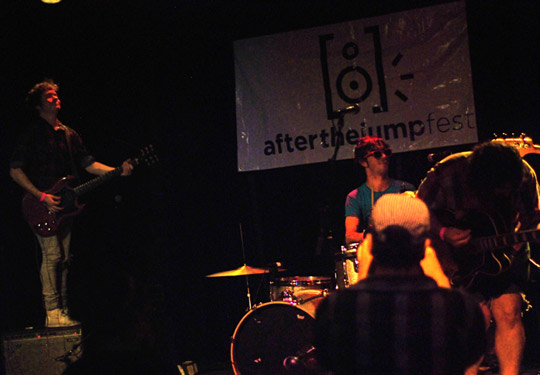 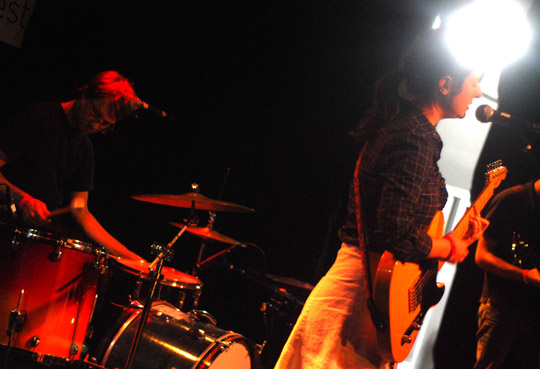 Click here for photos of Hospitality at Starr Space in Brooklyn, NY on April 23rd, 2009 in the QRO Concert Photo Gallery

Click here for photos of Hospitality at Union Pool in Brooklyn, NY on February 24th, 2009 in the QRO Concert Photo Gallery

After all that banjo (okay, two bands…), it was great to have some indie-pop, 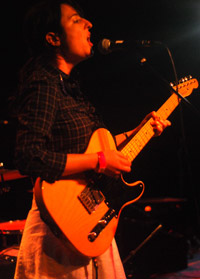 especially Hospitality’s, which was more indie than pop.  Used to think the singer/guitarist’s voice was akin to Kim Deal of The Breeders (QRO live review) – now thinking more like an indie-pop Björk.  She could use to work on her stage presence (could get an indie-cute thing going…).  Stage-right was underlit again all day, this time leaving bassist Brian Betancourt in the shadows, a.k.a. Brooklyn’s hardest-working bassist (okay, in only two other bands, White Rabbits – QRO spotlight on – and Frances – QRO photos – but that’s still 200% more than most other bassists…). 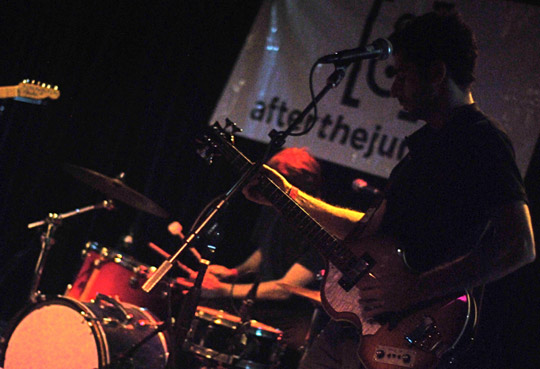 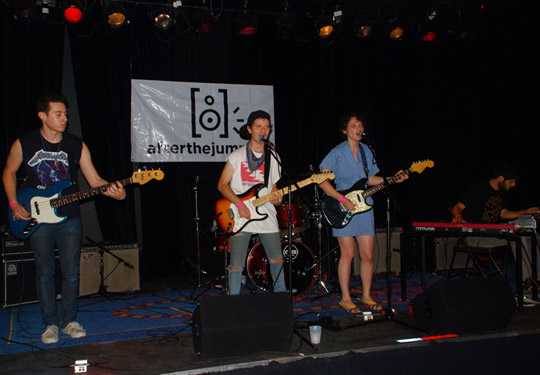 Kinda dream-pop, kinda alt-country (had slide-guitar), kinda good, kinda kinda.  Pretty, sweet, and nice enough, might just have been annoyed because, right before their set, they asked to have the lights turned down… 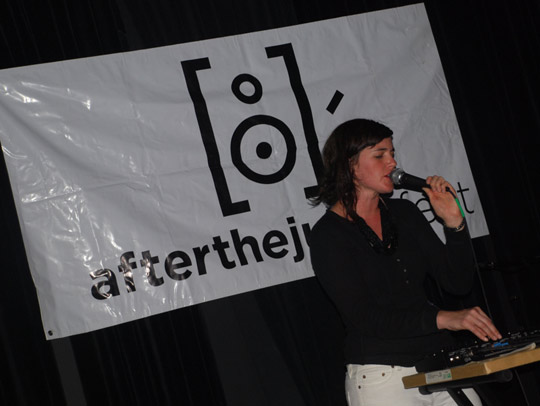 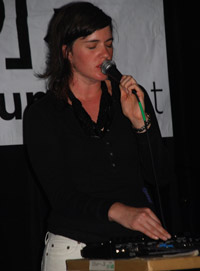 After no ladies on Day One (QRO recap) & only a few on Day Two (QRO recap), Day Three had them in spades, from Gunfight!’s drummer to Hospitality’s main woman to Acrylics’ co-vocalist (see all above) to solo woman Julianna Barwick.  Kind of surprising there wasn’t more solo acts at After the Jump (or maybe all the rest just had their backing bands with them), Barwick was a solitary woman & keyboard.  Definite beauty, definite change from everything else at ATJ, definitely stood too far back from the lip of the stage. 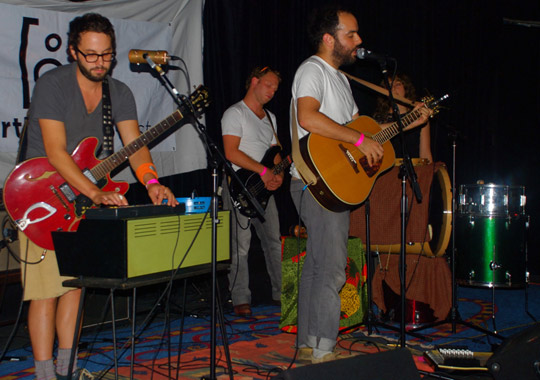 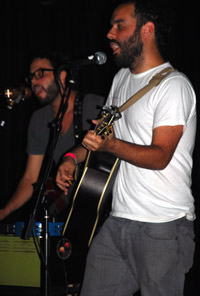 Fronted by Greg Jamie of O’Death (QRO album review), this was a more restrained freak-folk than the wild O’Death (QRO photos).  Unfortunately, the more stripped nature highlighted Jamie’s rather nasal voice, not a strong suit when he sings 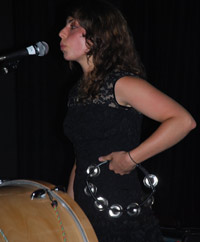 for O’Death (QRO photos).  Kind of more jarring was the absolutely terrible lighting – just a projection of a film, which you could barely see (thus all the flash photos…).  Like when Himalaya (QRO photos) did it on Day One of Northside Festival (QRO recap), kind of took you out of the show.  The band was able to pull off a group country-sing (including another female, probably Jamie’s significant other…), but you couldn’t see them doing it… 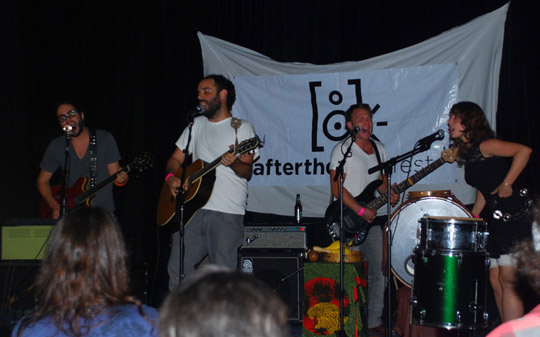 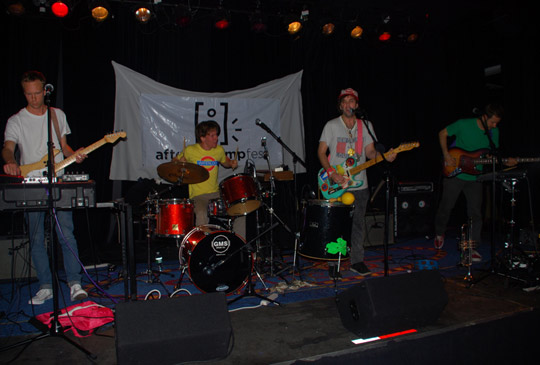 Suckers might have a label behind them, and have served a residency at Piano’s (QRO venue review), but they’re still not enough to close out After the Jump.  While their sound (and lighting…) were an improvement, sort of alt-ish country/rock, was completely spent by the last band of ATJ. 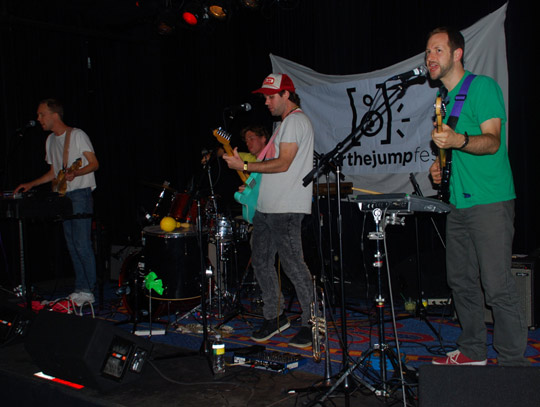 -But the biggest piece of the pie that was missing?  Mark from Top Chef!  Everyone’s favorite New Zealand cook wasn’t there on Day Three, and that was when I’d planned to get a photo of him (and avoid the awkward ‘I treated you like a celebrity last night, now make my burger…).  Also – no red potato salad…

-By the last few acts, instead of feeling like After the Jump was building to something, it more felt like it was petering out.  Some of that probably had to do with the chefs packing up early (Mark wouldn’t have stood for this…), and some due to the energy from NinjaSonik (QRO photos) & Das Racist (QRO photos) late night on Day Two being the peak.

These United States : Everything Touches Everything