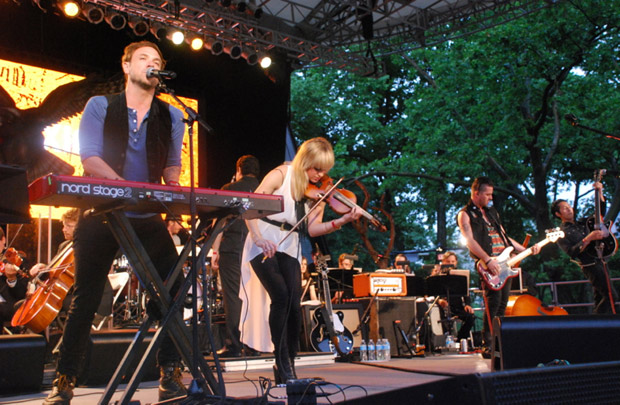 Every summer New York’s SummerStage holds free concerts & events in parks across the city, with the biggest being in, of course, Central Park, at the Rumsey Playfield (QRO venue review).  Mostly the concerts cater to the highbrow (classical, opera, etc.) or world (Latin, Caribbean, etc.), with maybe some old-time rock ‘n’ roll thrown in, but not much for the modern hipster (save for the ticketed shows, which help pay for all the free events).  But this can also lead to some interesting match-ups, like when the young Airborne Toxic Event took the stage at Central Park SummerStage with the Calder Quartet and Ensemble LPR on Tuesday, June 18th. 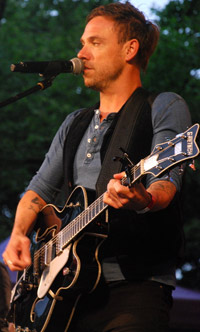 Now, this indie-classical melding isn’t as unprecedented as you might think – Airborne Toxic Event have been playing a bunch of shows with Calder Quartet, and it just a year ago Central Park SummerStage hosted the Latin indie-jam outfit Ozomatli with the New York Pops (QRO photos).  But this union was even more extensive, as it took a modern alt-pop band and teamed them up with two different classical groups. 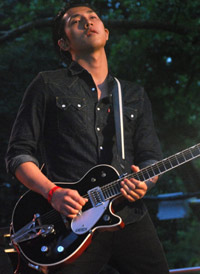 Unfortunately also like at the Ozomatli-New York Pops show last year, poor weather put an early pall on the whole thing.  It hasn’t been a good couple of weeks for outdoor shows in New York (the week before had the mud fest that was Governors Ball – QRO recap – and the storm-shortened Grouplove show at Prospect Park Bandshell – QRO review), and the rain, while not bad, was falling during Calder Quartet’s open set (QRO photos).  However, it did later let up – and the tarped grounds of Central Park SummerStage never got muddy. 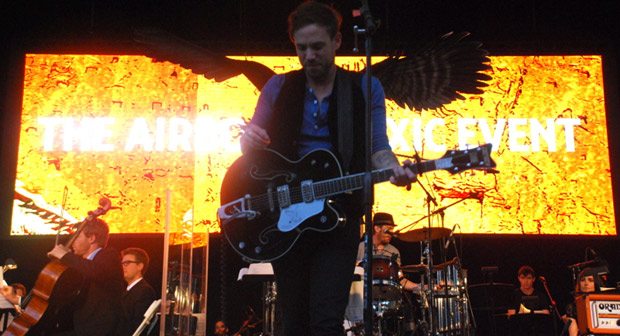 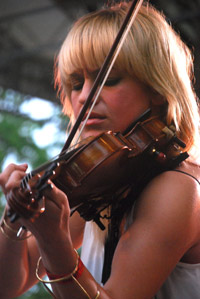 Airborne Toxic Event’s sound does definitely hew towards the emo, but that actually means that it lends itself to performing with an orchestra & quartet.  Of course, ATE also have a violinist (Anna Bulbrook), so they’re already at least some of the way there.  And they not only played old and new material (some for the first time ever, live), but also did a cover medley in the extensive set, including Johnny Cash’s iconic “Ring of Fire” and Bruce Springsteen’s “Born In the U.S.A.” (with singer Mikel Jollett remarking, “This is a protest song” – and it is, before it was ruefully coopted by the Reagan Administration).  They even played off of sheet music, though Jollett admitted that he’d screw up because he can’t read music.  In fact, Jollett was in particularly good spirits, whether praising the kid fan up front (and the kid’s parents for bringing him to the show, though remarking, “Have you read the lyrics?…”), wishing happy birthday to guitarist/keyboardist Steve Chen, or simply remarking, “I don’t know what the problem is with modern music, Spotify, Pandora, iTunes…  All I know is, there ain’t enough bass solos!”, before bassist Noah Harmon launched into one.

At some points in the show Harmon would actually play an upright bass, which is always a welcome sign, but fit particularly well with this evening.  Even if you didn’t know Airborne Toxic Event, Calder Quartet, and/or Ensemble LPR (who are the house orchestra at (le) Poisson Rouge – QRO venue review), even if you weren’t in tented VIP area, you still got a good show. 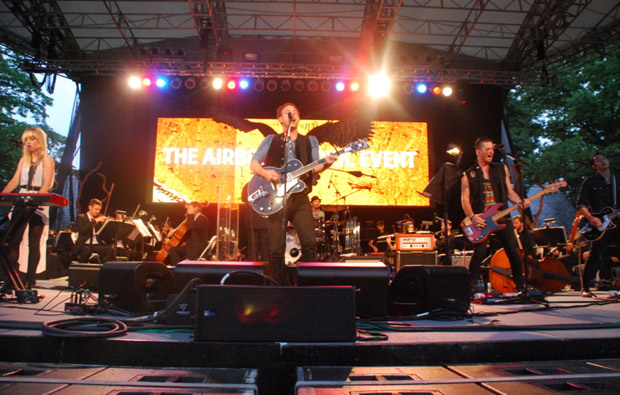