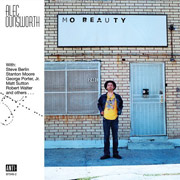 In retrospect, it was kind of obvious that Alec Ounsworth was going to leave Clap Your Hands Say Yeah (QRO live review) and go his own solo route.  While the rest of the band lives in Brooklyn, the singer/guitarist/songwriter lives in Philadelphia.  Ounsworth was the clear frontman of the group, with his signature mannerisms and alt-nasal voice (akin to Violent Femmes’ Gordon Gano).  When, earlier this year, CYHSY announced that they were abandoning plans to record, and instead were taking time off to work on various other projects, the writing was on the wall (despite a one-off return from hiatus a month later to appear on Late Night with Jimmy Fallon – QRO Indie on Late Night TV).

Click here for photos of Alec Ounsworth at CMJ 2009 in New York, NY in the QRO Concert Photo Gallery

However, what wasn’t expected was the direction that Ounsworth would take on his solo debut, Mo Beauty.  Ounsworth turns down CYHSY’s signature distortion in favor of older-timey sounds, as well as his own voice.  That nasal tone is still rather divisive, but it’s actually better, or least better fitting, when Ounsworth strips down and really goes his own alt-folk route.  "Holy, Holy, Holy Moses (Song for New Orleans)" may be a few (or more) years late, but is still powerful, and that more stripped way plays into both Ounsworth’s voice and the ‘new Alec Ounsworth’ he’s trying to bring out on the record.

When Ounsworth goes bigger, one does notice the lack of the rest of the band, who were underrated, or at least underappreciated/noticed in their instrumentation.  There’s a dance hall to the big moments of "Modern Girl (…With Scissors)" or "Idiots in the Rain", but they can also get a bit forgettable.  Stronger is the more pressing and even dangerous "Me and You, Watson", where Ounsworth begins to rebuild his epic.

Mo Beauty ends on the sad loss echo "Obscene Queen Bee #2" and slightly eighties nighttime "When You’ve No Eyes", two interesting pieces that seem to point to further growth.  Alec Ounsworth hasn’t perfected yet where he’s going (might not even know 100% for himself), and Clap Your Hands Say Yeah fans might not be completely (or even mostly) behind where that is, but he definitely warrants further study.