Alkaline Trio has chosen to celebrate their history of sadistic pop punk with a semi-unplugged reworking of many of the band's most beloved songs, along with a select few... 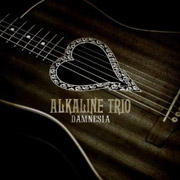 It was in 1999 when the now-famous, Illinois-based Alkaline Trio released their first full-length album Goddamnit.  Since then the band has seen lineup changes, ever rising spots on the Billboard Charts, and the release of seven other full-length efforts.  Now, twelve years after Goddamnit, Alkaline Trio has chosen to celebrate their history of sadistic pop punk with the release of Damnesia, a semi-unplugged reworking of many of the band’s most beloved songs, along with a select few new tracks and a cover thrown in for good measure.

Rather than being a straight forward acoustic album, Damnesia acts more as a basis for the band to rework many of their songs.  Straight forward punk rock songs such as Good Mourning‘s “Every Thug Needs a Lady” and “This Could Be Loved” are turned into slower, more haunting renditions while some originally solo, acoustic tracks such as “Blue in the Face” have been turned into three piece love ballads with more power energy and power put behind them.

Click here for photos of Alkaline Trio at 2018 Riot Fest in Chicago, IL in the QRO Concert Photo Gallery

Click here for photos of Alkaline Trio at 2012 Live at Leeds in Leeds, U.K. in the QRO Concert Photo Gallery

Click here for photos of Alkaline Trio at 2012 Groezrock in Meerhout, Belgium in the QRO Concert Photo Gallery

There is heavy use of piano on several of the reworked tracks, which is not unfamiliar territory for the band.  2005’s Crimson saw the initial movement away from the drums, bass, and guitar-only aesthetic that the band held through the first part of their carrier.  On Damnesia, the piano works its way into several tracks as a driving force for the songs, cutting down the punk speed of many of the original incarnations and lending itself to more of a desperate feel for the songs already grim overtones.

The album also includes two new acoustic songs among the reworkings.  The first is guitarist Matt Skiba’s solo, macabre tribute to the numbing effects of cheap liquor titled “Olde English 800”.  The second is bassist Dan Andrio’s offer, a classic mourning of a memory in the somber love song “I Remember a Rooftop”.  The two new originals are lyrically what Alkaline Trio has become known for, full of sarcasm, longing for the past and heavy imagery of drug use and suicide.  It is interesting however to hear how the songs hit as stripped acoustic tracks from their conception, especially in the case of Andrio’s, who, unlike Skiba, rarely records acoustic song.

A cover of The Violent Femmes’ number “I Held Her in My Arms” makes its way onto Damnesia and adjusts to being an Alkaline Trio song quite easily.  The Violent Femmes stripped down style equates well to Damnesia‘s format and The Femmes’ influence has always been quite clear on Alkaline Trio’s works, so it is a nice direct nod of thanks from the Illinois punks to one of the original mid-western alternative heroes.

All and all, Damnesia is an extremely well crafted tribute to Alkaline Trio’s now 15-year career.  While many bands would mark their career anniversaries by simply releasing a greatest hits album or a straight-forward acoustic album, Alkaline Trio has chosen to take a more creative path and intimately re-imagined many of their old punk hits.  Despite some of the obvious complaints of an album consisting mostly of rehashed songs, Damnesia succeeds at what it attempts and is something that anyone who has ever been a fan of Alkaline Trio should check out.