Andrew Jackson Jihad's newest effort, 'Knife Man', feels like the kind of album that will have no choice but to live in the shadows of its predecessors.... 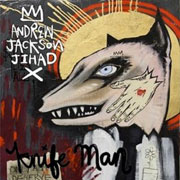 It’s been a two years since Andrew Jackson Jihad released Can’t Maintain, and four since their standout People That Can Eat People Are the Luckiest People in the World, but their newest effort, Knife Man, feels like the kind of album that will have no choice but to live in the shadows of its predecessors.

The two creative forces (and only static members) behind Andrew Jackson Jihad – Sean Bonnette and Ben Gallaty – have never shied away from having opinions, and the cast of characters they employ to provide the music to soundtrack their demented and profanity-laced tirades are never slouches, but for the first time in the band’s short history it feels like the music far outshines the lyrics.

The album starts off strong, though with an opening track called “The Michael Jordan of Drunk Driving” – how could it not?  The boundary-pushing nature of their take on folk-punk really shines through early on with tracks like “Back Pack” and “Hate Rain On Me”, which provide the perfect platform for the demented visions of death, destruction and anger that Bonnette and Gallaty are capable of relating like few others.

However, through the middle section of the album their generally interesting (or at least creepy) social and political rants start to grate.  By the time “Sad Songs (intermission)” rolls around the album comes off the rails.  There is no album defining song like “People II: The Reckoning” here, despite their efforts on “People II: Still Peoplin'”.

But all is not lost – by the time the album closer “Big Bird” and its surprisingly sweeping string section arrive they seem to have moved out of their Americana roots and ironically closer to the crazed Canadian kitchen-sink garage rockers King Khan & The Shrines (QRO live review), or the now defunct Deadly Snakes.

The musical growth on Knife Man remains the most intriguing and promising feature of the band moving forward, and although this album’s sprawling feel seems to make it somehow less than its concise and brilliant predecessors, there are still enough highs to leave hope that this isn’t the beginning of the end for Andrew Jackson Jihad.  If they allow their more eclectic take on folk-punk to seep through into their song writing, it may reinvigorate them by the time prep for the next album rolls around.  Besides, how could a band that compares carrying a dead body to carrying a backpack be running out of ideas?