Anna Ternheim : Leaving On a Mayday 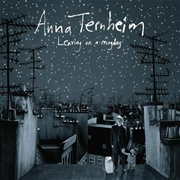 Just when everybody thought that the Swedish indie-pop well was going to run dry last year, it was the ladies who picked up the torch and ran with it.  Lykke Li (QRO album review) was the so-called ‘break-out’ of last Octobe’s CMJ (QRO recap), but also coming out & up were those she had shared a bill with on tour of America last year, El Perro Del Mar (QRO album review) and Anna Ternheim.  Ternheim didn’t have the funky name to get people’s attention (you know that’s why Peter Björn & John – QRO interview – included Björn…), but she did have a nice entrée to America in Halfway To Fivepoints (QRO review), a collection of her Grammyjury (Swedish Grammys)-winning work, from such records of hers as Separation Road and Somebody Outside.  This has allowed her time to make a whole, completely new record, Leaving On a Mayday, which has already swept this year’s Grammyjury (winning ‘Album of the Year’ and ‘Female Artist of the Year’), and now comes to America while those other Swedish ladies are still waiting – and hopefully its best pieces will vaunt her to the front of the pack.

Leaving showcases Ternheim’s ability to both strip to a stark, haunting sound, but also retain an orchestral overview that she builds out of that.  Pieces like the pressing opener "What Have I Done", plus "No, I Don’t Remember" and closer "Black Sunday Afternoon" reverberate with a strings-based haunt & echo.  Meanwhile, "Let It Rain" strips to, and then builds from, a background rhythm that brings a dark downpour to the beautiful song.  Ternheim isn’t entirely mopey, as she marries catch and enjoyable rhythm to her natural sadness on "Losing You".

However, one wishes that there had been more songs like that, and less where Ternheim stripped down and stayed stripped.  On tracks like "Terrified", "My Heart Still Beats For You" and "Summer Rain", Ternheim relies almost exclusively on her voice, and while it’s a good voice, the pieces end up being kind of boring.  Only "Off the Road" manages to avoid this fate, as Ternheim ups the haunt by placing her voice in a removed, empty room.

Leaving On a Mayday was produced by Peter Björn & John’s Björn Yttling, who seems to produce everything that comes out of that country these days, from Shout Out Louds’ Our Ill Wills (QRO review) to Taken By Trees’ Open Field (QRO review).  Though it couldn’t be as accomplished as the excellent Ill Wills, Leaving certainly stands above the weak Open Field, despite them both being from singer/songstresses (Taken By Trees is Victoria Bergsman, the female vocals on PB&J’s "Young Folks" and formerly of The Concretes – QRO post-Bergsman album review), and Ternheim’s best tracks should hopefully give her the kind of recognition in the U.S. of Bergsman or Lykke Li.  America’s always loved its Swedish ladies, from the Swedish Bikini Team to Rebecca Romijn (though it’s Finland whose president is Conan O’Brien look-a-like Tarja Halonen…), but now maybe we’ll stop focusing on bone structure, and start thinking about music.