<img src="http://www.qromag.com/wp-content/uploads/2011/04/apparatjikmar2.jpg" alt="Apparatjik : Live" />It is not everyday that a pop band gets an invitation from a museum to perform.<span>  </span>But Apparatjik is not just another act... 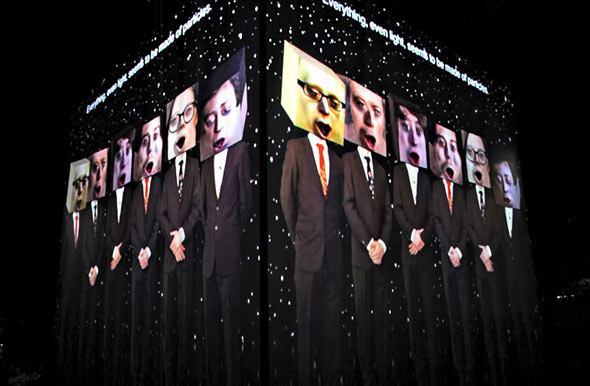 It is not everyday that a pop band gets an invitation from a museum to perform.  But Apparatjik is not just another act trying to break new grounds by experimenting with musical elements.  The super group comprised of Jonas Bjerre (lead singer of Mew – QRO live review), Magne Furuholmen (QRO interview – keyboardist of a-ha – QRO live review), Guy Berryman (bassist of Coldplay – QRO album review), and Martin Terefe (producer), dwell in the world where quantum theory is the main preoccupation, and their main task is to fuse art, science, and music to create entertainment that heightens the brain activity, in contrast to senses dulling omnipresent flat screen TVs.

Inspired by Bauhaus professor László Moholy-Nagy’s kinetic light space modulator (Licht-Raum-Modulator), The Apparatjik Light Space Modulator explores the relationship between light, space, and motion, via a large-scale cube.  Along with a month long installation, Apparatjik had three scheduled performances (March 12, 26 &27) at the Neue Nationalgalerie Berlin, and QRO was there for the last two dates. 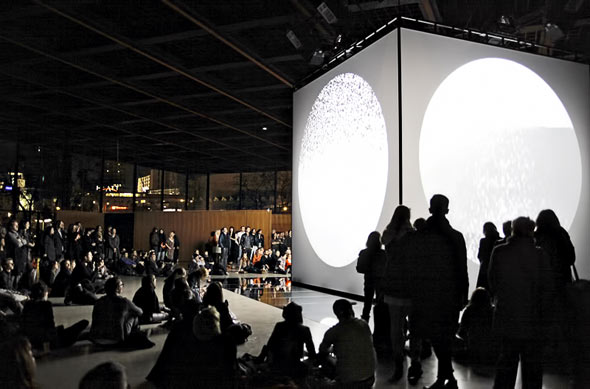 On a cool Saturday night on March 26th, the glass hall of Neue Nationalgalerie on Potsdamer Strasse could be faintly spotted from a distance in the darkness, aided by a prodigious cube.  Without any seats or barricades – the space between the walls of the hall and the surface of the cube was open for occupation by any matter.  But who’d dare to step on the reflective tiles that edged around the cube?  With dimensions ranging between 30-40 feet high and wide, the main attraction loomed like a monolith of 2001: A Space Odyssey.  We looked upon its surface, processing entertainment but subconsciously seeking answers to the content and message of the projected sights and sounds. 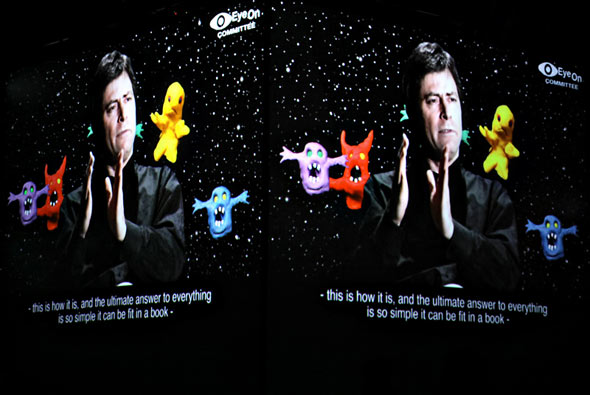 Clips that are readily accessible online – interviews with the four Apparatjik members and experimental videos they have created – looped prior to the main event.  A video of Apparatjik’s hero, the astrophysicist Max Tegmark talking about his mathematical universe theory with an idiosyncratic humor served as sort of a preface to the band’s performance.  While science is a serious topic, the video reminded us that after all, we are here to be entertained, and humor was a natural consequence of the absurdity – taking cue from the Dada ideology that negates any kind of conformity.  A sort of quasi-commercial for one of the sponsors of the event – Smart car – followed Tegmark’s blurbs.  Berlin seen through mirrored Smart car – fragments of the famous city became unfamiliar in broken up, displaced spatial reality. 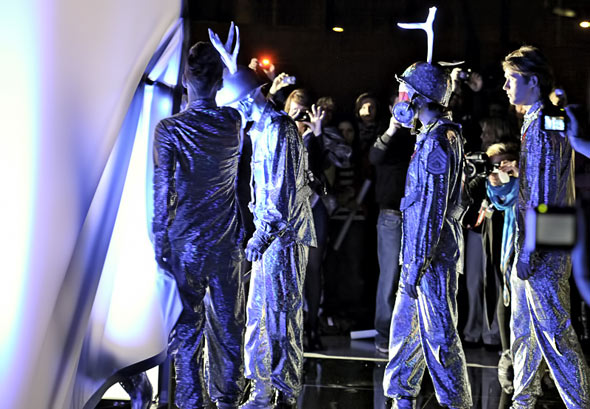 Imitative of a red carpet entrance, the members of Apparatjik was escorted by fellow comrades dressed in the same silvery space suit, but without the antlered helmets and gas masks.  The four members walked around the cube, each staking their sides and directing their LED flashlights – the flashing of lights seemed random and spur of the moment.  After a few minutes, just before we could make out which member of Apparatjik was behind the masks, they were led inside the cube. 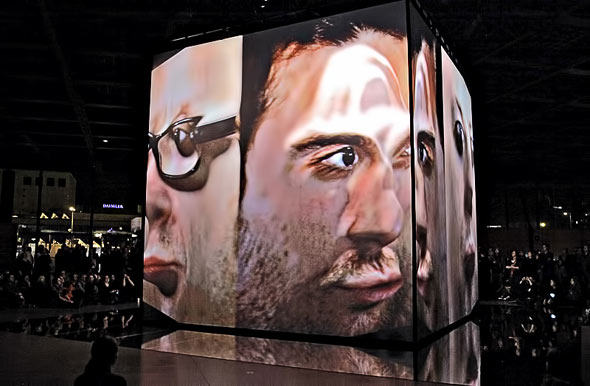 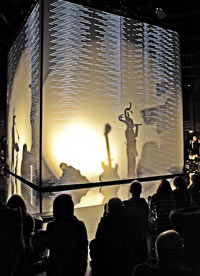 The introductory electronic piece pulsated, accompanied by matched urgency of projected shadowy figures, seemingly with help of a crew with choreographed flashlights, strobed intensely to almost cause a seizure.  The visual employment of gliding shadows continued on for the first three songs, which may have been new material.  Then the audience were treated to something new – face of each member of Apparatjik covering the surface of the cube, it rotated, mimicking machinery.  The gyration speed up until the faces became blurry amalgamations and transitioned into flashing blue projections for "Arrow and Bow" – one of the more immediate pop tunes with Bjerre’s wistful vocals.  The playful "Snow Crystals" combined the shadow projections with digital pattern of snow crystals.  One of Apparatjik’s earliest video experiments, the short "Granule No 8", provided a breather before launching into the melancholic "Quiz Show".  A keyboard player, wearing a colorful shirt with a big smiley cartoony mask provided the Apparatjik’s trademark absurd paradox.  The somewhat unsettling video was followed by one of the most illusory spatial displays that accompanied the aching "Supersonic Sound".  Red liquid soaked into the cube as if blood was being immersed in water.  The rousing "Look Kids" returned to the shadowy projections as the main visual feast, combined with graphic lines and shapes.  After its conclusion, various colored cubes danced in patterns in accordance with soothing electronic soundscape that was child-like in its simplicity and clarity – recalling the five-tone musical phrase the aliens used to communicate in the Close Encounters of the Third Kind.  "Datascroller" displayed TV static for over half of the song then displayed flashes of performers’ shadows.

Now and then short pieces provided recess between the songs, such as images of clouds gliding over the cube, accompanied by ambient music.  Before returning to more traditional album tracks, a sort of PSA with six cube-headed Apparatjiks standing side by side in suits sung in unison, giving us the basic concept of quantum theory.

One of the most energized pieces is Apparatjik’s latest song, "Combat Disco" that has been used for Smart car promotion.  The cube showed the martial arts inspired movements of the performers as they moved to the "hoo-has", oscillating wildly from blue to white backgrounds.

"Josie" returned to its standard white projection.  The first track off We Are Here (QRO review), "Deadbeat", finished the performance inside the cube, combining factoids and fictitious statements, Apparatjiks faces morphed on the surface of cube – hovering like gods or wizards of Oz.  The transmission ended with a chaotic oscillation of fuzzed out cubes dispersed with the faces. 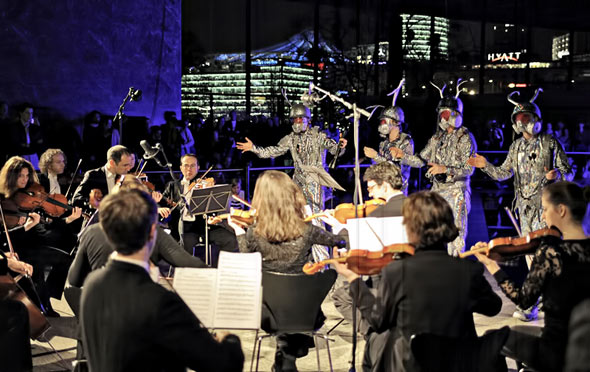 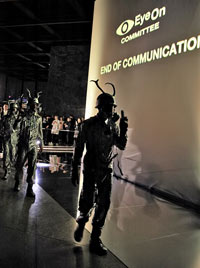 On the following and closing night of The Apparatjik Light Space Modulator, in honor of 125th anniversary of Mies van der Rohe’s birth, who was the architect of Neue Nationalgalerie, the Deutsches Kammerorchester (German chamber orchestra) was added to the bill.  Before entering their cube, the Apparatjiks attempted to conduct the classical ensemble.  But it was obvious and absurd to think these antlered spacemen were neither actually conducting nor the musicians seemed to heed their hand gestures.  They took about 15 minutes playing classical compositions while the looming cube displayed what appear to be dated documents of museumgoers.  One might have expected something more experimental added to the music, given the nature of the project.

The production inside the cube played out same as the previous night.  The members of Deutsches Kammerorchester sat and enjoyed the show, negating expectations to now and then actively perform in conjunction with Apparatjik.  Once the performance inside the cube was finished, the four comrades returned to conduct over Deutsches Kammerorchester.  Then they all exited – as if they were returning to their space ship that will take them into the next dimension.

The Apparatjik Light Space Modulator proved that art and entertainment could share harmonious existence.  Whether you are a fan of Apparatjik’s music or not, it was easy to be engrossed in their novel production. 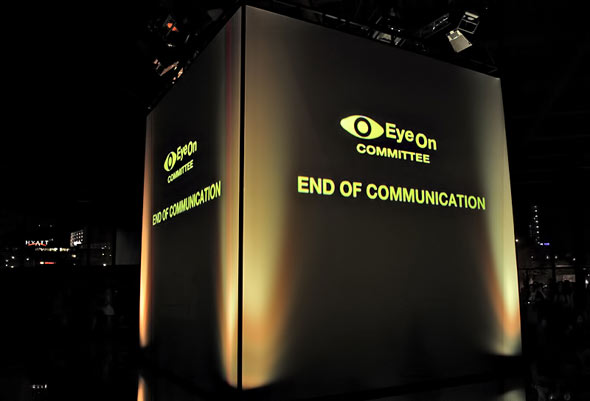