<img src="http://www.qromag.com/wp-content/uploads/2012/01/arcticmonkeysjan2.jpg" alt="Arctic Monkeys : Live" />Arctic Monkeys took to the stage at The Palace Theatre in Melbourne on one of the hottest nights of the Australian summer... Click here for photos of Arctic Monkeys at Webster Hall in New York, NY on September 16th, 2013 in the QRO Concert Photo Gallery

Click here for photos of Arctic Monkeys at Frank Erwin Center in Austin, TX on April 25th, 2012 in the QRO Concert Photo Gallery

After the riotous fun of Miles Kane, Arctic Monkeys took to the stage at The Palace Theatre in Melbourne on Tuesday, January 2nd, one of the hottest nights of the Australian summer so far – 40°C or 104°F.  The heat hardly seemed to trouble the Yorkshire rock outfit as they proceeded to satisfy the packed theatre of sweaty, devoted fans for the next two hours.  With last year’s release of Suck It and See (QRO review), the band received much criticism for the new material.  However, what became clear on this night was that these heavier, darker songs translate very well into live language.

Alex Turner and company spawned out of the smoky shadows of backstage and dived into “Don’t Sit Down ‘Cause I’ve Moved Your Chair”.  One of the heaviest riffs in their catalogue, it prompted an appropriately intense response of instantaneous, widespread head banging and crowd-surfing.  It was clear from the outset that this was going to be an exciting night, full of thrills, as rock should be.  After being applauded for a good few minutes, they retreated back into older material from Favourite Worst Nightmare (QRO review) and Humbug (QRO review), before coming full circle to Suck It and See with “The Hellcat Spangled Shalalala” and “Library Pictures”. The Sheffield lads were just warming up.  Turner, with hair like a modern reincarnation of Elvis, pointed to the crowd saying, “I know what you want,” before busting out the twangy classic “Brianstorm”, which the entire venue sings in chorale.  The days of the awkward, adolescent Arctic Monkeys are well and truly gone.  They are confident and in command of, not only new material, but also the old, and with renewed energy.  This is a band that, though not as renowned as when they first exploded into fame, has a clear sense of their history and roots whilst moving forward gracefully.  It is both sad and enjoyable to see them grow up.

The middle of the show was a smorgasbord of Monkeys delights.   A nostalgic hark back to the first two tracks from their debut album, “A View from the Afternoon” and “I Bet You Look Good On the Dancefloor”, played in succession was a nice touch – a gift for old school fans, unfortunately lacking the third instalment of “Fake Tales of San Francisco”.  “Brick By Brick”, “This House is a Circus” and “Still Take You Home” were utterly amazing, and gave the night a well-rounded feel.  Amidst this section, Miles Kane sauntered on stage for the B-side “Little Illusion Machine (Wirral Riddler)” – a hidden gem and rarity.

To draw the curtains to a close, the group delved into various sections of their library.  “Do Me a Favour” was rhythmically pulsating, maintaining all the vigour the show had offered thus far, whilst “Black Treacle” was one of the more tender offerings of the night.  Saving the best for last, “When the Sun Goes Down” was played with utmost gusto and performed primarily by the audience; Turner took a back seat and enjoyed “They said it changes when the sun goes down” echo through the room into the blistering Melbourne city night. Of course there was to be an encore.  Opening with “Suck It and See” was unsurprising, since it is the eponymous song of the tour and a melodic charmer to say goodnight with.  After “Fluorescent Adolescent” Miles Kane re-joined Arctic Monkeys for the final tune, “505”, a miasmic, tremolo-saturated number, which ended the night on an eerily heartbreaking note.  Here within, Turner and Kane partook in a ‘bromance’, hardly taking their eyes off one another.  At song’s outro, members of the band, including Kane, exited one by one, leaving Turner exposed and alone: a solo figure in shadows, a musical genius playing the final haunting notes of departure.  The crowd was left in unanimous awe. 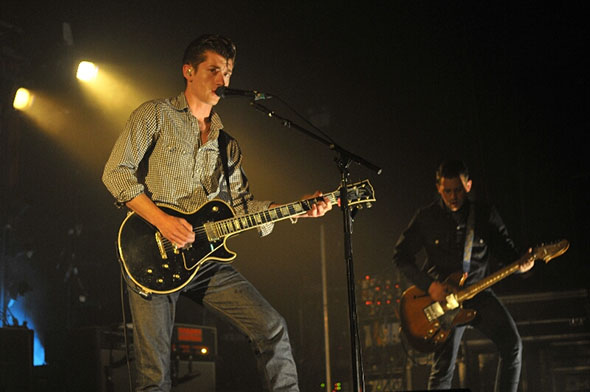 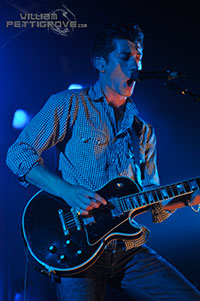