Portland’s Jack Lesser Lewis’ Awkward Energy recently released a full-length LP in May, Lvov Swims the Willamette, a record forged from collaborations that stretches from the west cost to... 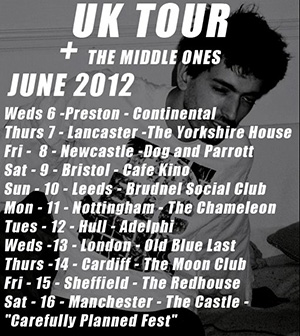 Portland’s Jack Lesser Lewis’ Awkward Energy recently released a full-length LP in May, Lvov Swims the Willamette, a record forged from collaborations that stretches from the west cost to France.  Fourth installment of Lewis’ ‘Lvov Cycle’ which includes Lvov’s Lament (2002), Lvov Reads His Notes (2004) and Lvov Goes To Emandee (2006), it is a continued testament to why awkward energy is so fitting to follow his name.  With a press release describing as "A conversation with the pushy-neighborhood cat, a haunted library, trying to get some friends to dance on new years day, the dangers and joys of nature, and the confusing beginnings of a relationship.", Lewis’ world is anything but simple. .

Best known as bass player, singer, and sometime songwriter for his brother’s band Jeffrey Lewis & The Junkyard (Rough Trade Records), Jack is no stranger to globe trotting. His touring resume includes Stephen Malkmus and the Jicks, The Vaselines, The Mountain Goats, The Cribs and The Thermals. This past April, the Lewis brothers opened for Pulp at Radio City Music Hall in New York. Catch Jack and Awkward Energy touring in the UK this month.

Get a free download here of the song "Go Away Whitey" as heard on BBC 6 (on Marc Riley and Tom Ravonscroft), and stream the track below:

Stream the track "Go Away Whitey"

Still Flyin’ : On a Bedroom Wall