<img src="http://www.qromag.com/wp-content/uploads/2012/12/awolnationdec12.jpg" alt="AWOLNATION : Live" /><br /> Fans of a wide range of ages and personalities joined bands AWOLNATION, Youngblood Hawke, and A Silent Film for a weeknight.... 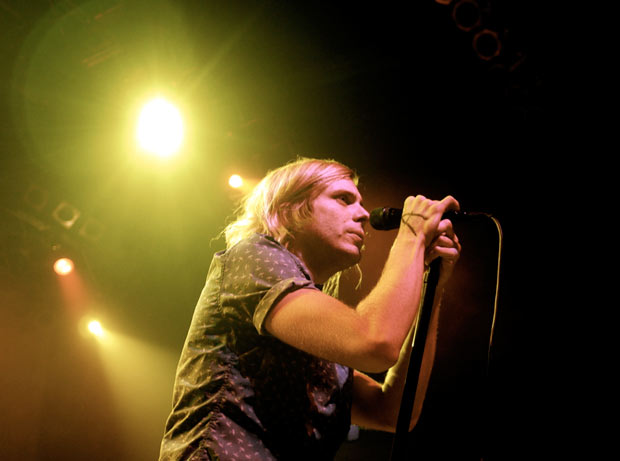 The House of Blues Boston typically has some good acts stroll through and on Wednesday, December 12th this was no exception.  Fans of a wide range of ages and personalities joined bands AWOLNATION, Youngblood Hawke, and A Silent Film for a weeknight that probably would have otherwise been spent on the couch if it weren’t for Radio 92.9’s Ho Ho Hoedown.  Although it wasn’t nearly close to selling out (anyone up there in the balcony?!), those that did attend seemed to very much enjoy themselves. 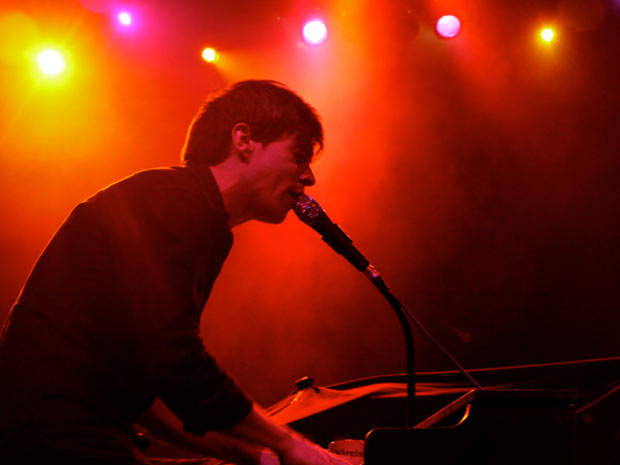 A Silent Film, consisting of Robert Stevenson (vocals/piano), Karl Bareham (guitar), Spencer Walker (drums), and Ali Hussain (bass) warmed up the crowd around 8 pm for a short forty-five minute-ish, seven song set.  The four-piece rock group played the majority of their songs off their new album Sand & Snow and did so by opening with “Reaching the Potential”.  A vocally lined slow song with crashing cymbals and fast paced drumming

was a great buildup for their set which eventually brought them into a strong three song closing – “Anastasia”, “Harbour Lights”, and one of the most popular songs of this past summer, “Danny, Dakota, and the Wishing Well”.  Yes, it’s that band that sings that song.  Solid first impression from the English boys who mentioned this was their last stop of the tour.  If you want to try to relive this concert you can do so by listening to these songs, in this order, because yes, this is the set list: “Reaching the Potential”, “Driven By A Beating Heart”, “You Will Leave A Mark”, “Thousand Mile Race”, “Anastasia”, “Harbour Lights”, “Danny, Dakota, and the Wishing Well”.

Spoiler alert: This short set list won’t do them justice. See them live. 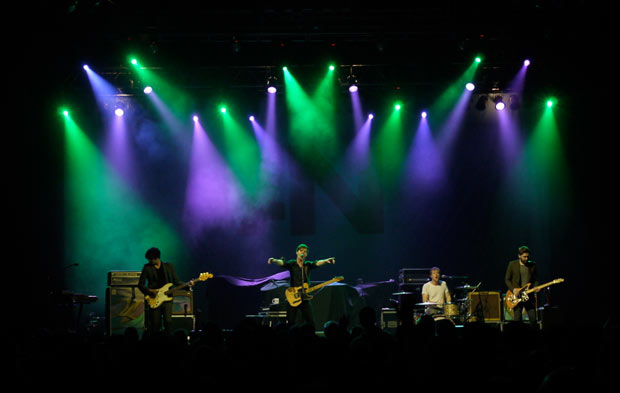 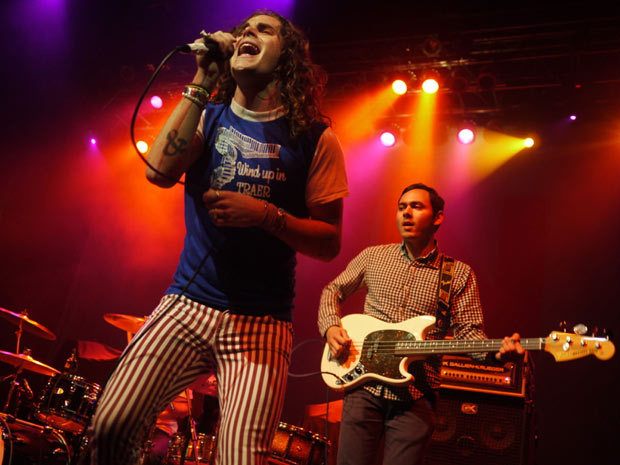 Click here for QRO’s review of Youngblood Hawke at Crystal Ballroom in Portland, OR on November 20th, 2012

Youngblood Hawke had the privilege of a longer set, and the band, specifically frontman Sam Martin, used this to their advantage.  The indie-pop group from California simply play fun songs.  When fun songs are played, the crowd has fun.  When the crowd has fun, the band has fun and the fun circle continues. 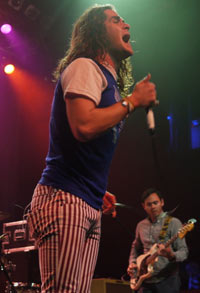 With only a few pieces in their arsenal off their self-titled EP, Youngblood Hawke (Sam Martin, Nik Hughes, Tasso Smith, Alice Katz, Simon Katz) played all of those (and then some) plus an unexpected Notorious B.I.G. “Juicy” cover.  And it worked.  The crowd loved it.  The upbeat energetic songs were constant. This music brings out the youth in everyone and doesn’t need to ask people to dance. It just happens.  Standout songs came from “Stars (Hold On)” and “Rootless”, but the crowd favorite was easily “We Come Running”, the latest single and the one that will propel the band to greater heights.

Spoiler alert: See these guys live too. Listen to their EP. Listen to it again… and again.  It’s super poppy and super good.  You’ll want to tell your friends “I told you so…” when they get more noticed next year after their first full album release. 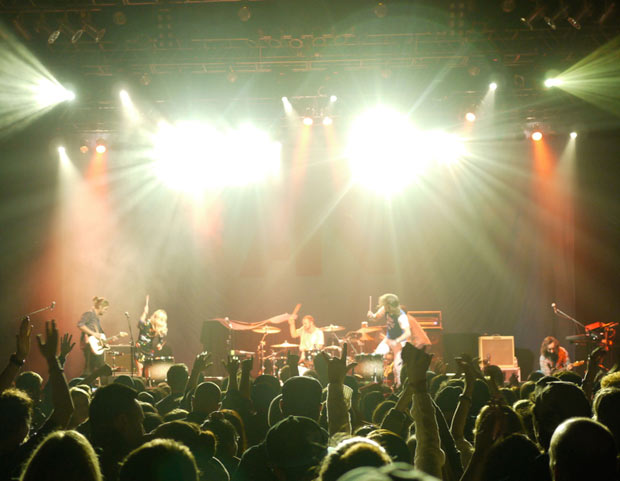 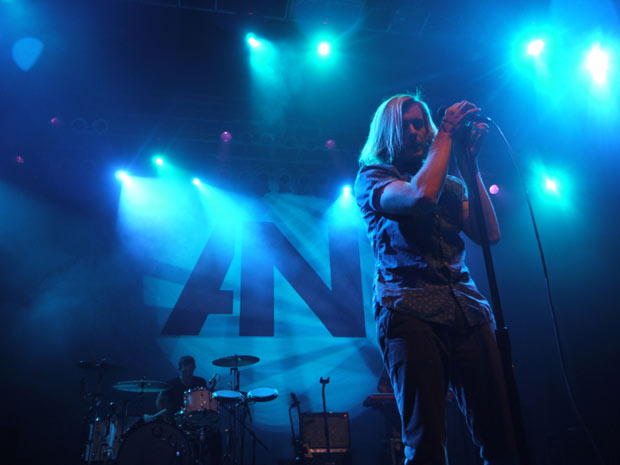 When the first notes of “Guilty Filthy Soul” began from electronic rock band AWOLNATION, it was evident the majority of this crowd was there to see Aaron Bruno and crew.  The audience became more enthusiastic, more first pumps were thrust into the open air, and without fail, more male growls and female shrieks echoed throughout the venue.  Rock show commence!  Cue “Not Your Fault” and “Kill Your Heroes”, the two most recent singles, and a much heavier, hang banging “Soul Wars”.  They may be dubbed electronic rock based off of Megalithic Symphony but for a live show, AWOLNATION is a straight hard rock band.  At one point crowd surfers constantly filtered towards the stage and into the hands of a busy security personnel, narrowly missing the centered mosh pit. 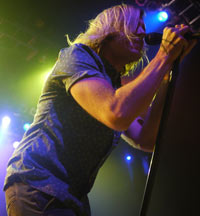 During “All I Need”, Bruno brought the crowd together by telling everyone to put their arms around the person next to them, especially if they didn’t know them and help sing along.  Without question “Sail” was the crowd favorite, but the second surprise of the night was when Bruno began singing an a cappella version of Bill Withers’ “Lean On Me”.

Spoiler alert: Expect a Bill Withers’ “Lean On Me” a cappella cover during their set.  Was this already mentioned?  Damn, sorry…

AWOLNATION playing “Kill Your Heroes” live at House of Blues in Boston, MA on 12/12/12:

A few surprises, a lot of dancing, and three stellar live bands put on for a great weeknight performance.  Keep on eye on all three of these bands.  All are still quite early on in their career and they all have unique aspects to their live shows that will make them stand out among others. 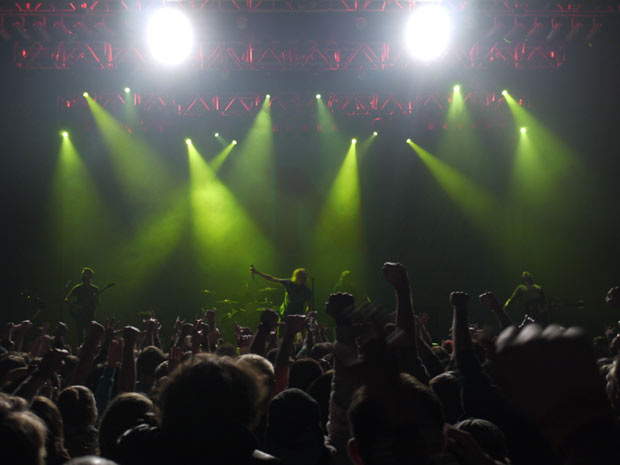