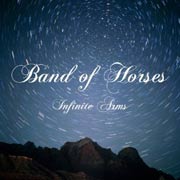 There was a time, not that long ago, when ‘alt-country’ seemed like an oxymoron.  Isn’t country music the most mainstream of genres, the most belittled by the alternative music scene?  Yet the Bush years somehow forged the two into a style, despite the indie scene’s hatred for the country music-loving President, as the left-of-center world learned (or was forced to learn) much more about red state America, and embraced such things as the armed forces – and country music.  A bit ahead of the trend was Seattle’s Band of Horses, though indie-breakthrough Everything All the Time was a bit more haunting than country.  Since the 2006 departure of co-founder Matt Brooke left singer/guitarist Benjamin Bridwell the driving force, the Band has moved more & more in an alt-country direction, with 2007’s Cease to Begin (QRO review), and now Infinite Arms, which sees a more polished outfit as well – for good & bad.

The carrying, sweet, orchestral opener "Factory" sets a certain tone with Arms, as it’s perhaps too sweet.  There are a number of tracks on the record that are sweet to the point of cheesiness, like the soft-rock-ish back-to-back "Blue Beard" and "On My Way Back Home".  And when Band of Horses strip to beauty on the album, they can get a little boring, such as with "Evening Kitchen" and "For Annabelle".  For a band that had once been so pitch-perfect in restraint on Everything (such as single "Funeral"), it’s rather disappointing that their touching side never rises above the decentness of "Factory" or harmony-laden closer "Neighbor", save for Everything-like "Laredo".

However, when Band of Horses embrace the upside of alt-country, the returns are definitely greater.  "Laredo" has a bit of that upswing, but more fun & catchy is the preceding "Compliments", while Arms‘s standouts are later pieces "Older" and "NW Apt.", the former a country-twang sway done very well, the latter a rockin’ forward progression.  Even the laid-back pop with keys "Dilly" is brighter in its enjoyable nature.

After finishing touring Cease to Begin, Band of Horses dropped off the radar a bit, and switched labels, from Seattle indie imprint Sub Pop (Wolf Parade, Beach House) to Mississippi’s more country-rock Fat Possum (The Black Keys, The Heartless Bastards).  If that disappearance made their earlier material less instantly able to be remembered, than that’s probably for the best, whether making songs like "Laredo" seem fresher, or putting Infinite Arms less up against Everything All the Time in comparison.  They may have traveled a bit too far in the country trail of alt-country, but it’s still an enjoyable ride.