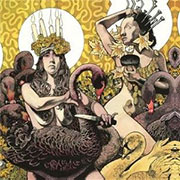 Often classified in the metal genre and having been compared in the past to the likes of Mastodon (QRO album review) and The Sword (QRO live review), it’s easy to see that Baroness is influenced and has at times participated in said genre, but their most recent album Yellow & Green is really more of a progressive rock offering as opposed to a straight up metal album.  At times it is reminiscent of a classic rock feel similar to Pink Floyd or Led Zeppelin.

“Cocainium” is a standout song on the Yellow half of the album with its highly ‘70s vibe and use of organs.  Green opens with a rather epic offering in the song “Green Theme” with its drastic dynamics and hard-hitting drumbeat.

One of the interesting things about this band is the vocals of lead singer/guitarist John Baizley.  He isn’t much of a skilled vocalist by traditional terms, but that doesn’t come as a hindrance to the bigger picture of Baroness.  When it comes right down to it, his voice isn’t remarkable, but that is encouraging in the sense that it fits with the bigger picture of what these guys are going for – a more analog pure sound instead of an overly produced altered one.

The long and short of it is that this is an entertaining and skillfully-crafted album, but ultimately it doesn’t fully deliver on what one might expect from it in terms of packing a punch.  It doesn’t have the power to stick with you after you’re done listening to it.  Expectations were quite high for it with regard to its potential to really soar, but there were too many missed opportunities for Baroness to really hit hard and bring more pummeling beats and memorable driving guitar riffs.  It would have been more enticing if it had more moments similar to “Green Theme” that, for lack of a better term, really made listeners want to pump their fists.  Instead it comes off a bit underwhelming in the long run.

At the end of the day, Yellow & Green is definitely interesting enough to keep listeners eager for whatever Baroness does next.  They have given us Red Album, Blue Record, and now Yellow & Green, so all they need to do in the next couple years is something having to do with orange and purple and we’ll have the full rainbow.