After a quiet day and the start to the work week in Tampa, Florida, the night was ready for something spectacular in the small district of Ybor City at... 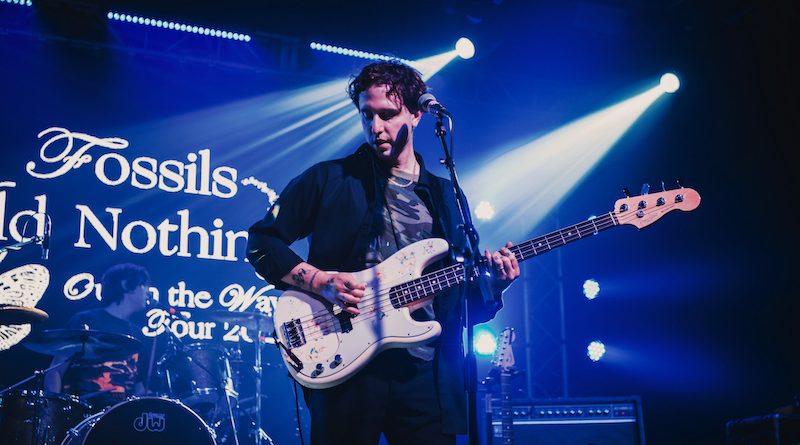 After a quiet day and the start to the work week in Tampa, Florida, the night was ready for something spectacular in the small district of Ybor City at The Ritz. On a Monday night, October 18th, indie rock band Beach Fossils brought their ‘Out In The Way Tour’ to the city, and their first show of the tour in Florida, alongside Wild Nothing and Hannah Jadagu. With the young crowd moved into the venue, the stage was set for a late night of performances from the trio.

Starting out the show was Mesquite, Texas’s Hannah Jadagu. Now residing in New York, the young 18-year-old singer first started producing her own music with her guitar, microphone, and Garageband on her iPhone 7. Jadagu released her first album, Think Too Much, just back in February, followed by two more albums this year, What Is Going On? on April 23rd and more recently All My Time Is Wasted on October 5th.

With a short wait after doors opened, Jadagu took to the stage under a wash of purple and blue lights. She quickly gave a quick greeting to the crowd before grabbing the mic for the first song of her set. Jadagu moved through her first song as her bright white braids fluttered around her on the stage, as many young fans were immediately captivated by her performance. Up on the balcony, her performance began to catch the attention of the VIP ticket holders, as they stood up from their seats to better watch her performance. Jadagu then moved to her guitar, where she played a few more songs, and announced this show as her first performance in Florida, which garnered a collection of cheers from the now enthralled crowd. Jadagu soon closed out her set and took off the stage for the transition into the next performance.

The next band on the line-up was indie rock/dream pop group Wild Nothing. The band was founded by Jack Tatum in 2009 in Blacksburg, Virginia, and now consists of Jeff Haley on bass, Nic Hessler on guitar, Cameron Allen on drums, and Joshua Sushman on keyboards and saxophone. The band signed with Captured Tracks after several successful demos, and later released their first single “Summer Holiday” in the same year of founding. By 2010, the band released their debut album Gemini (QRO review), with three more full length albums and four EPs released in the years after.

With the stage set, the five-piece took to the stage with a certain eagerness that one could only understand if they were there. Tatum immediately bid hello to his young fans before getting straight into their set. With the rays of the spotlights shining behind him, Tatum and company played out song after song with barely any breaks. As more and more poured into the venue, the crowd began to move closer and more together as the mix of teenagers and young adults all sang together and danced under the large globe lights in the venue. After an hour long set, the band closed out and stepped off stage for a short intermission before the final act.

Photos of Beach Fossils at Brooklyn Steel in Brooklyn, NY on October 28th, 2017

Live review of Beach Fossils at House of Vans in Brooklyn, NY on June 1st, 2017

Photos of Beach Fossils at CMJ 2014 in New York, NY

Photos of Beach Fossils at Baby’s All Right in Brooklyn, NY on September 26th, 2014

Photos of Beach Fossils at Bloomingdale’s in New York, NY on September 8th, 2011

The headliner on the list this night was indie rockers Beach Fossils from Brooklyn, New York. The band was first formed in 2009 by frontman Dustin Payseur a year after he moved to New York to pursue his interests in music. A year later, the band released their self-titled debut album with Captured Tracks. The band later released two more albums, with a third set for release next month; Clash The Truth (QRO review) in 2013, Somersault in 2017 (QRO review), and upcoming The Other Side of Life: Piano Ballads. Along with Payseur, the band consists of Tommy Davidson on guitar, Jack Doyle Smith on bass, and Anton Hochheim on drums.

The lights were set to a low dim as the band emerged as silhouettes into the venue. With the screams of the crowd, Payseur greeted the crowd and started straight into their set. Under glow of the purple lights and the spotlights, Payseur played through each note like a beacon in the dark venue. Lifting his guitar into the air, the frontman let a note ring out as they ended the first few songs of their setlist. The lo-fi reminiscent tone of their music played sweetly through the smoked filled room, as the guitarists and bassist strummed out chords alongside Hoccheim’s steady drums. As the set went on, Davidson raised his arms in the air to beckon the crowd to clap along with the beat, while occasionally stepping on the risers where Hoccheim sat with his drums. Towards the end of their set, Payseur asked for all the lights to be lowered and for the crowd to pull out their phones. With a hundred or more phone lights set to the stage, the band was lit up by artificial lights in front of their digital backdrop. Stepping off the stage for a few minutes, the band soon came back as the crowd yelled, “One more song!” over and over again.

Having closed out their set with a few more songs in the encore, the four members then took off their instruments and disappeared off the side of the stage and out into the night, as the young fans did the same with smiles across their faces, making their way in the Tampa night back to their cars and to their homes after a late night of dancing and singing.