The Tivoli is one of Brisbane’s few impressive venues.  A restored art-deco theatre swathed in dark red drapes and nostalgic charm.  These atmospheric surrounds formed the perfect setting... 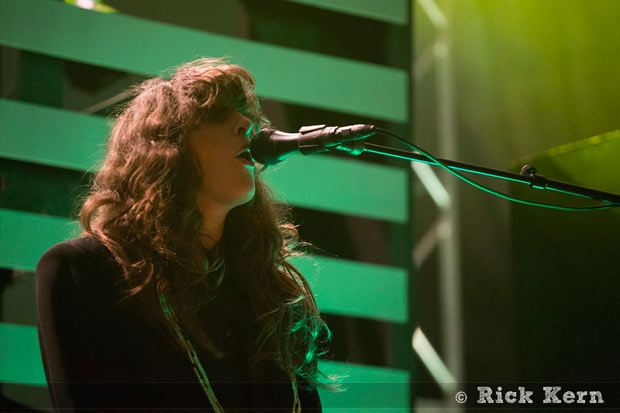 The Tivoli is one of Brisbane’s few impressive venues.  A restored art-deco theatre swathed in dark red drapes and nostalgic charm.  These atmospheric surrounds formed the perfect setting for the dream-pop musings of Baltimore’s Beach House on the evening of Friday, 11 January 2013.

The group opened with the glorious “Wild” from their latest album Bloom (QRO review) and performed throughout the evening with a clarity that was often subsumed within the auditory haze of their recorded output.  Victoria Legrand’s powerful vocals swept and soared across the crowd, bolstered by the clearly picked notes of band-mate Alex Scally, and the forceful percussive accompaniment of Daniel Franz.  The effect was incredible and left The Tivoli awash in sound.

The rest of the evening’s playlist drew evenly from their three LP’s and the crowd was receptive to each number – though older favourite’s “Norway” and “Zebra” received particular attention. It’s a tribute to their gauzy sound and their polished performance that each track segued so perfectly into the next. This effect was not hampered by the minimal between song banter that was sparse and spacey.

Photos at Beach House at House of Blues in Houston, TX on October 1st, 2015

“Myth” (QRO single review) ushered the band out for their first curtain call, a song that assumed an incredible power live, with Franz’s drumming creating an enormous, implacable momentum.  Mercifully the encore break was kept brief and the band emerged again to perform “Real Love” and “10 Mile Stereo” before closing out finally with “Irene”.  As they reached a crescendo Ms Legrand committed wholeheartedly, her voice rung out across the audience and reverberated throughout the night air.  It was the perfect track to end on, as fitting live as it is on the superb Bloom.