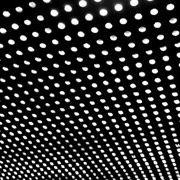 If Beach House’s songs were paintings, they would be made of long, wide brushstrokes where subtle colors often blend.  Yet again, on their fourth album, the duo coolly combines airy synths with feather-soft percussion and Victoria LeGrand’s expansive vocals in a way that resembles a painter’s calm, smooth, shoulder-driven effort.

Masterfully complex, yet barely raising the listener’s heartbeat above a patter, Bloom is gorgeously crafted in the duo’s signature sunset-drenched, daydream pop vibe.  Starting off with “Myth”, Alex Scally’s metallic, bent guitar notes mingle with a velvety drum track and LeGrand’s reverbed delivery for the duration of the album without misstepping.  Throughout, tracks wash together like gentle waves on soft sand, giving the album a perfectly consistent flow for a deeply mood-establishing experience.

It’s well past clear that Beach House found their sound a long time ago, and Bloom is strong reassurance that they’re thankfully not abandoning their tremendously charming talents anytime soon.