<img src="http://www.qromag.com/wp-content/uploads/2012/03/bearinheaveninterview.jpg" alt="Bear In Heaven : Interview" />QRO got a chance to talk to Bear in Heaven during their tour to support their upcoming third full-length <i>I Love... 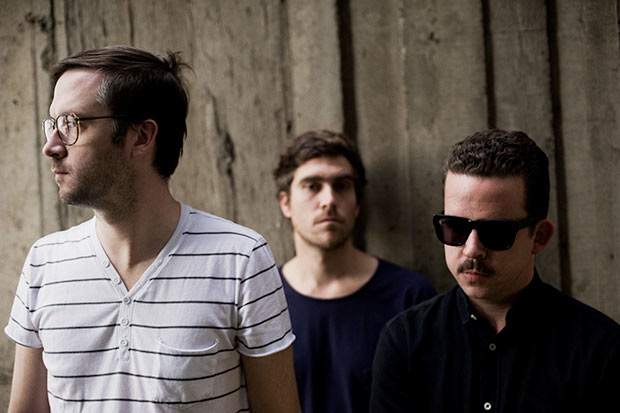 QRO got a chance to talk to Bear in Heaven during their tour to support their upcoming third full-length I Love You, It’s Cool, which comes out on April 3rd.  Singer/keyboardist Jon Philpot, guitarist/bassist Adam Wills, and drummer Joe Stickney talked about Philpot & Wills’ video production work on projects like Wondershowzen and Superjail, the unusual video for their new single "Reflection of You", their next unusual video, robots, flying squirrel suits, and more…

QRO: So you guys are from Brooklyn, but these days everyone is ‘from’ Brooklyn, so where is each of you really from?

Jon Philpot: [points to himself and AW] Georgia.  We’ve been in Brooklyn though, a long, long time.  Like eleven or ten years.

QRO: So I saw you guys streamed your new album in an interesting way.  You played it over the course of weeks.  It was stretched out and slowed down to a crawl.  You said that this was a comment on the way promotion works.  My question is about if you have any other comments or critique on other areas of the music industry that are worth poking at besides the hype cycles and all of that?

JS: Everything is worth poking at.

JP: That is true.

Adam Wills: I can’t think of anything off the top of my head that I feel particularly passionate enough to have reprinted.  Talk to me after a few more beers.  I’ll talk.

QRO: One thing that I always like to ask people who have achieved success is what they would be doing if they weren’t in their current career.  [To JP] I know you did some video work and editing.

QRO: Oh yeah?  Cool.  Well, I saw you worked on Wondershowzen, Jon.  I just have to say that I am a big fan of Wondershowzen.

AW: That’s why we’re in the band with him.  We thought Wondershowzen was cool. [laughs]

QRO: Any stories from working on that, or the Adult Swim shows you worked on like Superjail?

JP: I worked on Superjail, just kind of like pulling it down, just retiming it.  It was pretty simple.  It wasn’t as intense as Wondershowzen.  Wondershowzen was like full-on.  After I was done editing, I needed a break from reality, from everything.

QRO: Is that the connection that led to John Lee doing the "Reflection of You" video?

JP: Yeah.  We’re good friends.  Beyond just working together, those guys are good buddies of mine, so we like to hang out and work together if possible.

QRO: It seems bands are doing more multimedia stuff.  Especially with both of you working with video, is multimedia something you guys have thought about doing, either live or otherwise?

JP: We’ve done it in the past, with live projections, doing music videos, or video projects.  The music and the live show have taken over our lives for now.  Maybe we will step over another threshold where we can get our fingers into that again.

AW: We all enjoy other weird stuff besides music.

JP: We’ve been working hard on these lights and that’s kind of a different thing.  It’s kinda cool.  Joe manufactured these light things and we had a friend program them.  Adam and I sat and figured out how to make them play with the music, so it was like this whole other unknown territory.  We were like "All right.  Light show!"

AW: A journey into the unknown.

QRO: Wondershowzen definitely aimed to make the audience uncomfortable at times.  The video for "Reflection of You" does the same with all of the constant zooming.  It can be a lot for the eyes to handle.  Some people might be uncomfortable with putting something out as challenging as that.  Did you have to convince people, like at the label, to let you do that?

AW: He had to convince me, maybe.  Everybody at the record label is cool with whatever we do.  We’re not in that world where people say "No" or "That’s too weird."

JS: We work with people who signed us to their label because they respect our creative ideas, so they don’t start trying to rein people in or control what they do after they put their trust in them.

AW: I was definitely the person who was like, "Uh, our lead single is going to have a video that makes everyone nauseous?", and everyone was like "Yeah!" and I was like "Alright."

JS: I would just like to say that personally it doesn’t bother me at all.  I’m really kinda surprised by how widespread the reaction has been of people being like "It’s making me dizzy" or "I’ve had a headache for six hours after watching your video".

Bear In Heaven’s video for "Reflection of You":

QRO: So I said that I often ask what people would be doing if not what they currently do, but what’s your dream job besides music and video work, if you had to choose something else?

JP: Right now I would like to learn how to write code and make robots.

QRO: Funny, the Cognitive Science Program here at Indiana University does a lot of work with robotics.

JP: Let’s do it.  Drop the band and start making robots.

QRO: You guys seem to be willing to take chances.  If people didn’t get the video or even the way you streamed the new album, they might be weirded out.  Any plans for anything else boundary pushing or different?

AW: The live show is pretty boundary pushing too.

JS: Too bad you guys aren’t sticking around for the show. [laughs]

JS: That would be weird.  "I always wanted to see you guys, but we gotta bounce."

QRO: So an extension of the last question: What if time and money and everything else weren’t obstacles?  What crazy thing would you do then?

JS: We would have a music video where we’re all in those flying squirrel suits and we just jump off a cliff.

AW: That would be so fun.

JP: That would be crazy.  We would have to lip sync while we’re flying, and play drums.

AW: I would never bungee jump.  Maybe I would skydive, but I would do the squirrel suit like that [snaps fingers], if you could learn how to do it before you just jumped off.

QRO: I don’t know how.  How do you do that?  It’s not like skateboarding, where you screw up and skin a knee or break something.  You’re just dead.

AW: You gotta be a BASE jumper already.

JS: The guy that invented that suit died by crashing into a bridge I think.