Save Hospitality CA, an organization set up in Canada to support restaurants & venues during these tough times, brought their “Big Night In” with Broken Social Scene, Ruby Waters,... 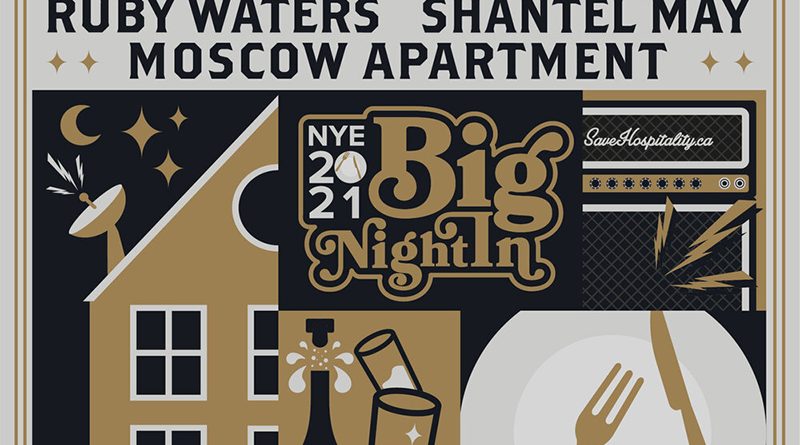 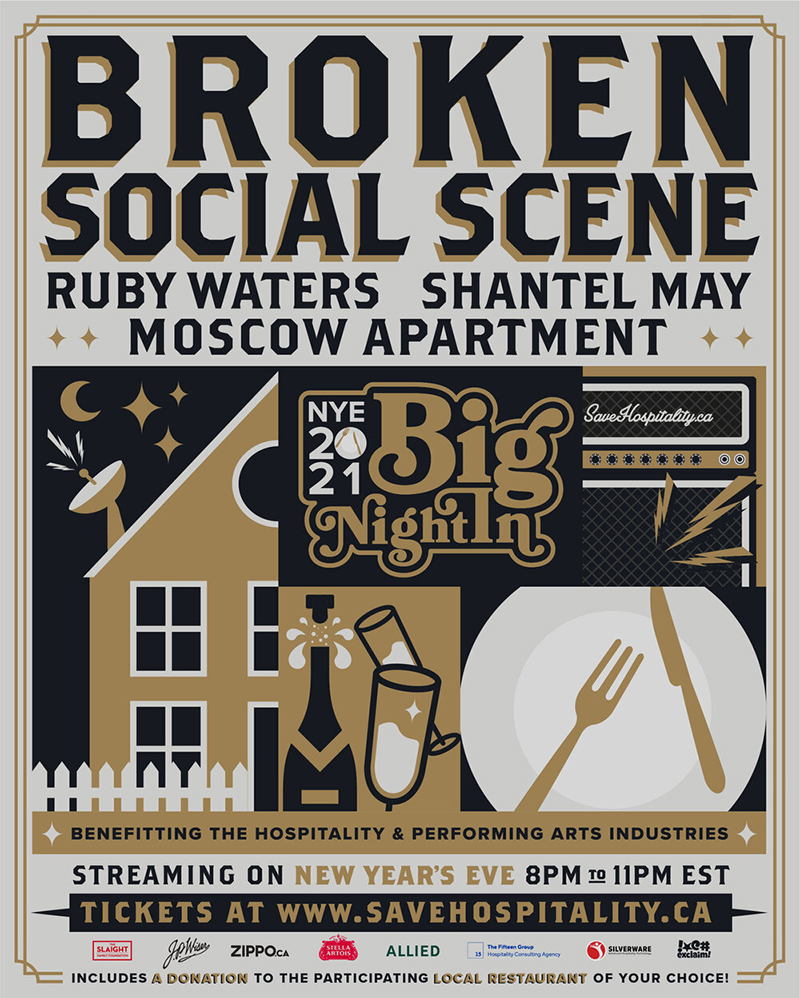 Pretty much everyone on Earth wanted 2020 to end, and it finally did, but nothing’s changed (U2 warned us…). But at least for one night, we were united in a pseudo-celebration, even if we were all at home. Times Square might have been empty, but it was, in many ways, the biggest New Year’s celebration ever. And you didn’t have to feel bad about not having a party to go to.

There were still options as to what to watch, like Andy Cohen & Anderson Cooper letting their hair down, or timing your start of an episode of Sealab 2021 so that its year would change from 2020 to 2021 at exactly midnight. Save Hospitality CA, an organization set up in Canada to support restaurants & venues during these tough times, brought their “Big Night In” with Broken Social Scene, Ruby Waters, Shantel May, and Moscow Apartment.

The livestream opened with a thanks to all those who’d bought tickets & donated to the cause, as well as a “land acknowledgement” to Canada’s First Nations. The whole thing was very Canadian, from the polite restaurant roundtable between the sets to that you had to list a Canadian address in order to buy a ticket. Indeed, one also had to pick a restaurant to support, even if you’d never been to the Great White North (your American correspondent found Save Hospitality CA’s list of Toronto restaurants, and picked one of the last in the alphabetical list, Z-Teca). There were also cocktail lessons, because it was New Year’s Eve, after all…

Moscow Apartment opened the evening at Toronto’s Paradise Theatre, sweet sounds from charming girls who described their latest release as an “ep.” Shantel May brought smooth R&B that Canada should be better known for. Ruby Waters was up-close-and-personal, a sultry songstress with soul.

But the main event was Broken Social Scene. The main face of the ‘Canadian Invasion’ of alt-acts from what seems like lifetimes ago, they’re still big names at home and welcome visitors to the U.S. (whatever the administration). The musical collective was particularly a collective this night, as they weren’t lined up in a few rows like at their usual shows, with no in-person audience meaning that they could arrange themselves more in a circle, facing towards the spotlight center for the singer. Oh, and they were all wearing masks, except for drummer Justin Peroff, because he’s the drummer and was behind plexiglass – and a barefaced guitarist/bassist Brendan Canning, perhaps because his scarf had been his mask (multi-instrumentalist Charles Spearin would put his mask beneath his chin when on horn, like the classic end of “7/4 (Shoreline)”).

Interestingly, that central spotlight was not mostly held by BSS frontman Kevin Drew. He has never been the all-eyes-on-me main man, indeed often starting shows in the back row on keys for “Late Nineties Bedroom Rock For the Missionaries” (which began this night as well), but usually just the general stage set-up would mean he was front & center. However, this circular arrangement let singer Ariel Engle really shine, and not just because she was wearing a light blue pantsuit with killer red boots, whereas all the boys looked like they’d just gotten out of bed. Even Drew, dressed mostly in black including mask, making him far less visible, had a weird cape-like thing on his shoulders that might make you rethink your crush on him. It’s never been that easy being the ‘rotating female vocalist’ in the band of boys, even with them being so welcoming – another lady singer of theirs, Stars’ Amy Millan, introduced the performance – but this night gave Engle more exposure, even in a mask.

The set was a nice mix of the band’s now long discography. There was their seminal 2003 breakthrough You Forgot It In People such as “Late Nineties” opener and closer “Anthems For a Seventeen Year-Old Girl”, which has been its own guest female vocalist draw, from Maggie Rogers last year at South-by-Southwest (QRO photos) to Moscow Apartment’s Brighid Fry & Pascale Padilla joining in this night – from the balcony. But there was also the still-applicable “Protest Song” off of 2017’s Hug of Thunder (QRO review), and guitarist Andrew Whiteman got his own “Fire Eye’d Boy” in. If Drew didn’t have a crowd to go into for “Sweetest Kill” (from 2010’s Forgiveness Rock Record – QRO review), god willing, he will again someday, and he still gave a barely sensical speech of uplift that you forgot that you needed.

2020 is finally over, somehow the longest year ever (unfortunately, the livestream finished well before the 11:00 PM end that was promised). You might not feel any different (Death Cab for Cutie warned us), and who knows when you’ll get the vaccine, we’ll get herd immunity, and restaurants & music venues will be at capacity again. But it was nice to have one Big Night In.