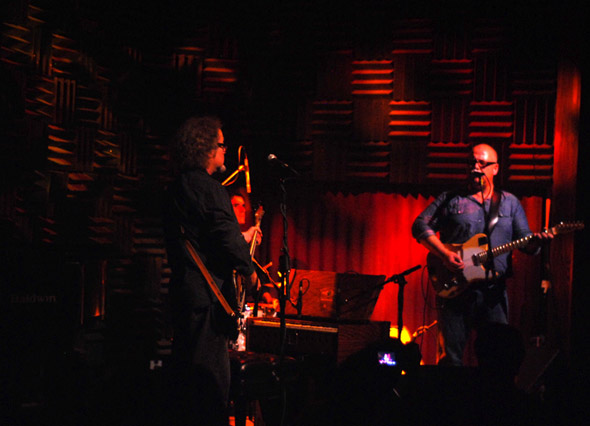 Alternative music has been around long enough now that it can have it’s own ‘venerable’ artists, the kind who started in the eighties and is still going today.  However, it’s rare for a band to last anywhere near that long (can’t all be Sonic Youth – QRO live review), so usually by now the artist is going solo, or at least fronting his or her own band, perhaps with a reunion of the old band on the side.  This can make for a tricky balancing act in the solo show of today: how much to play of the old band stuff, how much of the old solo stuff, how much of the new stuff the artist really wants to play, how much of the random audience requests, how much of the obscure, and how much of a new spin on the old?  The venerable (Frank) Black Francis, once-and-again of the iconic Pixies, just relaxed and did his thing on Sunday, September 5th at New York’s Joe’s Pub.

The third of three nights at the dining establishment-cum-venue (QRO venue review) over Labor Day Weekend, Francis’ final show was still well-attended by loyal fans (who are old enough now that they not only can afford Joe’s higher ticket & drink prices, and also probably prefer going to see Francis is a classier place like Joe’s).  Francis (real name/what he actually responds to: Charles Michael Kittridge Thompson IV) opened by telling the crowd that he was going to forgo the anecdotes so he could fit in a couple more songs in this short NYC set (“Don’t think I’m grumpy ‘cause I’m not chatting a lot…”) – and then proceeded to explain exactly why he was playing the first few songs – “I forgot to do a couple of songs I’ve been enjoying playing this month.  So I’m just gonna play them right now, before I forget.”  He then mentioned that the first song is in a movie:

Music supervisors are a little bit younger now at the movie places, ‘cause they’re starting to pick from the solo records, as opposed to the old band, which is nice.  I thought forever, “When are they going to pick from my little ol’ solo songs?”  It’s finally happening.

Adding that he appreciated it, because of [two fingers and thumb rubbing together, signaling cash money] – “Gonna get a big lunch, go shopping…”  Unfortunately, the movie Francis was talking about is box office bomb Scott Pilgrim vs. The World, so might not even be able to cover that lunch with the royalties.  But fortunately/more importantly, the song was “I Heard Ramona Sing”, of his Francis’ excellent first solo record, Frank Black (Thompson switched from his Pixies-era moniker of ‘Black Francis’ to ‘Frank Black’ when he started his solo career with the 1993 self-titled record, then reverted back to ‘Black Francis’ with 1997’s Bluefinger – QRO review) – which makes a lot more sense after being told that it’s about The Ramones (especially the line about switching members and “When someone retires / I hope they pull another Menudo”…).

Francis followed up that Frank Black song with another, the excellent “Ten Percenter”, then The Pixies’ own Trompe Le Monde classic “Planet of Sound”, and it was a night where the old stuff dominated, with only one piece from his current ‘Black Francis’ persona, “Dead Man’s Curve” from this year’s NonStopErotik (QRO review) – and Francis even semi-apologized/explained picking it, something having to do with a forties act who had their own “Dead Man’s Curve” that is the most-played song on Sirius Satellite Radio’s ‘40s station.  Instead of the newer Francis stuff, in addition to three Pixies songs total, there were three from Frank Black, three from the following Teenager of the Year, and three from 2001’s Dog In the Sand (during his five-year stretch as ‘Frank Black & The Catholics’) – and almost half of the night’s set list was on his ten-year retrospective compilation 93-03, including greatest hits collection’s bonus track, “That Burnt Out Rock ‘n’ Roll”.

But Frank Black Francis made it an oldies & an original night in a different way, by how he played his material differently.  With only drummer Todd Demma and bassist/piano man Eric Drew Feldman, Francis upped the twang considerably, especially when Feldman got on ‘Pumpy’, a pump-powered organ that they’d had shipped special from San Francisco.  The chorus of “Planet of Sound” was twang-extended, leading Francis to remark after an utterance of the chorus line, “This ain’t no planet of sound / This ain’t no fuckin’ around” that this was, indeed, ‘fuckin’ around’.  Following the fuckin’ around, Francis told everyone he was going to, “Keep this one country.  Because I like to try to do the country and western – I’m not saying I can do it…”, imploring Feldman (producer of NonStopErotik) to help him, “Keep it country.  Keep it real.”  And Feldman did just that as they played “Horrible Day”, first stopping Francis and saying that he wasn’t “quite down & dirty enough”, then that he was “thinking about it a little too much.”  Francis then stopped himself, as he was playing the wrong chord (“That’s not country…”), but, “Fourth time’s a charm…”

The über-country ways Black Francis employed could go a little into overkill, such as his rendition of Pixies-era great “Nimrod’s Son”, which got over-twang-extended.  But he followed that up with “That Burnt Out Rock ‘n’ Roll”, whose song about a burnt out rock ‘n’ roll singer was perfectly pitched (especially when Francis added during the song that it was, “Not me…”).  Frank Black & The Catholics‘s cover of “Six-Sixty-Six”, the first with ‘Pumpy’, was likewise just right, though again The Pixies’ “Where Is My Mind?” was over-country.

In the last third of the set, Black Francis threw some curveballs.  While “Bullet” unsurprisingly fit the night’s twang-y theme (there was also a self-described “nautical theme” at one point…), Teenager‘s “Calistan” was a surprise – not just in how well it fit in, but in how you’d forgotten how good it was & how much you wanted to hear it.  The Great Plains came out in “Big Red”, “Manitoba” and “Get Away Oil” (an unreleased recent outtake), before Francis did “Sing For Joy”.  The night was closed with Dog In the Sand‘s title track, then the first single from Frank Black/his solo career, the great-in-any-city “Los Angeles” – but the crowd wasn’t done with Black Francis, cheering for an encore right over the turned on lights & house music, forcing the tightwad Joe’s Pub management to allow Francis one more song, “Dead Man’s Curve”.

With any show by an artist with as long a discography as Francis, there’s obviously going to be tons of songs that you wished he played (off the top of my head, “Brackish Boy”, “Thalassocracy” – which someone did shout out, and I only just learned that it’s a real world & what it means, “Men In Black”, “I Gotta Move”, “Billy Radcliffe”, “If It Takes All Night”, “California Bound”, “Whiskey In Your Shoes”, “My Favorite Kiss”, “I Burn Today”, “Johnny Barleycorn”, “You Can’t Break a Heart and Have It”, “The Tale of Lonesome Fetter”, “Corrina” – and that’s not even counting The Pixies stuff…).  But Francis did stick to older solo stuff, which is better than his most recent Francis material – and if you want to hear Pixies, go see The Pixies reunion (QRO live review).  For this Labor Day Weekend, the ‘venerable’ Frank Black Francis was working as he had lo these many years.