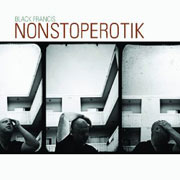 Black Francis, a.k.a. Frank Black, a.k.a. Charles Michael Kittridge Thompson IV [note: he actually goes by ‘Charles’…] has been very busy lately, working with everyone but himself.  His original group, Pixies, have been continuing their reunion with the twentieth anniversary tour of Doolittle (QRO live review), and are rumored to even be working on new material (the lack of which has been a criticism laid at this alt-rock reunion that sparked all the others).  He teamed up with his wife Violet Clark as Grand Duchy (QRO album review).  He even worked as producer for Art Brut vs. Satan (QRO review).  Only now does he return to his solo work (done as ‘Frank Black’ from the demise of the Pixies until 2007, when he reclaimed the Pixies-era ‘Black Francis’ moniker), and while it’s good, a somewhat softer touch makes Nonstoperotik a middling release in this seminal artist’s acclaimed discography.

Even after switching up the ‘Black’ with 2007’s Bluefinger (QRO review), Francis kept on the same alt-country vocals & tones-meet-alt-rock guitars that he’s done on countless records (1998-2003 as ‘Frank Black & The Catholics’ – because he doesn’t have enough names…).  The Pixies put out a record a year in their four years, and after slowing up a bit at first as Frank Black, by the time The Catholics came on the scene, Francis restarted that level of output (and has kept it up on through the rest of the name changes).  While he’s never gotten out-and-out weak, his prolific nature can overwhelm his hard-core of fans, who probably love best whatever record of his they first heard.  And the solo-creation nature of his Frank Black Francis records only more tips anything new into the vein of ‘heard it before’ – especially as his core following likely have every record he’s made (even the never-released 2000 Sunday Sunny Mill Valley Groove Day).  Nonstoperotik doesn’t shake that feeling.

Not that it’s bad, by any stretch of the imagination.  His last solo release, 2008’s Svn Fngrs EP (QRO review) started with the weak, slightly nauseating “The Seus” before picking up, but Nonstop opener “Lake of Sin” is more back-rockin’ Francis, in maybe more of a seventies guitar vein, but still definitely the once-and-future Pixie.  From there, Nonstop mixes softer & bigger, and bigger is better: “Wheels”, “Dead Man’s Curve” and “Corrina” have a kickin’ upswing (though would have been better had they not been back-to-back-to-back on the track list, which only makes them seem more similar), and there’s a saloon nature to “Six Legged Man”, “Wild Son” and “When I Go Down On You” (also back-to-back-to-back, right after the previous trio).  Meanwhile, the sad piano & guitar to the title track, which comes after the sextet, is a little maudlin, and the high wind nature of “Rabbits”, which precedes those six, feels out of place.

But more than anything, Nonstoperotik feels like ‘another Frank Black Francis solo record’.  A bit like Life and Times (QRO review), the latest from another started-an-the-eighties band, now-solo alt-rock icon, Bob Mould (though there is unfortunately no word yet on any reunion of Hüsker Dü – QRO spotlight on), Nonstoperotik can’t outpace Francis’ stocked & accomplished back catalog.  But after doing so many new (or renewed) things, it is comfortable.