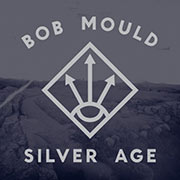 Since the 2008 & 2009 releases of District Line (QRO review) and Life and Times (QRO review), iconic alt-punk songsmith Bob Mould has been on something of a retrospective jaunt, putting out an autobiography, See a Little Light (QRO review), playing Copper Blue, his seminal album with nineties band Sugar, in full (QRO photos), and has re-released Sugar’s Copper Blue, Beaster, and File Under: Easy Listening as deluxe editions (QRO deluxe editions review).  But he’s also moved to indie-gone-big Merge Records (Arcade Fire, She & Him, Spoon), recruited a new band behind him (including drummer Jon Wurster, also of Merge Records founders Superchunk – QRO live review), and is now out with Silver Age.  While it doesn’t reach the ultra-high pinnacles of Mould’s storied discography, it’s another solid-plus album from a comfortable veteran.

Admittedly, Mould’s age shows a bit in Silver opener “Star Machine”, as the subject matter is either incredibly dated (if he’s singing about the rock star machine of old) or a passé commentary (if he’s talking about music today).  However, the following title track hits in right on the head as Mould sings about his literal ‘silver age’, being an alt-rock musician past 50.  And whatever the words, his sound still holds up very well, an alt-punk rock force that been copied by many (see: The Foo Fighters – QRO album review with Mould guest-spot), but mastered by only him.

Silver Age does lack for the absolutely amazing tracks of Mould’s past – there’s no “If I Can’t Change Your Mind”, “Egøverride”, “Fortune Teller”, “Wishing Well”, or whatever your favorites are.  It’s also got no acoustic or even softer fare, which rules out the likes of “Change Your Mind”, but also the less effective material from Life and Times.  Instead, you’ve got a Bob Mould comfortable and rocking in his Silver Age.